When it comes to conserving the world’s orchids, not all forests are equal. In a paper to be published Jan. 25 in the journal Molecular Ecology, Smithsonian ecologists reveal that an orchid’s fate hinges on two factors: a forest’s age and its fungi. 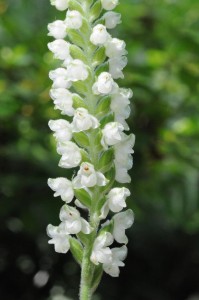 Roughly 10 percent of all plant species are orchids, making them the largest plant family on Earth. But habitat loss has rendered many threatened or endangered. This is partly due to their intimate relationship with the soil. Orchids depend entirely on microscopic fungi in the early stages of their lives. Without the nutrients orchids obtain by digesting these host fungi, their seeds often will not germinate and baby orchids will not grow. While researchers have known about the orchid-fungus relationship for years, very little is known about what the fungi need to survive.

Image right and below: Flowers (right) and leaves (below) of the orchid Goodyera pubescens, commonly known as the downy rattlesnake orchid, endangered in Florida. (Photos by Melissa McCormick/SERC) 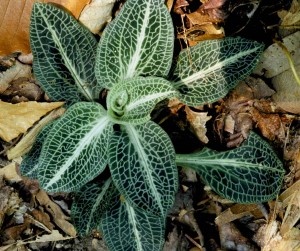 Biologists based at the Smithsonian Environmental Research Center in Edgewater, Md., launched the first study to find out what helps the fungi flourish and what that means for orchids. Led by Melissa McCormick, the researchers looked at three orchid species, all endangered in one or more U.S. states. After planting orchid seeds in dozens of experimental plots, they also added particular hostfungi needed by each orchid to half of the plots. Then they followed the fate of the orchids and fungi in six study sites: three in younger forests (50 to 70 years old) and three in older forests (120 to 150 years old). 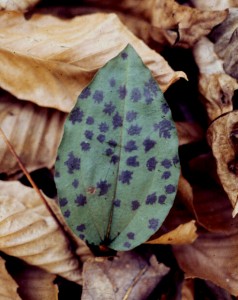 Image right and below: Leaf (right)  and flowers (below) of Tipularia discolor, the cranefly orchid, endangered in New York and Massachusetts, and threatened in Michigan and Florida.

After four years they discovered orchid seeds germinated only where the fungi they needed were abundant—not merely present. In the case of one species, Liparis liliifolia (lily-leaved twayblade), seeds germinated only in plots where the team had added fungi. This suggests that this particular orchid could survive in many places, but the fungi they need do not exist in most areas of the forest. 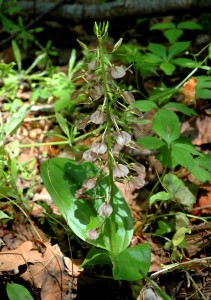 Meanwhile, the fungi displayed a strong preference for older forests. Soil samples taken from older forest plots had host fungi that were five to 12 times more abundant compared to younger forests, even where the research team had not added them. They were more diverse as well. More mature plots averaged 3.6 different Tulasnella fungi species per soil sample (a group of fungi beneficial to these orchids), while the younger ones averaged only 1.3. Host fungi were also more abundant in plots where rotting wood was added. These host fungi, which are primarily decomposers, may grow better in places where decomposing wood or leaves are plentiful.

All this implies that to save endangered orchids, planting new forests may not be enough. If the forests are not old enough or do not have enough of the right fungi, lost orchids may take decades to return, if they return at all.

“This study, for the first time, ties orchid performance firmly to the abundance of their fungi,” McCormick says. “It reveals the way to determine what conditions host fungi need, so we can support recovery of the fungi needed by threatened and endangered orchids.” –Kristen Minogue