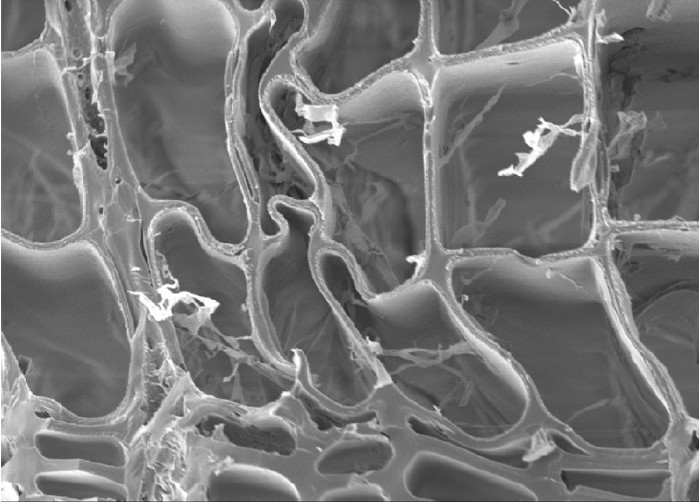 The scanning electron microscope image above shows living brown-rot fungi growing on a fragment of wood.

Scientists from the Smithsonian Museum Conservation Institute, the University of Valencia in Spain and the University of Minnesota, recently made an important observation regarding charcoals from wood fires excavated at ancient archaeological sites. They verified that the remains of fungi that had been living in the wood before it was burned could clearly be seen with a scanning electron microscope. Scientists have long known that the carbonization process preserves the anatomical structure of a wood well enough to identify its tree species. Now, new evidence shows that even the fine hyphae, mycelia and other structures of fungi living in the wood often survive the burning process and are clearly evident in wood charcoal. They are preserved well enough that scientists can sometimes distinguish between different fungi groups. 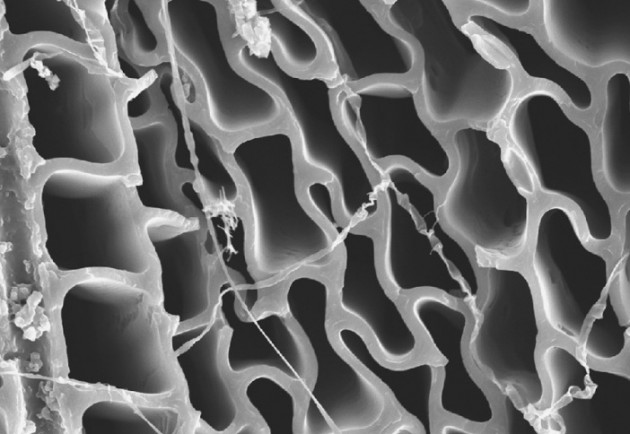 Image shows the same fragment with its fungi still visible after the wood has been turned to charcoal. (All images by Magdalena Moskal-del Hoyo)

Charcoal analysis, a science known as anthracology, is an area of archaeology that can reveal important information about the wood used by ancient civilizations and, in turn, the users themselves, says Melvin Wachowiak, a senior furniture conservator at the Smithsonian. Knowing what type of fungus infested a wood before it was burned can reveal where the wood came from and why and how it was gathered, say for firewood, a funeral pyre, building a house or other purpose. Dry wood gathered from a forest floor for cooking often has a different fungi content than fresh wood cut and dried for fires or construction. Archaeologists can use this information to better understand wood management strategies of long vanished civilizations and the environment in which they may have lived.

To confirm their findings Wachowiak and Magdalena Moskal-del Hoyo of the Department of Prehistory and Archaeology at the University of Valencia, burned hardwood and conifer wood samples infested with three primary wood fungi—brown rot, white rot and soft rot—in a laboratory, turning them into charcoal. The fungi were identified prior to burning by plant pathologist Robert Blanchette of the University of Minnesota, a co-author of the study. Then, using a scanning electron microscope, Wachowiak and Moskal-del Hoyo examined the charcoal for visual evidence of the carbonized remains of each fungus. Evidence of all three fungi was visible in the carbonized samples. 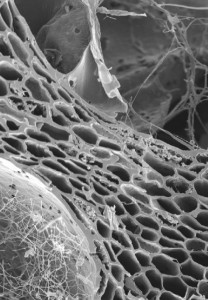 Image right: Wood mircostructure and its accompanying white-rot fungi can clearly be seen in this scanning electron microscope image of a charcoal fragment.

The scientists then compared these samples with charcoal taken from ancient archaeological sites: two Neolithic settlements in eastern Hungary, one of the Körös culture and one of the Tisza culture of Polgár-Csőszhalom, and wood from the Bronze Age necropolis of Kokótow in what is now Kraków, Poland. In their research, the scientists were careful to verify that the fungus structures they observed in the ancient charcoal samples had attacked the wood before it was burned and not after.

Other scientists have observed this phenomenon before, Moskal-del Hoyo points out. But this is the first time it has been verified “in a systematic manner,” she says, by using known fungi-infested wood samples, burning them, and then verifying that the same ultrastructure of the wood and fungi are still visible.