This view of the entire sky visible from Hawai’i by the Pan-STARRS1 Observatory is the result of half a million exposures, each about 45 seconds in length, taken over a period of 4 years. The shape comes from making a map of the celestial sphere, like a map of the Earth, but leaving out the southern quarter. The backgound is made up of billions of faint stars and galaxies. (Credit: Danny Farrow, Pan-STARRS1 Science Consortium and Max Planck Institute for Extraterrestial Physics)

The Pan-STARRS project at the University of Hawai’i Institute for Astronomy (UH IfA) is publicly releasing the world’s largest digital sky survey today from the Space Telescope Science Institute (STScI) in Baltimore, Md. The Harvard-Smithsonian Center for Astrophysics (CfA) is among the partners who contributed to the Pan-STARRS1 Surveys.

“The Pan-STARRS1 Surveys allow anyone to access millions of images and use the database and catalogs containing precision measurements of billions of stars and galaxies,” said Dr. Ken Chambers, Director of the Pan-STARRS Observatories. “Pan-STARRS has made discoveries from Near Earth Objects and Kuiper Belt Objects in the solar system to lonely planets between the stars; it has mapped the dust in three dimensions in our galaxy and found new streams of stars; and it has found new kinds of exploding stars and distant quasars in the early universe.”

“With this release we anticipate that scientists – as well as students and even casual users – around the world will make many new discoveries about the universe from the wealth of data collected by Pan-STARRS,” Chambers added.

The four years of data comprise 3 billion separate sources, including stars, galaxies, and various other objects. The immense collection contains 2 petabytes of data, which is equivalent to one billion selfies, or one hundred times the total content of Wikipedia.

The first Panoramic Survey Telescope & Rapid Response System (Pan-STARRS) observatory is a 1.8-meter telescope at the summit of Haleakala, on Maui. In May 2010, it embarked on a digital sky survey of the sky in visible and near infrared light. This was the first survey to observe the entire sky visible from Hawaii multiple times in many colors of light, with the goal of finding moving, transient, and variable objects, including asteroids that could potentially threaten the Earth. The survey took approximately four years to complete, and scanned the sky 12 times in each of five filters. 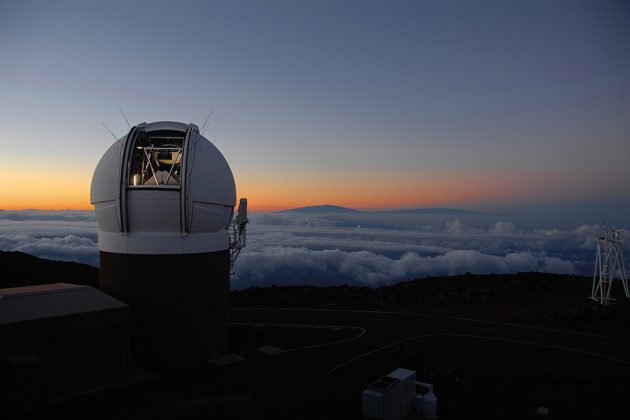 The Pan-STARRS1 Observatory on Halealakala, Maui, opens at sunset to begin a night of mapping the sky. (Photo by Rob Ratkowski)

“Achieving the high quality of the Pan-STARRS1 measurements and maintaining it over such an enormous quantity of data was a unique computational challenge and the results are a tribute to the dedicated efforts of our small team of scientists at the UH IfA and our collaborators who worked to process and calibrate the extraordinary volume of raw image data,” said Dr. Eugene Magnier, lead of the Pan-STARRS Image Processing team.

A number of CfA scientists were involved in analyzing Pan-STARRS data and extracting groundbreaking results. For example, Dr. Douglas Finkbeiner and students Edward Schlafly and Gregory Green led the effort to map the interstellar dust in the Milky Way in three dimensions. They used the colors of nearly 1 billion stars, requiring photometric calibration at a level unprecedented for ground-based surveys.

“The tiny particles in dust clouds make background stars fainter and redder, for the same reason the sky turns red at sunset,” said Dr. Finkbeiner. “In order to measure the subtle color shifts, we must know the brightnesses and colors of the stars at the percent level. With vastly more data than any human could ever look at directly, this required serious effort, and I’m proud of everyone who contributed.”

“Pan-STARRS also has given us an unprecedented view of the dynamic and transient nature of astronomical phenomena,” said CfA astronomer Dr. Edo Berger. “Our group discovered and studied new types of supernova explosions and the disruptions of stars by supermassive black holes from the Pan-STARRS data.”

The Pan-STARRS1 Surveys program was undertaken by the PS1 Science Consortium – a collaboration among 10 research institutions in four countries with support from NASA and the National Science Foundation (NSF). Consortium observations for the sky survey, mapping everything visible from Hawaii, were completed in April 2014. This data is now being released publicly.

“The cooperation between STScI and the Pan-STARRS team at the University of Hawaii has been essential to ensuring that this initial data release is successful,” explained Dr. Marc Postman, Head of the Community Missions office at STScI, and liaison between STScI and the PS1 Consortium. “STScI was a natural partner to host the Pan-STARRS public archive given its extensive experience serving astronomy data to the international community. In advance of the release of the Pan-STARRS data, STScI staff helped perform checks of data quality, helped write archive user documentation, tested and installed the local data storage and database query system, and designed, built and deployed the web-based user interfaces to the archive system.”

The rollout is being done in two stages. Today’s release is the “Static Sky,” which is the average of each of those individual epochs. For every object, there’s an average value for its position, its brightness, and its colors. In 2017, the second set of data will be released, providing a catalog that gives the information and images for each individual epoch.

The Space Telescope Science Institute provides the storage hardware, the computers that handle the database queries, and the user-friendly interfaces to access the data.

The survey data resides in the Mikulski Archive for Space Telescopes (MAST), which serves as NASA’s repository for all of its optical and ultraviolet-light observations, some of which date to the early 1970s. It includes all of the observational data from such space astrophysics missions as Hubble, Kepler, GALEX, and a wide variety of other telescopes, as well as several all-sky surveys. Pan-STARRS marks the nineteenth mission to be archived in MAST.