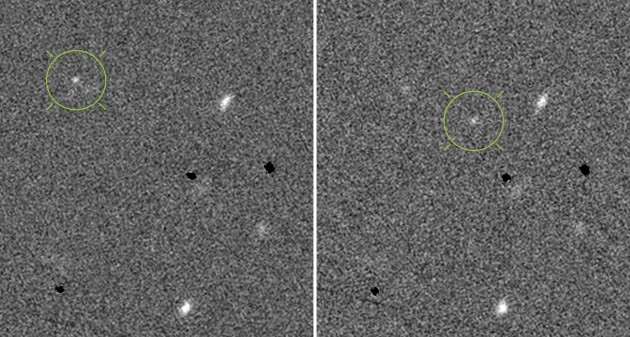 Two views of 2010 ST3 (circled in green) taken by PS1 about 15 minutes apart on the night of Sept. 16, 2010 show the asteroid moving against the background field of stars and galaxies. Each image is about 100 arc seconds across. (Click to enlarge photos)

The Panoramic Survey Telescope & Rapid Response System (Pan-STARRS) PS1 telescope has discovered an asteroid that will come within 4 million miles of Earth in mid-October. The object is about 150 feet in diameter and was discovered in images acquired on September 16, when it was about 20 million miles away.

It is the first “potentially hazardous object” to be discovered by the Pan-STARRS survey and has been given the designation “2010 ST3.”

“Although this particular object won’t hit Earth in the immediate future, its discovery shows that Pan-STARRS is now the most sensitive system dedicated to discovering potentially dangerous asteroids,” said Robert Jedicke, a University of Hawaii member of the PS1 Scientific Consortium, who is working on the asteroid data from the telescope. “This object was discovered when it was too far away to be detected by other asteroid surveys,” Jedicke noted.

The Harvard-Smithsonian Center for Astrophysics is a major partner in the Consortium. 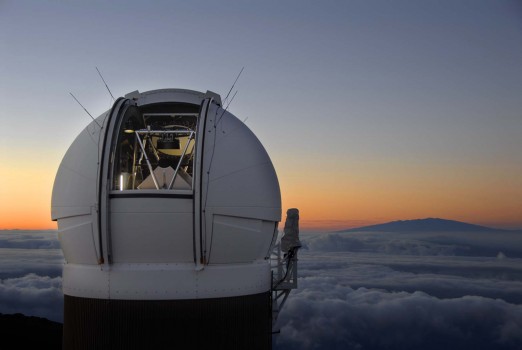 Most of the largest potentially hazardous objects have already been catalogued, but scientists suspect that there are many more under a mile across that have not yet been discovered. These could cause devastation on a regional scale if they ever hit our planet. Such impacts are estimated to occur once every few thousand years.

Timothy Spahr, director of the Minor Planet Center, said, “I congratulate the Pan-STARRS project on this discovery. It is proof that the PS1 telescope, with its Gigapixel Camera and its sophisticated computerized system for detecting moving objects, is capable of finding potentially dangerous objects that no one else has found.” The Minor Planet Center, located in Cambridge, Mass., was established by the International Astronomical Union in 1947 to collect and disseminate positional measurements for asteroids and comets, to confirm their discoveries, and to give them preliminary designations.

Pan-STARRS expects to discover tens of thousands of new asteroids every year with sufficient precision to accurately calculate their orbits around the sun. Any sizable object that looks like it may come close to Earth within the next 50 years or so will be labeled “potentially hazardous” and carefully monitored. NASA experts believe that, given several years warning, it should be possible to organize a space mission to deflect any asteroid that is discovered to be on a collision course with Earth.

Pan-STARRS has broader goals as well. PS1 and its bigger brother, PS4, which will be operational later in this decade, are expected to discover a million or more asteroids in total, as well as more distant targets such as variable stars, supernovas, and mysterious bursts from galaxies across more than half the universe. PS1 became fully operational in June 2010.–Christine Pulliam