Astronomers announced on June 16, 2010, that the first Pan-STARRS (Panoramic Survey Telescope & Rapid Response System) telescope, PS1, is fully operational. This innovative facility will be at the front line of Earth defense by searching for “killer” asteroids and comets. It will map large portions of the sky nightly, making it an efficient sleuth for not just asteroids but also supernovae and other variable objects. 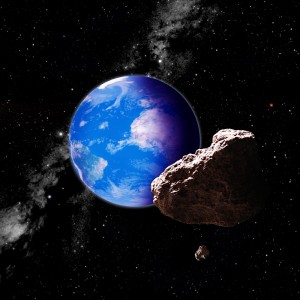 Image right: Asteroids that cross Earth’s orbit, like the one shown in this artist’s conception, threaten to impact our planet. The new Pan-STARRS observatory offers our first line of defense, surveying huge swaths of the sky every night looking for moving objects. (Artwork by David A. Aguilar)

PS1 has been taking science-quality data for six months, but now we are doing it dusk-to-dawn every night,” says Dr. Nick Kaiser (University of Hawaii Institute for Astronomy, or IfA), the principal investigator of the Pan-STARRS project.

Pan-STARRS will map one-sixth of the sky every month. By casting a wide net, it is expected to catch many moving objects within our solar system. Frequent follow-up observations will allow astronomers to track those objects and calculate their orbits, identifying any potential threats to Earth. PS1 also will spot many small, faint bodies in the outer solar system that hid from previous surveys.

“PS1 will discover an unprecedented variety of Centaurs [minor planets between Jupiter and Neptune], trans-Neptunian objects, and comets. The system has the capability to detect planet-size bodies on the outer fringes of our solar system,” said Smithsonian astronomer Matthew Holman.

Pan-STARRS features the world’s largest digital camera–a 1,400-megapixel (1.4 gigapixel) monster. With it, astronomers can photograph an area of the sky as large as 36 full moons in a single exposure. In comparison, a picture from the Hubble Space Telescope’s WFC3 camera spans an area only one-hundredth the size of the full moon (albeit at very high resolution). 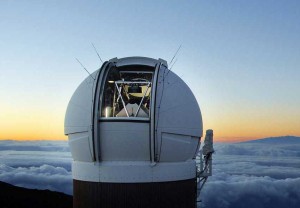 Its sensitive digital camera was rated as one of the “20 marvels of modern engineering” by Gizmo Watch in 2008. Inventor Dr. John Tonry (IfA) said, “We played as close to the bleeding edge of technology as you can without getting cut!”

Each image, if printed out as a 300-dpi photograph, would cover half a basketball court, and PS1 takes an image every 30 seconds. The amount of data PS1 produces every night would fill 1,000 DVDs.

“As soon as Pan-STARRS turned on, we felt like we were drinking from a fire hose!” said Berger. He added that they are finding several hundred transient objects a month, which would have taken a couple of years with previous facilities.

Located atop the dormant volcano Haleakala, Pan-STARRS exploits the unique combination of superb observing sites and technical and scientific expertise available in Hawaii. Funding for the development of the observing system was provided by the U.S. Air Force.

The PS1 Surveys have been made possible through contributions of the PS1 Science Consortium (PS1SC): IfA; the Pan-STARRS Project Office; the Max-Planck Society and its participating institutes, the Max Planck Institute for Astronomy, Heidelberg, Germany and the Max Planck Institute for Extraterrestrial Physics, Garching, Germany; the Johns Hopkins University; the University of Durham; the University of Edinburgh; the Queen’s University Belfast; the Harvard-Smithsonian Center for Astrophysics; the Los Cumbres Observatory Global Telescope Network, Inc.; and the National Central University of Taiwan.Headquartered in Cambridge, Mass., the Harvard-Smithsonian Center for Astrophysics (CfA) is a joint collaboration between the Smithsonian Astrophysical Observatory and the Harvard College Observatory. CfA scientists, organized into six research divisions, study the origin, evolution and ultimate fate of the universe.