In the outer reaches of our solar system lies a mysterious region far more remote and difficult to explore than the Australian outback. It remains the only part of our solar system not visited by spacecraft. Called the Kuiper Belt, this area beyond Neptune is home to the dwarf planets Pluto, Eris, Makemake, and Haumea. It also harbors thousands of smaller objects that form a second, icy asteroid belt (or more appropriately, comet belt). In this realm of perpetual twilight, the distant sun looks like just another bright star.

A new telescope has begun to virtually explore the solar system outback, and already is scoring discoveries. The Panoramic Survey Telescope & Rapid Response System (Pan-STARRS) PS1 telescope has found ten Kuiper Belt residents. Based on their brightnesses, the newfound objects range in size from 180 to 300 miles (300 to 500 km). 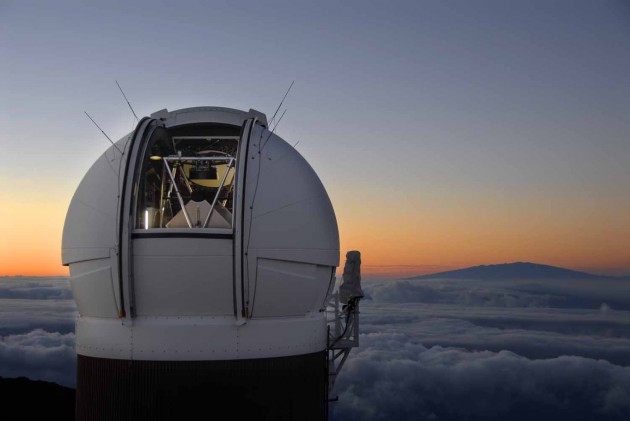 “It marks the tip of the iceberg for future Pan-STARRS discoveries,” he added.

Holman presented the findings in a press conference at the 217th meeting of the American Astronomical Society.

The Outer Solar System Key Project is part of a larger survey to which 60 percent of Pan-STARRS telescope time will be devoted. Over the course of the coming months and years, PS1 will repeatedly survey the full sky that is visible from its location on Haleakala, spotting objects as faint as magnitude 23 (10 million times fainter than visible to the unaided eye). “The survey is expected to find a whole range of objects from small, nearby asteroids to possibly more dwarf planets,” stated Harvard astronomer Pavlos Protopapas

“By the end of the survey, we’ll have an essentially complete census of everything brighter than the survey’s limiting magnitude,” said Holman. This corresponds to Kuiper Belt Objects about 180 miles in diameter or larger. 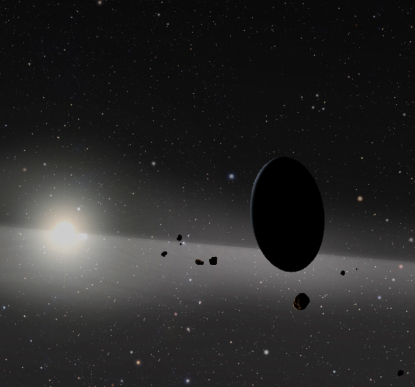 his artist’s conception shows the dwarf planet Haumea, which is in the Kuiper Belt. Pan-STARRS is expected to find hundreds of new Kuiper Belt Objects during its operational lifetime. (Harvard-Smithsonian Center for Astrophysics)

“Pan-STARRS-1 offers us a remarkable opportunity to study the outer solar system in unprecedented detail,” said team member Ying-Tung Chen, a graduate student at the National Central University of Taiwan.

Pan-STARRS will allow planetary astronomers to locate many new Kuiper Belt Objects and characterize their orbits. This will provide a firmer understanding of the structure, dynamics, and evolution of the outer solar system. Pan-STARRS is also likely to be a productive tool for discovering new comets.

Pan-STARRS-1 is a 1.8-meter (71-inch) telescope featuring the world’s largest digital camera — a 1.4-gigapixel (1,400-megapixel) monster that can photograph an area of the sky as large as 36 full moons in a single exposure. PS1 became fully operational in June 2010.

The Pan-STARRS Project is being led by the Institute for Astronomy, of the University of Hawaii and exploits the unique combination of superb observing sites and technical and scientific expertise available in Hawai’i. Funding for the development of the observing system has been provided by the US Air Force. The PS1 Surveys have been made possible through contributions of the Institute for Astronomy, the University of Hawai’i, the Pan-STARRS Project Office, the Max-Planck Society and its participating institutes, the Max Planck Institute for Astronomy, Heidelberg and the Max Planck Institute for Extraterrestrial Physics, Garching, The Johns Hopkins University, the University of Durham, the University of Edinburgh, the Queen’s University Belfast, the Harvard-Smithsonian Center for Astrophysics, the Los Cumbres Observatory Global Telescope Network, Incorporated, the National Central University of Taiwan, and the National Aeronautics and Space Administration under Grant No. NNX08AR22G issued through the Planetary Science Division of the NASA Science Mission Directorate. Any opinions, findings, and conclusions or recommendations expressed in this press release are those of the author(s), and do not necessarily reflect the views of the National Aeronautics and Space Administration.