Astronomers at the University of Hawaii at Mānoa have discovered a new comet that they expect will be visible to the naked eye in early 2013.

Animation showing the C/2011 L4  (PANSTARRS) comet moving against the background of stars. Images taken at the Pan-STARRS 1 Telescope on the night of June 5-6, 2011. Click image to see animation.

Originally found by the Pan-STARRS 1 telescope on Haleakala, Maui, on the night of June 5-6, it was confirmed to be a comet by UH Mānoa astronomer Richard Wainscoat and graduate student Marco Micheli the following night using the Canada-France-Hawaii Telescope on Mauna Kea.

A preliminary orbit computed by the Minor Planet Center at the Smithsonian Astrophysical Observatory in Cambridge, Mass., shows that the comet will come within about 30 million miles of the sun in early 2013, about the same distance as Mercury. The comet will pose no danger to Earth.

“The comet has an orbit that is close to parabolic, meaning that this may be the first time it will ever come close to the sun, and that it may never return,” says Wainscoat. 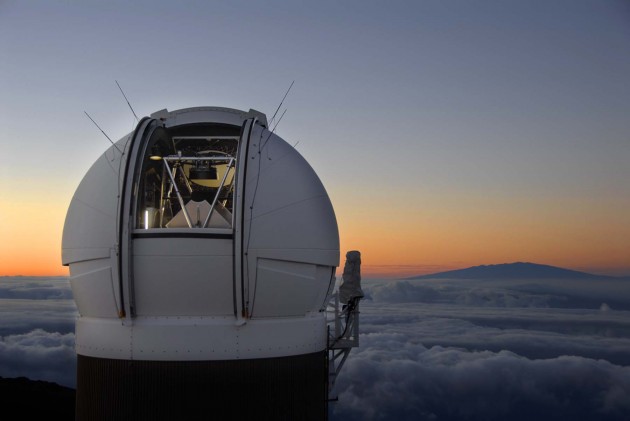 The Pan-Starrs telescope on Maui.

The comet is named C/2011 L4 (PANSTARRS). Comets are usually named after their discoverers, but in this case, because a large team, including observers, computer scientists, and astronomers, was involved, the comet is named after the telescope. C/2011 L4 (PANSTARRS) most likely originated in the Oort cloud, a cloud of comet-like objects located in the distant outer solar system.

It is now about 700 million miles from the sun, placing it beyond the orbit of Jupiter. It is currently too faint to be seen without a telescope with a sensitive electronic detector.  C/2011 L4 (PANSTARRS) is expected to be brightest in February or March 2013, when it makes its closest approach to the sun.

Over the next few months, astronomers will continue to study the comet, which will allow better predictions of how bright it will eventually get.

Comets like C/2011 L4 (PANSTARRS) offer astronomers a rare opportunity to look at pristine material left over from the early formation of the solar system.

The comet was found while searching the sky for potentially hazardous asteroids—ones that may someday hit Earth.