An 880-pound asteroid moving at 38,000 miles per hour hit the moon last September with a blast equivalent to 15 tons of TNT. While errant asteroids have graced Moon and Earth with their fiery and explosive presence for millennia, for the first time humans may soon return the favor by blasting on a few asteroids.

There has been much hype recently about the possibility of new start-up private companies–including one backed by James Cameron–being able to harvest water and precious metals from asteroids flying near the Earth. Known as Near Earth Asteroids or NEAs, these asteroids have been touted as reservoirs of trillions of dollars of untapped resources ready for the taking. Are asteroids floating mines that we can use in the future to augment Earth’s depleting resources? To separate fact from science fiction on this subject Smithsonian Science writer Micaela Jemison turns to astrophysicist and asteroid mining researcher Martin Elvis of the Harvard-Smithsonian Center for Astrophysics with a few questions.

Q: First, what is an asteroid and what kinds of materials might we harvest from one?

Martin Elvis: An asteroid is a big rock floating in space. They come in all shapes and sizes, from several hundred miles across to basketball size. They also come in a lot of different compositions, from a solid lump of iron to carbonaceous material unchanged from the beginning of our solar system.

This animation consists of 57 separate images captured by the Japanese Hayabusa spacecraft in 2005 as the tiny asteroid Itokawa (535 by 294 by 209 meters in size) rotated underneath it.

Q: What characteristics must an asteroid have to be considered a good candidate for mining?

Martin Elvis: An asteroid must have at least $1 billion worth of material that we want to make mining it worth the investment. Space is expensive!  Finding out what asteroids are made of is tricky. We can’t take samples from the hundreds of thousands of asteroids out there. Instead we can make estimates by taking observations with telescopes.

With a telescope we can tell if an asteroid is made of solid iron, lumps of stone or carbonaceous material from space, because each material reflects a different color of light. This reflection can only give us an indication of what is on an asteroid’s surface, not of what is underneath. This information is valuable as it enables us to narrow the field to a few asteroids possibly suitable for mining. As the platinum metals we are interested in harvesting are found dissolved in iron, asteroids with large amounts of iron would be one the first ones we would investigate. Telescopes can only get you so far. The next step is to send a robotic probe to do further prospecting. 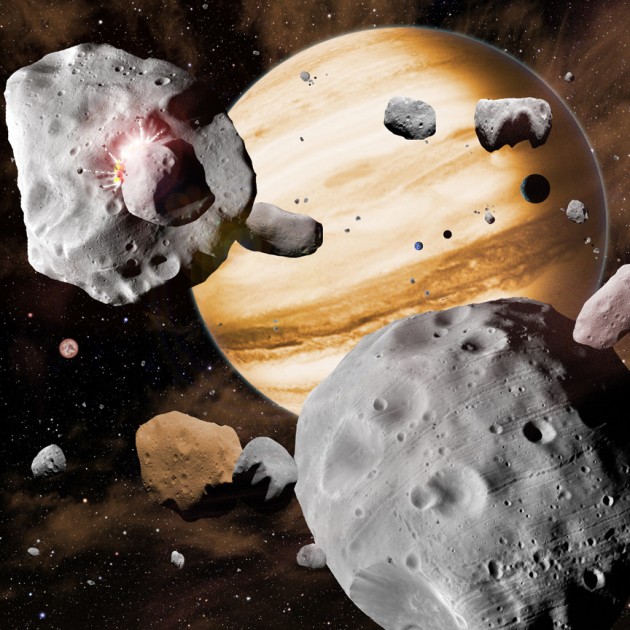 In this artist’s conception, Jupiter’s migration through the solar system has swept asteroids out of stable orbits, sending them careening into one another. (Image by David A. Aguilar)

For an asteroid to be worth testing, it first has to be easy to reach and not just in terms of how far away it is. We are doing a lot of research in identifying asteroids that are in similar orbits around the sun as the Earth, as these are the easiest asteroids to get to. We call these Near Earth Asteroids or NEAs. Once we have found some asteroids on the same path as the Earth, then distance comes into play as our rockets can go only so fast. Time is money for asteroid mining and the longer it takes the rockets to get the asteroid the more expensive it will be!

Q: Do we know where all the Near Earth Asteroids are in our solar system?

Martin Elvis: Not at all! We know where almost all the big ones are, those greater than half a mile across, but those as small as only 100 yards across, we only know a few percent. There are thousands and thousands left to be found. This is what I am trying to work on – identifying the NEAs and their orbits, as well as assessing their suitability for mining. The great thing is we don’t need to develop new technology to do this; many telescopes already have the capacity to do this work. We just need a lot more time with these telescopes and the right instruments to find out what all these asteroids are made of.

Q: How do the robotic probes identify what the Near Earth Asteroid is made of beneath the surface?

Elvis: The robotic probes need to get up and personal with the NEAs but preferably they wouldn’t touch the surface of the asteroid. A delicate spacecraft interacting with thousands of tons of space rock makes for a dangerous and complicated mission. We’d prefer to keep the probes a few hundred yards above the surface where they can assess what is underneath by measuring X-rays from the sun being reflected off the asteroid. These reflected X-rays give very clear signatures of the different elements beneath the surface. In looking for water, however, we may use a different technique – shooting a laser at the surface. As the laser creates a hole we can measure the water vapor escaping from the hole using a spectrometer. These techniques are still being developed and need work.

Q: How would we get the materials we harvest back down to earth?

Martin Elvis: After sending the probes to do the prospecting we would send out very large rockets and automated mining robots to collect the material. I think we would want to practice the mining operation locally first before setting off into space. NASA has had similar ideas and they plan to practice first by bringing back an asteroid and “parking” it somewhere in the orbit of the moon so they can experiment with mining techniques there. This practice plan could happen as early as 2020 to 2025.

This technique could also be used when trying to harvest water from NEA’s. Water can make up to 20 percent of the mass in some asteroids. One billion dollars worth of water found in suitable NEAs to be brought back to an orbit in Earth-moon space would mean moving an asteroid of 1,200 tons. That’s not much more than NASA is planning to move, and could make for a worthwhile venture. 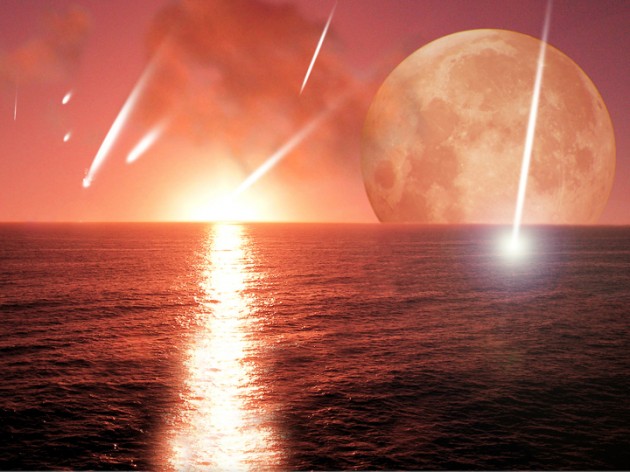 Astronomers have theorized that long-ago asteroid impacts delivered much of the water now filling Earth’s oceans, as shown in this artist’s conception. If true, the stirring provided by migrating planets may have been essential to bringing those asteroids.

Asteroids containing enough platinum to make mining worthwhile would be too large to drag to Earth-moon space. For those asteroids the metal would have to be remotely extracted. We would just transport the refined metals required back to Earth, and only 200 tons are needed to yield $1 billion, so that could make the venture financially viable. Still, there is a lot of technology that needs to be developed.

Q: This venture would take a lot of money. If there are very few Near Earth Asteroids with the materials we want, is it worth the investment?

Martin Elvis: We don’t know for sure, but I’m bullish on NEA mining. When investing in a capitalist venture like this you are always taking a risk. Mining the first few asteroids will be the most difficult, both from a financial investment and technological standpoint. Once the first few operations start making big profits then the cost of getting into space will come down. The rockets will become more powerful and that will result in many more NEAs becoming worthwhile to mine. As with most technology the greatest cost is at the beginning of development. All we need is a few good asteroids!