A favorite target of backyard skygazers and professional astronomers alike, the Orion Nebula is a region of terrible beauty. Within its gaseous folds, massive stars dozens of times heavier than our sun flare into existence, only to blow apart a few million years later. Planets struggle to form amidst powerful radiation and strong stellar winds. Any that survive are soon blasted by shock waves from nearby supernovae. The nebula is a realm of birth and death, but it is the birth process in this violent part of the universe that most intrigues astronomers.

The way that massive stars form remains mysterious, in part, because massive stars are rare and tend to spend their youth shrouded by dust and gas and hidden from view.

“We know how these stars die, but not how they are born,” says Lincoln Greenhill of the Harvard-Smithsonian Center for Astrophysics. 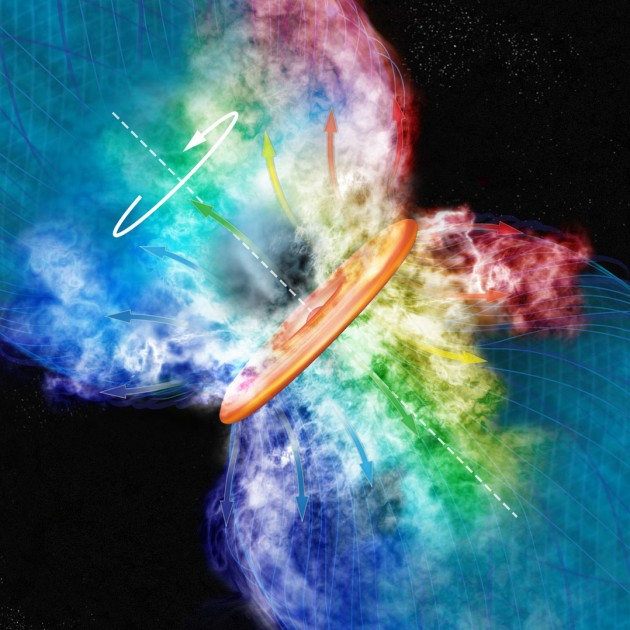 This image is an artist’s conception of the “boiling disk” surrounding the massive young stellar object known as Orion Source I. A disk of hot, ionized gas surrounds the central star, blocking our view. A cool wind of gas is driven from the upper and lower surfaces of the disk—as indicated by the colored arrows—and is sculpted into an hourglass shape by tangled magnetic field lines—shown as thin blue lines. This outflow is lit up by emission from silicon monoxide molecules – emission that has been imaged and tracked by radio astronomers month-to-month. The entire disk and wind are rotating. Image by Bill Saxton.

From a series of observations, they created a new, high-resolution time-lapse movie of gas moving around and away from the young protostar. The movie provides strong evidence that massive stars form very much like their smaller siblings.

“In astronomy, it is rare to see changes over the course of a human lifetime. With this new movie, we can see changes over just a few months as gas clumps swarm around this young protostar,” says CfA astronomer Elizabeth Humphreys.

Sadly, the outlook for planet formation in this system is disappointing. Since the protostar is a massive type B star, planets are unlikely to form around it despite the presence of plenty of raw material. The star’s ferocious heat vaporizes any dust closer than the distance of Pluto’s orbit from our sun. Moreover, the star will live for only a few million years before exploding—not enough time for the slow, planet-building process to succeed.

So even though full-grown B stars like Vega or Sirius are well known to Earthly skywatchers, shining as bright beacons in the night sky, it is unlikely that they will have many planets orbiting around them.