Most skygazers recognize the Orion Nebula, one of the closest stellar nurseries to Earth. Although it makes for great views in backyard telescopes, the Orion Nebula is far from the most prolific star-forming region in our galaxy. That distinction may go to one of the more dramatic stellar nurseries like the Cat’s Paw Nebula, otherwise known as NGC 6334, which is experiencing a “baby boom.” 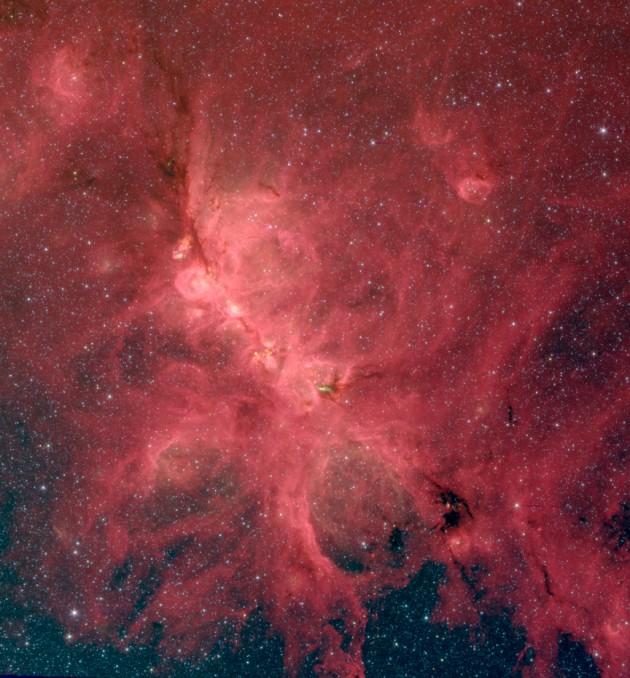 NGC 6334, also known as the Cat’s Paw Nebula, comes alive in this infrared image from the Spitzer Space Telescope. NGC 6334 is forming stars so rapidly that it is undergoing a “mini-starburst.” Young stars are heating surrounding dust, causing it to glow. In this representative-color photo red shows light at a wavelength of 8 microns, green is 4.5 microns, and blue is 3.6 microns. (Image by S. Willis (CfA); NASA/JPL-Caltech/SSC)

“NGC 6334 is forming stars at a more rapid pace than Orion – so rapidly that it appears to be undergoing what might be called a burst of star formation,” said lead author Sarah Willis of the Harvard-Smithsonian Center for Astrophysics (CfA) and Iowa State University. “It might resemble a ‘mini-starburst,’ similar to a scaled-down version of the spectacular bursts sometimes seen in other galaxies.”

Willis presented a new study of NGC 6334 Wednesday, June 5, in a press conference at a meeting of the American Astronomical Society. 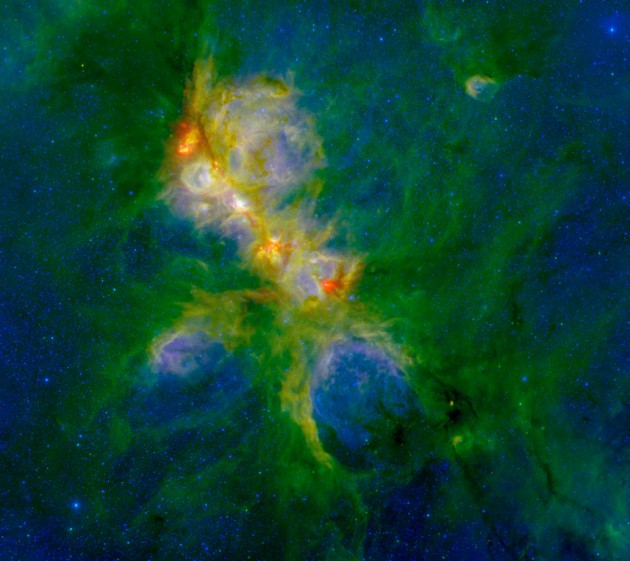 This representative-color photo of NGC 6334 combines infrared data from the Herschel and Spitzer spacecraft and ground-based NEWFIRM instrument. Warm dust, illuminated by the high-mass stars that are scattered throughout the cloud complex, shows up in green. The red and orange spots mark the very massive young stars that are just forming within the nebula. The dark clouds, primarily at the upper left and lower right of the image, mark the densest areas where the next generation of stars will form. The hazy blue-white regions mark where the light emitted by the hot young stars is reflected back to us by the remaining dust and gas. In this photo red shows light at a wavelength of 70 microns, green is 8 microns, and blue is 1.2 microns. (Credit: S. Willis (CfA); ESA/Herschel ; NASA/JPL-Caltech/SSC; CTIO/NOAO/AURA/NSF)

NGC 6334 is a realm of extremes. The nebula contains about 200,000 suns’ worth of material that is coalescing to form new stars, some with up to 30 to 40 times as much mass as our Sun. It houses tens of thousands of recently formed stars, more than 2,000 of which are extremely young and still trapped inside their dusty cocoons. Most of these stars are forming in clusters where the stars are spaced up to a thousand times closer than the stars in the Sun’s neighborhood.

The cause of the baby boom in NGC 6334 isn’t clear. Two processes often suggested to trigger bursts of star formation are blast waves from a nearby supernova explosion, or molecular cloud collisions when galaxies smash together. Neither is the case here.

That mystery is one reason why astronomers are interested in NGC 6334. Rapid star formation is often seen in luminous starburst galaxies (like the Antennae galaxies for example). Because NGC 6334 is nearby, astronomers can probe it in much greater detail, even down to counting the numbers of individual stars of various types and ages.

Starbursts also light up galaxies in the early universe, making them bright enough to study. The processes that produce these distant bursts are equally puzzling and even harder to study in detail because the objects appear so small and faint.

“Young galaxies in the early universe are small smudges of light in our telescopes, and we can only study the collective processes over the whole galaxy. Here in NGC 6334, we can count the individual stars,” explained co-author Howard Smith of the CfA.

The region was observed with the Spitzer Space Telescope and the Blanco telescope at the Cerro-Tololo Inter-American Observatory. “Both space and groundbased observations were needed to identify the young stars,” said Lori Allen (National Optical Astronomy Observatory), the principle investigator of the observations.

The starburst in NGC 6334 began relatively recently and will last for only a few million years – a blink of the eye on cosmic timescales.

“We’re lucky, not only because it’s nearby but also because we’re catching it while the starburst is happening,” said Willis.

In the future, NGC 6334 will resemble multiple Pleiades star clusters, each filled with up to several thousand stars. Unfortunately, it won’t look as impressive as the Pleiades to Earthbound telescopes because it is more than ten times farther away, at a distance of 5,500 light-years, and its location in the galactic plane obscures the region behind a lot of dust.

NGC 6334, in the constellation Scorpius, spans a distance of about 50 light-years and covers an area on the sky slightly larger than the full Moon.