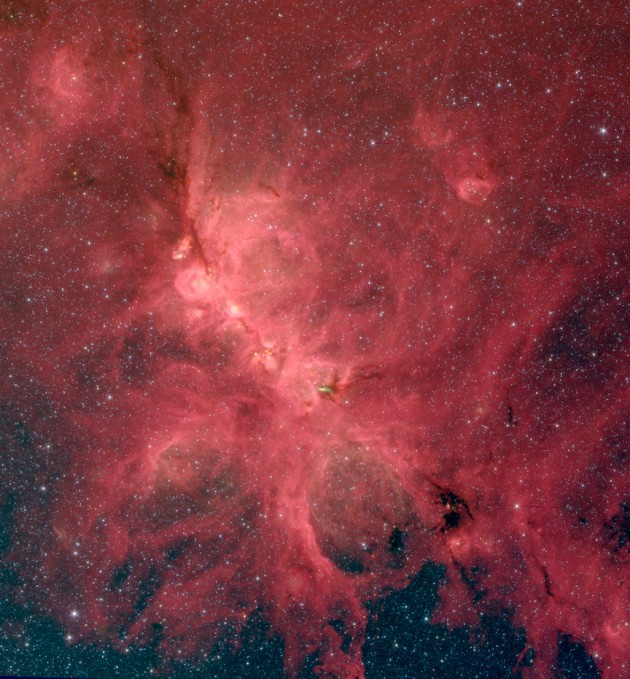 The Cat’s Paw Nebula, also known as NGC 6334, comes alive in this infrared image from the Spitzer Space Telescope. A new study of this nebula finds that magnetic fields influence star formation on a variety of scales, from hundreds of light-years down to a fraction of a light-year. In this representative-color photo red shows light at a wavelength of 8 microns, green is 4.5 microns, and blue is 3.6 microns. (Image credit: S. Willis, CfA & NASA/JPL-Caltech/SSC)

Stars form when gravity pulls together material within giant clouds of gas and dust. But gravity isn’t the only force at work. Both turbulence and magnetic fields battle gravity, either by stirring things up or by channeling and restricting gas flows, respectively. New research focusing on magnetic fields shows that they influence star formation on a variety of scales, from hundreds of light-years down to a fraction of a light-year.

The new study, which the journal Nature is publishing online on March 30th, probed the Cat’s Paw Nebula, also known as NGC 6334. This nebula contains about 200,000 suns’ worth of material that is coalescing to form new stars, some with up to 30 to 40 times as much mass as our sun. It is located 5,500 light-years from Earth in the constellation Scorpius.

The team painstakingly measured the orientation of magnetic fields within the Cat’s Paw. “We found that the magnetic field direction is quite well preserved from large to small scales, implying that self-gravity and cloud turbulence are not able to significantly alter the field direction,” said lead author Hua-bai Li (The Chinese University of Hong Kong), who conducted the high-resolution observations while a post-doctoral fellow at the Harvard-Smithsonian Center for Astrophysics (CfA).

“Even though they’re much weaker than Earth’s magnetic field, these cosmic magnetic fields have an important effect in regulating how stars form,” added Smithsonian co-author T.K. Sridharan (CfA).

“The SMA has made significant contributions in this field which continues with this work,” said Smithsonian co-author Qizhou Zhang (CfA).

Because dust grains align themselves with the magnetic field, the researchers were able to use dust emission to measure the field’s geometry. They found that the magnetic fields tended to line up in the same direction, even though the relative size scales they examined were different by orders of magnitude. The magnetic fields only became misaligned on the smallest scales in cases where strong feedback from newly formed stars created other motions.

This work represents the first time magnetic fields in a single region have been measured at so many different scales. It also has interesting implications for the history of our galaxy.

When a molecular cloud collapses to form stars, magnetic fields hinder the process. As a result, only a fraction of the cloud’s material is incorporated into stars. The rest gets dispersed into space, where it is available to make new generations of stars. Thanks to magnetic fields, the star-forming process is more drawn out.