Defining what makes a star “Sun-like” is as difficult as defining what makes a planet “Earth-like.” A solar twin should have a temperature, mass, and spectral type similar to our Sun. We also would expect it to be about 4.5 billion years old. However, it is notoriously difficult to measure a star’s age so astronomers usually ignore age when deciding if a star counts as “Sun-like.”

A new technique for measuring the age of a star using its spin – gyrochronology – is coming into its own. Today astronomers are presenting the gyrochronological ages of 22 Sun-like stars. Before this, only two Sun-like stars had measured spins and ages. 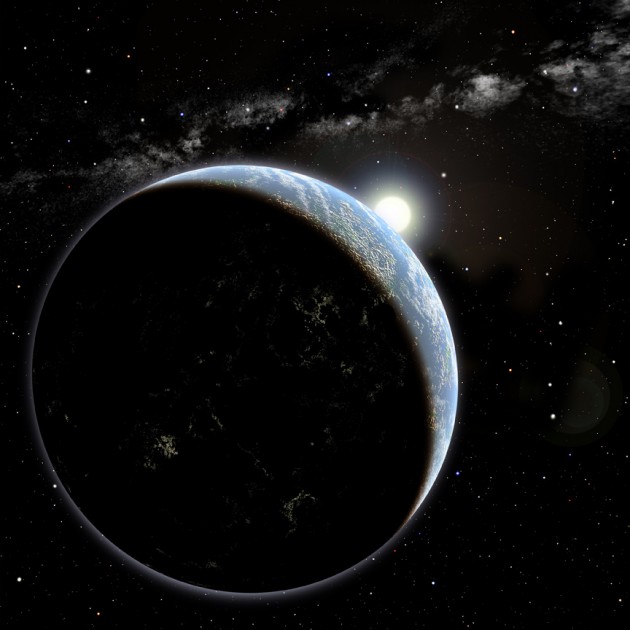 Artist’s conception of a hypothetical exoplanet orbiting a yellow, Sun-like star. Astronomers have measured the ages of 22 Sun-like stars using their spins, in a method called gyrochronology. Before now, only two Sun-like stars had measured spins and ages. (Image by David A. Aguilar, CfA)

“We have found stars with properties that are close enough to those of the Sun that we can call them ‘solar twins,'” says lead author Jose Dias do Nascimento of the Harvard-Smithsonian Center for Astrophysics (CfA). “With solar twins we can study the past, present, and future of stars like our Sun. Consequently, we can predict how planetary systems like our solar system will be affected by the evolution of their central stars.”

To measure a star’s spin, astronomers look for changes in its brightness caused by dark spots known as starspots crossing the star’s surface. By watching how long it takes for a spot to rotate into view, across the star and out of view again, we learn how fast the star is spinning.

The change in a star’s brightness due to starspots is very small, typically a few percent or less. NASA’s Kepler spacecraft excels at such exacting brightness measurements. Using Kepler, do Nascimento and his colleagues found that the Sun-like stars in their study spin once every 21 days on average, compared to the 25-day rotation period of our Sun at its equator. 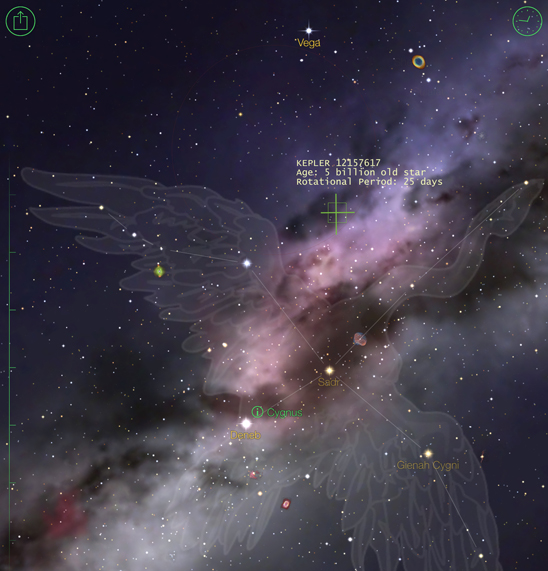 Finder chart for one of the most Sun-like stars examined in this study. KIC 12157617 is located in the constellation Cygnus, about halfway between the bright stars Vega and Deneb (two members of the Summer Triangle). An 8-inch or larger telescope is advised for trying to spot this 12th-magnitude star. (CfA image created using StarWalkHD and MAST and the Virtual Observatory)

Younger stars spin faster than older ones because stars slow down as they age, much like humans. As a result, a star’s rotation can be used like a clock to derive its age. Since most of the stars the team studied spin slightly faster than our sun, they tend to be younger too.

This work expands on previous research done by CfA astronomer (and co-author on the new study) Soren Meibom. Meibom and his collaborators measured the rotation rates for stars in a 1-billion-year-old cluster called NGC 6811. Since the stars had a known age, astronomers could use them to calibrate the gyrochronology “clock.” The new research led by do Nascimento examines free-floating “field” stars that are not members of a cluster.

Since stars and planets form together at the same time, by learning a star’s age we learn the age of its planets. And since it takes time for life to develop and evolve, knowing the ages of planet-hosting stars could help narrow down the best targets to search for signs of alien life. Although none of the 22 stars in the new study are known to have planets, this work represents an important step in the hunt for Sun-like stars that could host Earth-like planets.

The paper was accepted for publication in The Astrophysical Journal Letters.