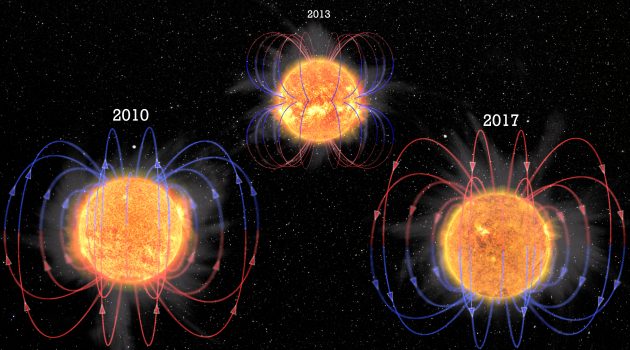 Using new numerical simulations and observations, scientists may now be able to explain why the Sun’s magnetic field reverses every eleven years.

Using new numerical simulations and observations, scientists may now be able to explain why the Sun’s magnetic field reverses every eleven years. This significant discovery explains how the duration of the magnetic cycle of a star depends on its rotation, and may help us understand violent space weather around the Sun and similar stars.

During what is known as the solar cycle, the magnetic field of the Sun has reversed every 11 years over the past centuries. This flip, where the south magnetic pole switches to north and vice versa, occurs during the peak of each solar cycle and originates from a process called a “dynamo”. Magnetic fields are generated by a dynamo, which involves the rotation of the star as well as convection and the rising and falling of hot gas in the star’s interior.

For the Sun, scientists know that magnetic fields originate in its turbulent outer layers and have a complex dependency upon how quickly the Sun is rotating. Scientists have also measured magnetic cycles for distant stars with fundamental properties similar to those of the Sun. By studying the characteristics of these magnetic properties, scientists have a very promising way to better understand the magnetic evolution in our Sun associated with the dynamo process.

An international collaboration that includes the University of Montréal, the Harvard-Smithsonian Center for Astrophysics, the Commissariat à l’énergie atomique et aux énergies alternatives and the Universidade Federal do Rio Grande do Norte, carried out a set of 3D simulations of the interiors of stars similar to the Sun to explain the origin of their magnetic field cycles. The scientists found that the period of the magnetic cycle depends on the rotation rate of a star. The trend is that more slowly rotating stars have a magnetic cycle that repeats more quickly.

“The trend we found differs from theories developed in the past. This really opens new research avenues for our understanding of the magnetism of stars,” said Antoine Strugarek of the Commissariat à l’énergie atomique et aux énergies alternatives, France, the lead author of a paper published in the July 14th issue of Science Magazine.

An important advance is that the scientists’ model can explain the cycle of both the Sun and stars that astronomers categorize as Sun-like. Previously scientists thought that the Sun’s cycle might differ in behavior from those of Sun-like stars, with a shorter magnetic cycle than expected.

“Our work supports the idea that our Sun is an average, middle-aged yellow dwarf star, with a magnetic cycle compatible with cycles from its stellar cousins,” said co-author Jose-Dias Do Nascimento of the Harvard-Smithsonian Center for Astrophysics (CfA) and the University of Rio G. do Norte (UFRN), Brazil. “In other words we confirm that the Sun really is a useful proxy for understanding other stars in many ways.”

By observing more and more stars and exploring stellar structures different from those of the Sun with numerical simulations, the team of researchers hopes to refine their new scenario for the origin of stellar magnetic cycles.

One long-term goal of this work is to gain a better understanding of “space weather”, a term used to describe the wind of particles that blows away from the Sun and other stars. The acceleration mechanism for this wind is likely related to magnetic fields in the atmospheres of stars. In extreme cases, space weather can interrupt electrical power on Earth, and it can be very dangerous to satellites and astronauts.

“The changes throughout a magnetic cycle have effects throughout the Solar System and other planetary systems thanks to the influence of space weather,” said Do Nascimento.