Based on a treasure trove of recent discoveries, astronomers now know that planets are remarkably plentiful in our galaxy and may be common throughout the Universe. Though planets appear to form readily, the actual process of planet formation remains a mystery and astronomers are searching for the missing pieces to this cosmic puzzle. 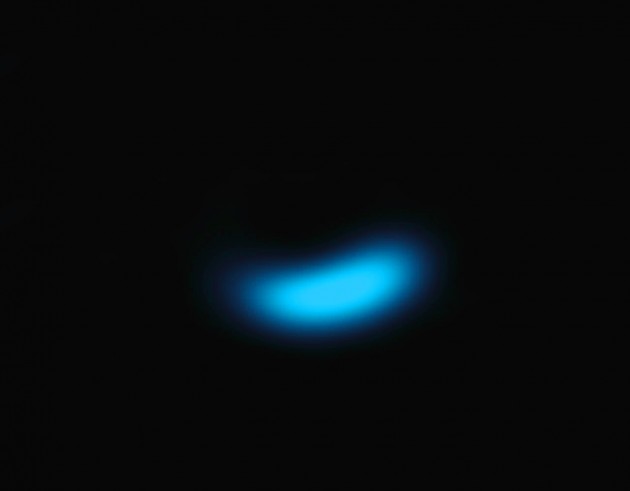 ALMA image of the dust trap around Oph IRS 48. The distinctive crescent-shaped feature comes from the accumulation of larger dust grains in the outer regions of the disk. This provides the safe haven dust grains need to grow into larger and larger objects. (Credit: ALMA (ESO/NAOJ/NRAO) Nienke van der Marel)

An international team of researchers using the new Atacama Large Millimeter/submillimeter Array (ALMA) telescope has discovered an intriguing clue that could help explain how rocky planets are able to evolve out of a swirling disk of dust and gas.

By imaging the outer regions of a young solar system known as Oph IRS 48, which resides approximately 390 light-years from Earth in the constellation Ophiuchus, astronomers have discovered a crescent-shaped structure known as a “dust trap.” The researchers speculate that this newly discovered feature is actually a protective cocoon where the critical early steps of planet, asteroid, and comet formation can take place. 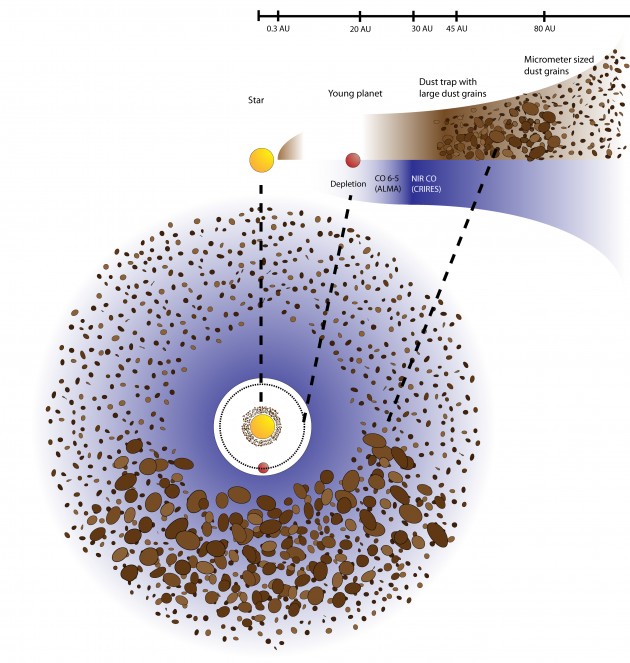 An artist’s impression of the proposed disk structure of Oph IRS 48. The brown spots represent the large and small grains. The larger grains detected by ALMA are concentrated in the dust trap at the bottom of the image. The blue represents the distribution of carbon monoxide gas. The gap in the disk is shown with the proposed planetary body that is sweeping the area clear and providing the conditions necessary to form the dust trap.(Credit:
Nienke van der Marel)

When astronomers try to model the evolution of dust grains into pre-planetary bodies, such as pebbles and boulders, they run into a problem. Once dust grains grow to a certain size, they tend to self-destruct, either by colliding with other grains or by being drawn into their central star. To get past this vexing size limit, astronomers have theorized that swirling eddies in the disk could create dust traps, regions that enable dust particles to cling together, eventually setting the stage for the formation of larger and larger objects.

“There is a major hurdle in the long chain of events that leads from tiny dust grains to planet-sized objects,” said Til Birnstiel, a researcher at the Harvard-Smithsonian Center for Astrophysics in Cambridge, Mass., and co-author on the paper published in the journal Science. “In computer models of planet formation, dust grains must grow from submicron sizes to objects up to ten times the mass of the Earth in just a few million years. But once particles grow larger enough, they begin to pick up speed and either collide, sending them back to square one, or slowly drift inward, thwarting further growth.”

To save dust grains from this fate, astronomers have proposed that a vortex, essentially a “bump” in the disk, would produce an area of higher pressure and protect the growing dust grains.

Creating the dust trap, however, requires the helping hand of a very large object, such as a gas-giant planet or companion star. As this secondary object plows through the disk, it would clear a path around the star and produce the essential eddies and vortices in its wake.

Previous studies of Oph IRS 48 revealed a very uniform ring of carbon monoxide gas and small dust grains around the star, with no hints of a theorized dust trap. They did, however, detect a large gap between the inner and outer portions of the disk, which is a likely telltale sign that a very massive planet, on the order of 10 Jupiter masses, or a companion star was present. Such an object could produce the necessary conditions for a dust trap.

Using ALMA, the researchers were able to simultaneously observe both the gas and the much larger dust grains, revealing something the other telescopes could not: a lopsided bulge in the outer portion of the disk.

“At first the shape of the dust in the images was a complete surprise for us,” said Nienke van der Marel, a Ph.D. student at Leiden Observatory in the Netherlands and lead author on the paper. “Instead of the ring we had expected to see, we found a very clear cashew-nut shape. We had to convince ourselves that this feature was real, but the strong signal and sharpness of the ALMA observations left no doubt about the structure.”

Though the ALMA observations revealed only the outer structure of the disk, at more than 50 times the distance of the Earth to the Sun, the principle would still be the same closer to the star where rocky planets would form. “This structure we see with ALMA could be scaled down to represent what may be happening in the inner solar system where more Earth-like rocky planets would form,” said Birnstiel. “In the case of these observations, however, we may be seeing something analogous to the formation of our Sun’s Kuiper Belt or Oort Cloud, the region of our solar system where comets are believed to originate.”

These observations were made with only a portion of ALMA’s eventual full complement of 66 antennas. When the full array is in operation later this year, ALMA will have one of the sharpest visions of any astronomical observatory and will be an important tool in understanding the entire planet-formation process.