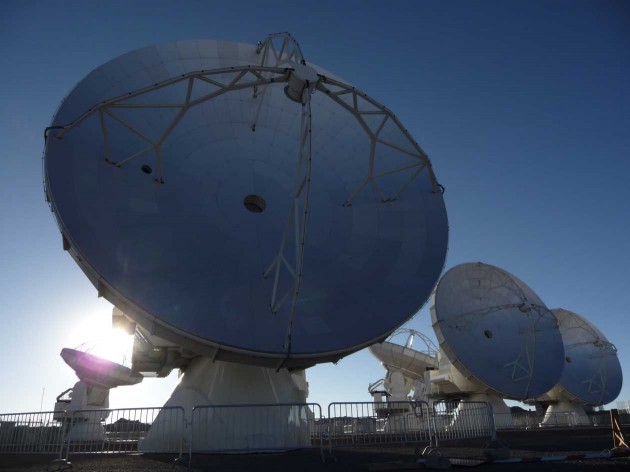 View from the center of the Atacama Large Millimeter/ submillimeter Array at an elevation of 16,500 feet on the Chajnantor Plain in northern Chile. Each of these radio telescopes has a dish spanning nearly 40 feet across. (Photo by Tania Burchell)

Thousands of scientists from around the world competed to be the first few researchers to explore some of the darkest, coldest, farthest, and most hidden secrets of the cosmos with this new astronomical tool. One of the projects chosen for ALMA Early Science observations was that of David Wilner of the Harvard-Smithsonian Center for Astrophysics (CfA).

“My team hunts for the building blocks of solar systems, and ALMA is uniquely equipped to spot them,”Wilner said.

His team’s target is AU Microscopii, a star 33 light-years away that is only about 50 million years old. “We will use ALMA to image the ‘birth ring’ of planetesimals that we believe orbits this young star. Only with ALMA can we hope to discover clumps in these dusty asteroid belts, which can be the markers of unseen planets,” said Wilner.

Wilner and his team will share their data with a European team who also requested ALMA observations of this nearby, dust-ringed star.

For the start of Early Science, around one third of ALMA’s eventual 66 radio telescopes will make up the growing array. Even while still under construction, ALMA has become the best telescope of its kind — a fact that was apparently well known to the astronomers who requested to observe with it.

Considering the limited number of hours allocated to this first phase of science, ALMA could only take about a hundred projects. “We were stunned when we received over nine hundred requests from all over the world!” said Lewis Ball, ALMA Deputy Director and ALMA Chief of Staff at the National Radio Astronomy Observatory (NRAO). “No other telescope on ground or in space has ever had this magnitude of over-demand.” The successful projects were chosen based on their scientific value, their regional diversity, and also their relevance to ALMA’s major science goals.

During its Early Science observations, ALMA will continue its construction phase in the Chilean Andes, high on the remote Chajnantor Plain in the harsh Atacama Desert. By 2013, ALMA will be an up to 11-mile-wide array of 66 ultra-precision millimeter/submillimeter wave radio telescopes working together as one and built by ALMA’s multinational partners in North America, East Asia, and Europe.