The Submillimeter Array: Celebrating a decade of discovery

Ten years ago, eight antennas on the summit of Mauna Kea, Hawai’i, united to form a telescope unlike any other. Since then the Submillimeter Array (SMA) has examined the universe in unprecedented detail and provided new insights into subjects as diverse as planetary formation and distant galaxies. Its achievements were celebrated earlier this month at a conference in Cambridge, Mass.

A joint project of the Smithsonian Astrophysical Observatory (SAO) and the Academia Sinica Institute of Astronomy and Astrophysics (ASIAA), the SMA opened a new window onto the cosmos by observing radiation from some of the coldest, dustiest, and most distant objects in the universe. It explores the universe by detecting light at wavelengths (or colors) that are not visible to the human eye. 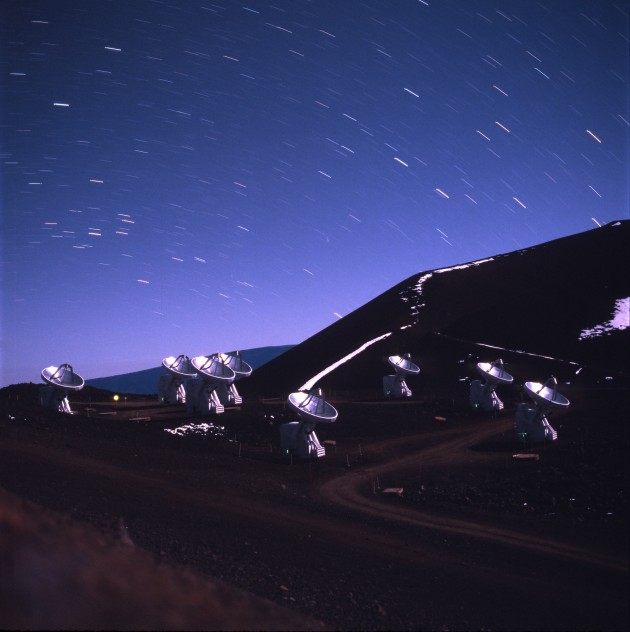 The SMA receives millimeter and submillimeter radiation, so named because the wavelength ranges from 0.3 to 1.7 millimeters, or 0.01 to 0.07 inches. It combines signals from eight 6-meter-diameter movable antennas to achieve very high resolution, comparable to the best ground-based optical telescopes.

The SMA was built because of the vision of then-SAO director Irwin Shapiro, who felt that the time was ripe to explore the universe at submillimeter wavelengths at high resolution.

Former SMA director Jim Moran notes, “I’m amazed to realize that the most notable accomplishments of the SMA were not envisioned by its proponents. For example, in 1983 we hadn’t seen any exoplanets or protoplanetary disks. Yet the SMA has had a major impact on studying gaps in protoplanetary disks, which are thought to be cleared by planets.”

From the start, the SMA made fundamental contributions to astronomy. In 2005, it monitored the Deep Impact mission, which sent a projectile to impact Comet Tempel 1. The impact produced more dust and less water vapor than expected.

Moving outward from our solar system, the SMA pierced the thick clouds where stars are born to learn more about the formation process. It revealed the key roles played by magnetic fields and turbulence in shaping star formation. It also unveiled how small cosmic seeds grow into big stars.

The SMA excels at exposing otherwise hidden galaxies in the distant, young universe. It peered across 12 billion light-years of space to uncover the brightest galaxies of their time, and a galaxy forming stars at a surprisingly furious rate. It has even teamed with other observatories to study a black hole and measure its “point of no return.” And, it served as a pathfinder for the Atacama Large Millimeter/submillimeter Array (ALMA), which is currently under construction in Chile.