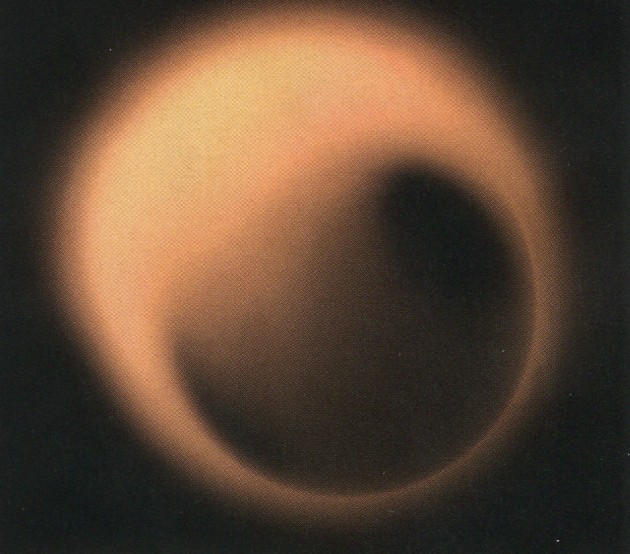 This simulation shows what the Milky Way’s central black hole may look like to the Event Horizon Telescope. Powerful gravitational forces bend light around the black hole, leaving a silhouette against a glowing background. Credit: A. Loeb & A. Broderick (CfA)

How do you see the invisible? That’s the puzzle faced by astronomers wanting to study black holes. A black hole gets its name for good reason – its strong gravity is so extreme that nothing can escape it, not even light. But with the right technology and some clever techniques, the invisible will be revealed before the decade is out.

Smithsonian astronomers have joined their colleagues from other observatories in a daring new venture: to photograph the giant black hole at the heart of our Milky Way galaxy. Their bold effort will require nothing less than an Earth-sized telescope, which has been named the Event Horizon Telescope or EHT. (The event horizon is a black hole’s boundary or outer edge – the point of no return.)

“For the first time, we intend to take a picture of a black hole, or more precisely its shadow,” says Jonathan Weintroub of the Smithsonian Astrophysical Observatory (SAO). SAO is a key part of the international collaboration working to create the EHT.

They’ve targeted the Milky Way’s central black hole because it covers the largest apparent area of the sky. Physically, it spans about 7 million miles (12 million km). That may sound large, but it’s located 26,000 light-years from Earth, or 150,000 trillion miles. It appears the size of a poppy seed in Los Angeles as seen from Boston. As a result, observers will need extremely high resolution to tease out any details.

Another challenge is that the galactic center is cloaked in gas and dust and crowded with stars. Almost no visible light from this region makes it to Earth. Radio waves can penetrate the gloom, so the Event Horizon Telescope will focus on the radio spectrum. These radio waves are naturally occurring, coming from both hot gas and free-flying electrons surrounding the black hole.

The black hole feeds on gas and dust swirling around it like water draining from a bathtub. As that material spirals inward, friction heats it and causes it to shine. The black hole is silhouetted against that glowing background.

The black hole’s gravity also bends light passing nearby – an effect known as gravitational lensing. As a result, theorists calculate that the Event Horizon Telescope will show a bright, circular outline with the black hole’s shadow at the center.

To get this iconic photo, a worldwide network of radio telescopes must link together in a technique called “interferometry.” In essence, interferometry provides the same resolution (although not the same light-gathering power) as a single telescope thousands of miles across. The Smithsonian’s Submillimeter Array, located atop Mauna Kea in Hawaii, will join this network.

“The Submillimeter Array will be a vitally important component of the Event Horizon Telescope,” Weintroub says. “Its location, collecting area and sensitivity all will contribute to the success of this effort.”

He emphasizes that the project will be a gradual process as more facilities link together. Initially, researchers will measure only the most basic information about the black hole – its size. As they gather more data, glowing “hot spots” may emerge from the black hole’s swirling accretion disk. Eventually, the full picture of the black hole’s environment will be unveiled.

“We are poised to catch a wave as ALMA comes online,” Weintroub says. “Once its capabilities are added to this project, we expect to get some amazing results. By the end of the decade, we should have the first-ever close-up photo of a black hole.”–By Christine Pulliam