W49A might be one of the best-kept secrets in our galaxy. This star-forming region shines 100 times brighter than the Orion nebula, but is so obscured by dust that very little visible or infrared light escapes.

The Smithsonian’s Submillimeter Array (SMA) has peered through the dusty fog to provide the first clear view of this stellar nursery. The SMA revealed an active site of star formation being fed by streamers of infalling gas. 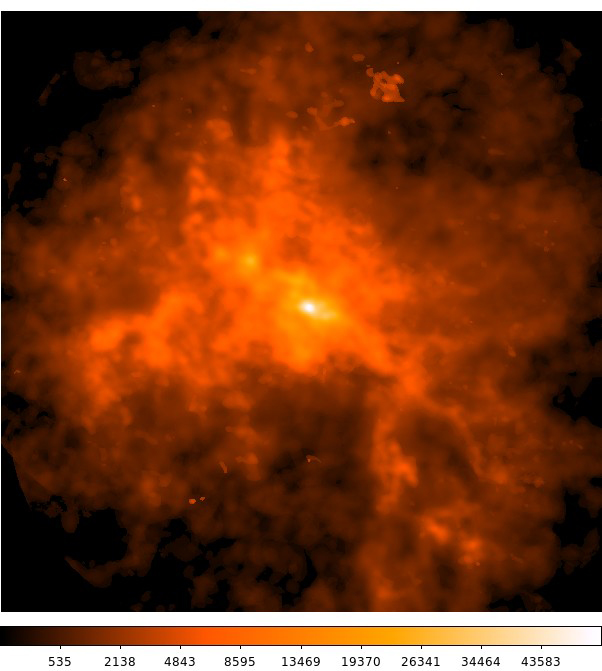 This image from the Smithsonian’s Submillimeter Array maps the projected density of molecular gas in the central 30 light years of W49A. Brighter colors mark denser regions. The brightest region at the image center is less than three light-years across, yet it contains about 50,000 suns’ worth of molecular gas. (Image by Roberto Galván-Madrid, ESO; Hauyu Baobab Liu, ASIAA, Taiwan; and Tzu-Cheng Peng, ESO.

“We were amazed by all the features we saw in the SMA images,” says lead author Roberto Galván-Madrid, who conducted this research at the Harvard-Smithsonian Center for Astrophysics (CfA) and the European Southern Observatory (ESO).

W49A is located about 36,000 light-years from Earth, on the opposite side of the Milky Way. It represents a nearby example of the sort of vigorous star formation seen in so-called “starburst” galaxies, where stars form 100 times faster than in our galaxy.

The heart of W49A holds a giant yet surprisingly compact star cluster. About 100,000 stars already exist within a space only 10 light-years on a side. In contrast, fewer than 10 stars lie within 10 light-years of our Sun. In a few million years, the giant star cluster in W49A will be almost as crowded as a globular cluster.

The SMA also revealed an intricate network of filaments feeding gas into the center, much like tributaries feed water into mighty rivers on Earth. The gaseous filaments in W49A form three big streamers, which funnel star-building material inward at speeds of about 4,500 miles per hour (2 km/sec).Media

“Move over, Mississippi!” quips co-author Qizhou Zhang of the CfA.

Being denser than average will help the W49A star cluster to survive. Most star clusters in the galactic disk dissolve rapidly, their stars migrating away from each other under the influence of gravitational tides. This is why none of the Sun’s sibling stars remain nearby. Since it is so compact, the cluster in W49A might remain intact for billions of years.

The Submillimeter Array mapped the molecular gas within W49A in exquisite detail. It showed that central 30 light-years of W49A is several hundred times denser than the average molecular cloud in the Milky Way. In total, the nebula contains about 1 million suns’ worth of gas, mostly molecular hydrogen.

“We suspect that the organized architecture seen in W49A is rather common in massive stellar cluster-formation,” adds co-author Hauyu Baobab Liu of the Academia Sinica Institute of Astronomy and Astrophysics (ASIAA) in Taiwan.

The team expects to continue analyzing the SMA data for some time to come.

“It’s a mine of information,” says Galván-Madrid.

Their research was published in the December 2013 Astrophysical Journal.

The Submillimeter Array: Celebrating a decade of discovery