The galaxy known as M87 has a fastball that would be the envy of any baseball pitcher. It has thrown an entire star cluster toward us at more than two million miles per hour. The newly discovered cluster, which astronomers named HVGC-1, is now on a fast journey to nowhere. Its fate: to drift through the void between the galaxies for all time.

“Astronomers have found runaway stars before, but this is the first time we’ve found a runaway star cluster,” says Nelson Caldwell of the Harvard-Smithsonian Center for Astrophysics. Caldwell is lead author on the study, which will be published in The Astrophysical Journal Letters and is available online. 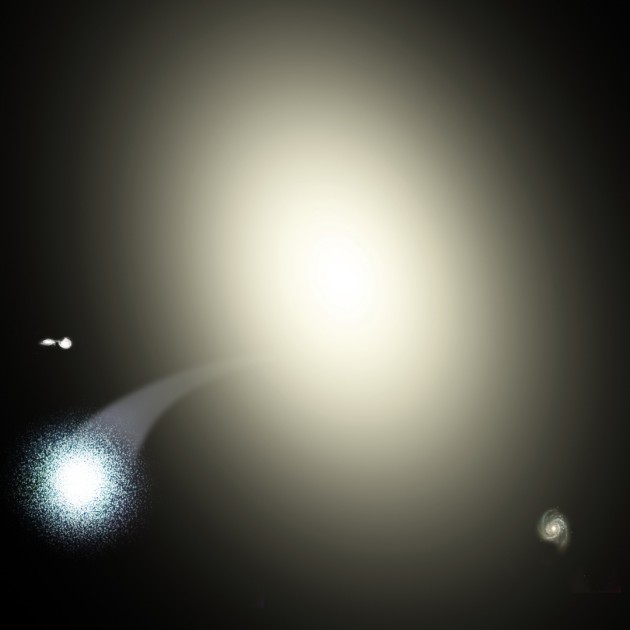 This artist’s illustration shows the hypervelocity star cluster HVGC-1 escaping from the supergiant elliptical galaxy M87. HVGC-1 is the first runaway star cluster discovered by astronomers. It is fated to drift through intergalactic space. (Image by David A. Aguilar)

The “HVGC” in HVGC-1 stands for hypervelocity globular cluster. Globular clusters are relics of the early universe. These groupings usually contain thousands of stars crammed into a ball a few dozen light-years across. The Milky Way galaxy is home to about 150 globular clusters. The giant elliptical galaxy M87, in contrast, holds thousands.

It took a stroke of luck to find HVGC-1. The discovery team has spent years studying the space around M87. They first sorted targets by color to separate stars and galaxies from globular clusters. Then they used the Hectospec instrument on the MMT Telescope in Arizona to examine hundreds of globular clusters in detail.

A computer automatically analyzed the data and calculated the speed of every cluster. Any oddities were examined by hand. Most of those turned out to be glitches, but HVGC-1 was different. Its surprisingly high velocity was real. 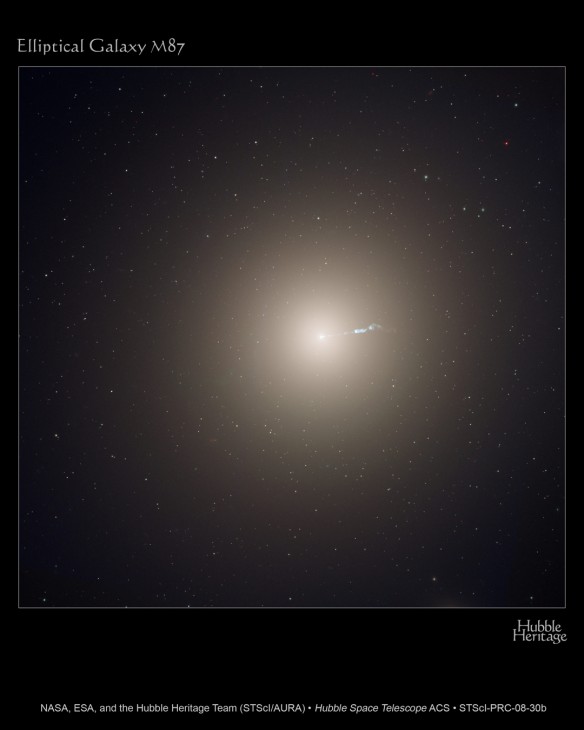 The monstrous elliptical galaxy M87 is the home of several trillion stars, a supermassive black hole, and a family of 15,000 globular star clusters. One of those globular clusters, HVGC-1, is escaping the galaxy after being flung outward at tremendous speed.

“We didn’t expect to find anything moving that fast,” says Jay Strader of Michigan State University, a co-author on the study.

How did HVGC-1 get ejected at such a high speed? Astronomers aren’t sure but say that one scenario depends on M87 having a pair of supermassive black holes at its core. The star cluster wandered too close to those black holes. Many of its outer stars were plucked off, but the dense core of the cluster remained intact. The two black holes then acted like a slingshot, flinging the cluster away at tremendous speed.

HVGC-1 is moving so fast that it is doomed to escape M87 altogether. In fact, it may have already left the galaxy and be sailing out into intergalactic space.

M87, source of the hypervelocity cluster HVGC-1, is a king among galaxies. This supergiant elliptical galaxy weighs as much as 6 trillion Suns, making it one of the most massive galaxies in the nearby universe.

The discovery of HVGC-1 suggests that the core of M87 holds not one but two supermassive black holes. This must be the result of a long-ago collision between two galaxies, which merged to form a single giant galaxy. The same fate awaits our own Milky Way, which will collide with the Andromeda galaxy in a few billion years to create an elliptical galaxy that astronomers have dubbed Milkomeda.