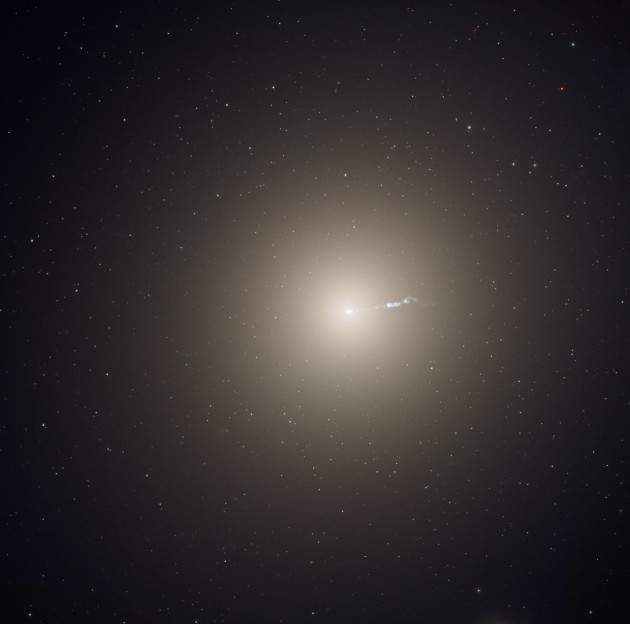 The monstrous elliptical galaxy M87, located 53 million light-years from Earth is the dominant galaxy at the center of the neighboring Virgo cluster of galaxies. Astronomers have measured the “heartbeats” of stars within M87 and used that data to determine the galaxy’s age in a new way. This photograph was taken with the Hubble Space Telescope’s Advanced Camera for Surveys instrument. (Image by NASA, ESA, and the Hubble Heritage Team)

In many ways stars are like living beings. They’re born; they live; they die. And they even have a heartbeat. Using a novel technique, astronomers have detected thousands of stellar “pulses” in the galaxy Messier 87 (M87). Their measurements offer a new way of determining a galaxy’s age.

We tend to think of stars as stable and unchanging. However, late in life stars like the Sun undergo a significant transformation. They become very bright and swell up to an enormous size, swallowing any planets that are within Earth’s distance from the Sun. Near the end of their lifetime they begin to pulsate, increasing and decreasing their brightness by a large amount every few hundred days. In our own Milky Way galaxy many stars are known to be in this stage of life.

“We realized that these stars are so bright and their pulsations so strong, that they are difficult to hide,” said Charlie Conroy, an assistant professor at Harvard University and astronomer at the Harvard-Smithsonian Center for Astrophysics (CfA), who led the research. “We decided to see if the pulsations of these stars could be detected even if we couldn’t separate their light from the sea of unchanging stars that are their neighbors.”

The astronomers studied the elliptical galaxy M87, located 53 million light-years from Earth in the constellation Virgo. They examined a unique series of images taken with the Hubble Space Telescope over the course of three months in 2006. They quickly found what they were looking for.

“Amazingly, one in four pixels in the image changes with time,” said Pieter van Dokkum, a professor and chair of the astronomy department at Yale University. “We tend to think of galaxies as steady beacons in the sky, but they are actually ‘shimmering’ due to all the giant, pulsating stars in them.”

Analysis of the Hubble data showed that the average pixel varies on a timescale of approximately 270 days. The regular up and down changes in brightness are reminiscent of a heartbeat. “It’s as if we’re taking the pulse of the galaxy,” said Conroy.

Their discovery offers a new way of measuring the age of a galaxy, because the strength and speed of a galaxy’s heartbeat varies depending on its age. The team finds that M87 is about 10 billion years old, a number that agrees with previous estimates using different techniques.

The discovery of stellar heartbeats should not be specific to M87; every galaxy in the universe likely shows similar distinctive patterns. The next step is to take the pulse of other galaxies.

“Our models suggest that the pulsations will be stronger in younger galaxies, and that’s something we’d love to test,” said Jieun Choi, a graduate student at Harvard and a co-author of the study.

The galaxies will keep beating for a while longer. Said van Dokkum, “Cardiac arrest is not expected until a trillion years from now – that’s a hundred times longer than the age of the universe.”