How do astronomers weigh stars that are trillions of miles away and far too large  to fit on a bathroom scale? In most cases they cannot, although computer models of stellar structure  can give a very good estimate. 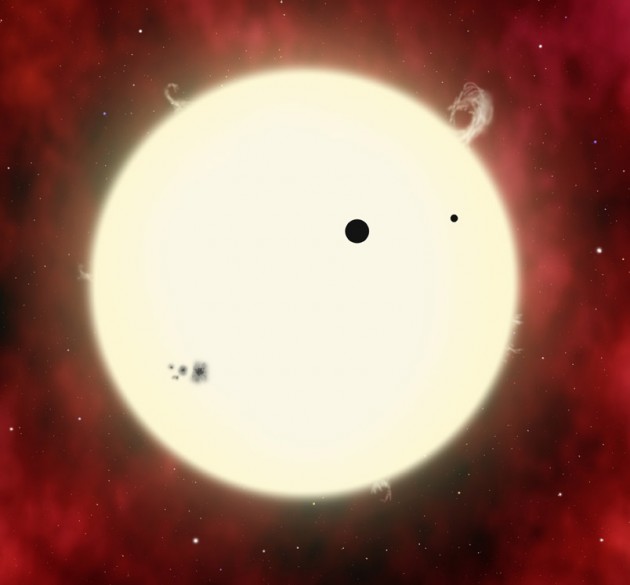 This artist’s conception shows a star with a transiting planet and its moon.

Now, new research by astrophysicist David Kipping has revealed that in some special cases, a star can be weighed directly. Such a star must have a planet orbiting it with a moon orbiting the planet. In addition, both planet and moon must cross in front of their star, causing it to dim, when viewed from telescopes. Then we can measure the sizes and orbits of the planet and its moon to determine the mass of the star, Kipping explains.

“I often get asked how astronomers weigh stars. We’ve just added a new technique to our toolbox for that purpose,” says Kipping, a predoctoral fellow at the Harvard-Smithsonian Center for Astrophysics in Cambridge, Mass.

Astronomers have found more than 90 planets that cross in front of, or transit, their stars. By measuring the amount of starlight that is blocked by an orbiting planet, astronomers can now calculate how big the planet is relative to the star. But they can’t know exactly how big the planet is unless they know the actual size of the star. Computer models can give a good estimate but in science, real measurements are best.

Kipping realized that if a transiting planet has a moon big enough for us to see (by also blocking starlight), then the planet-moon-star system can be measured in a way that allows scientists to calculate exactly how large and massive all three bodies are.

“Basically, we measure the orbits of the planet around the star and the moon around the planet,” Kipping explains. ” Then through Kepler’s Laws of Motion, it is possible to calculate the mass of the star.” 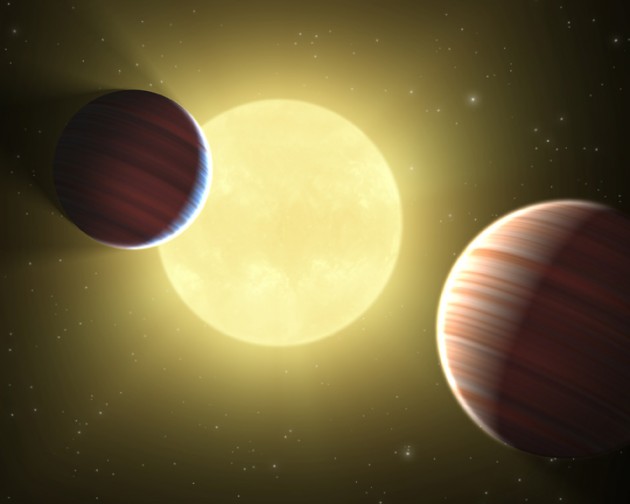 This artist’s concept shows two Saturn-sized planets discovered recently by NASA’s Kepler mission. The star system is oriented edge-on, as seen by Kepler, such that both planets cross in front of, or transit, their star. When Kepler discovers a planet with a moon that both transits a star, astronomers will be able to calculate the mass of the star. (Image by David A. Aguilar)

Plugging those numbers into Kepler’s Third Law yields the density of the star and planet. Since density is mass divided by volume, the relative densities and relative sizes gives the relative masses. Finally, scientists measure the star’s wobble due to the planet’s gravitational tug, known as the radial velocity. Combining the measured velocity with the relative masses, they can calculate the mass of the star directly.

“If there was no moon, this whole exercise would be impossible,” Kipping says. “No moon means we can’t work out the density of the planet, so the whole thing grinds to a halt.”

Kipping has yet to put his method into practice, since no star is known to have both a planet and moon that transit. However, NASA’s Kepler spacecraft should discover several such systems in coming years.

“When they are found, we will be ready to weigh them,” Kipping says.

Kipping’s research was published recently in the Monthly Notices of the Royal Astronomical Society.