How do planets form? This most basic question of astrophysics continues to stump astronomers. They know that gas and dust clump together over thousands or millions of years, but  details beyond that have been tough to pin down. Partly, that’s because even the closest young solar systems are far away and difficult to study in detail.

New observations by the Smithsonian’s Submillimeter Array, a radio telescope atop Mauna Kea in Hawaii, are shedding light on planet formation. The array provides sharp views by combining eight antennas into the equivalent of a single, large telescope. It can resolve details as small as a dime seen from seven miles away. 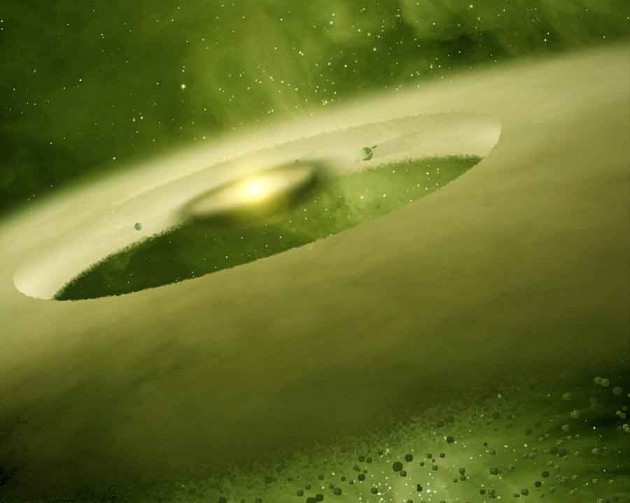 Image: This artist’s conception shows a young solar system with a distinctive disk of dust and gas. The central area of the disk has been cleared by the gravity of one or more planets. (Artwork by Tim Pyle)

Astronomers at the Smithsonian Astrophysical Observatory recently used the array to examine nine stars located about 400 light-years away in the direction of the constellation Ophiuchus. (A light-year is the distance light travels in one year, or 6 trillion miles.)

The stars are all young, less than 10 million years old, and weigh anywhere from one-half to twice as much as our Sun. The nine targets were chosen because they have disks of gas and dust—the building blocks for planets.

“We deliberately picked the brightest and most massive disks to look at,” says Smithsonian astrophysicist David Wilner. 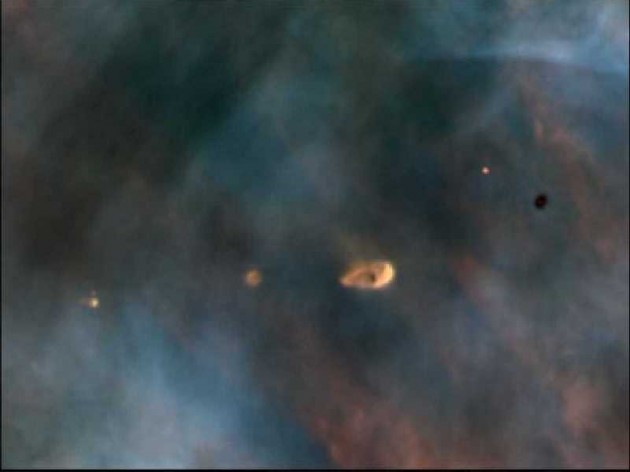 Photo: This Hubble Space Telescope photo of a small portion of the Orion Nebula reveals five young stars. Four are surrounded by gas and dust trapped as the stars formed, but which were left in orbit about the star. These protoplanetary disks may evolve on to agglomerate planets. (Image courtesy NASA)

“We wanted to see how dust is distributed in these disks,“ explains lead scientist Sean Andrews. “Knowing that, we can calculate how the disks will evolve over time, and even how likely it is that they will form planets.”

To their surprise, the team found several cases where planets may have already formed. Three of the disks had holes at their centers, extending outward for nearly four billion miles (the equivalent of Neptune’s orbit around the Sun). The gaps may have been cleared out by the gravity of a large, Jupiter-sized world.

Of the nine disks, the three with holes seem to be the oldest, which means they’ve had the longest time to form planets. The other disks may give birth to new worlds in a few million years’ time.

“These are cosmic baby photos. We’re seeing the early stages in the development of new planetary systems,” Andrews says. 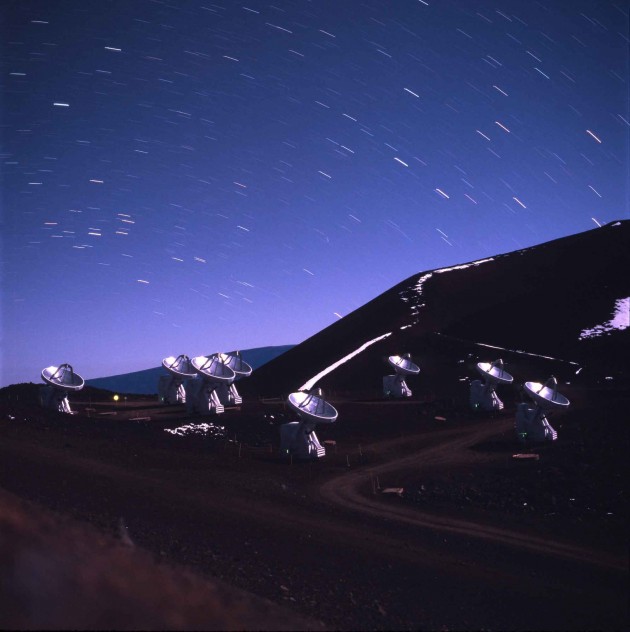 Ultimately, astronomers hope that studies like this will give them new insights into how our solar system was born, and what kinds of planetary systems we can expect to find around distant stars.

“I have little doubt that someday, planet searches will reveal planets like the Earth. When they do, it will be left to work like this to tell us why they are there, and why we are here,” Wilner says.

Planets can form in the galactic center