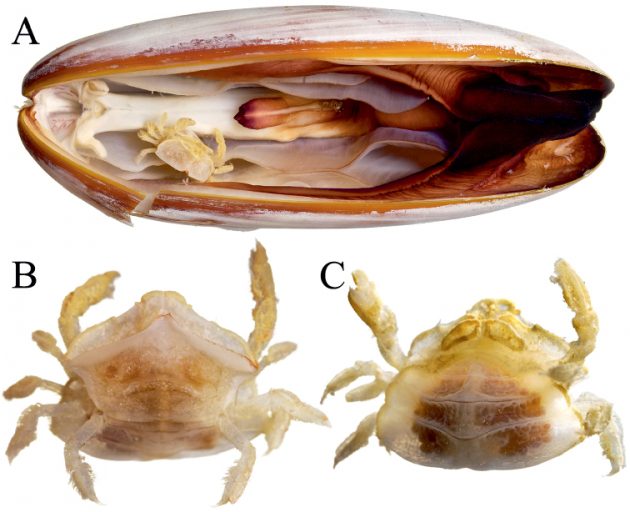 Shown in its true colors “Serenotheres janus” residing in the host date mussel “Leiosolenus obesus,” along with magnified images of the crab as seen from top (B) and bottom. (Photos courtesy Zachariah Kobrinsky and David Liittschwager)

A one-cubic-foot approach to studying biodiversity as showcased in the new Biocube exhibit at the Smithsonian’s National Museum of Natural History has led to the discovery and naming of a new species of pea crab in the Solomon Islands. Serenotheres janus was recently discovered by students and Smithsonian scientists during a Biocube collaboration, a project in which 12-inch cube frames are placed in diverse habitats around the globe and all of the animal and plant species that are inside or pass through the cubes are documented.

During a 2014 Solomon Islands expedition, students placed a biocube on a portion of the reef off of Njari Island that contained a large chunk of dead coral. “The students extracted the cube, brought it back to the boat and took it apart,” explains Chris Meyer, Natural History Museum mollusk expert and a principal researcher with Biocubes.

Inside they found a live boring date mussel (Leiosolenus obesus), a mollusk shaped like a bullet that bores deep into the hard coral material for protection. Prying open the mussel, Meyer discovered a tiny cream-colored parasitic pea crab living inside. 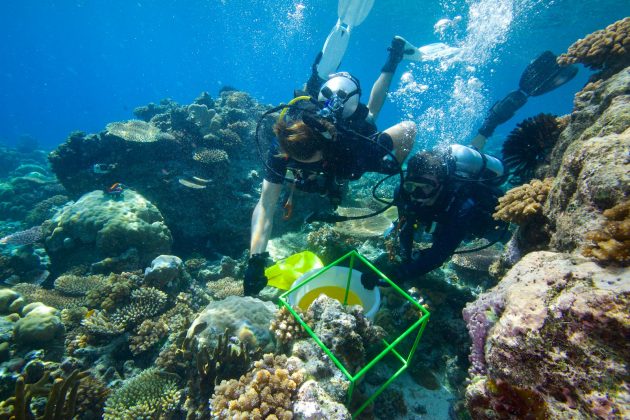 Biocube researchers in the Solomon Islands collect material inside a cube that was placed earlier on the sea floor. Back at their laboratory the material is examined to determine how many different species of plants and animals it contains. (Photograph by David Liittschwager)

“When that pea crab popped out I knew instantly it was something pretty cool and unique,” Meyer recalls. “I wrote immediately to Peter Ng, a crab expert at the National University of Singapore, who is a great colleague and expert in this group of crabs.”

The female pea crab was an unknown species of the family Pinnotheridae. Ng and Meyer have just published a paper in ZooKeys describing and naming it S. janus after “the ancient two-faced Roman god,” because of its appearance when viewed from the top.

Once embedded deep in a coral, a date mussel remains tightly wedged there for life, never to fully open its shell. It breathes, takes in nutrients and excretes through two siphon holes that stick out into the water like snorkels. The female pea crab spends life imprisoned inside the bivalve’s dark interior. “When they are small they find a host, nestle in and just grow and sustain themselves inside,” Meyer says.

Giving up both freedom and light for safety and a reliable food source, the crab’s ultimate goal is successful reproduction. “That’s the quirkiness of natural selection,” Meyer observes. “If the strategy works to assure progeny and future generations’ success, then it gets selected for. Imagine all the other internal parasites in the world. It’s all about successful babies.” 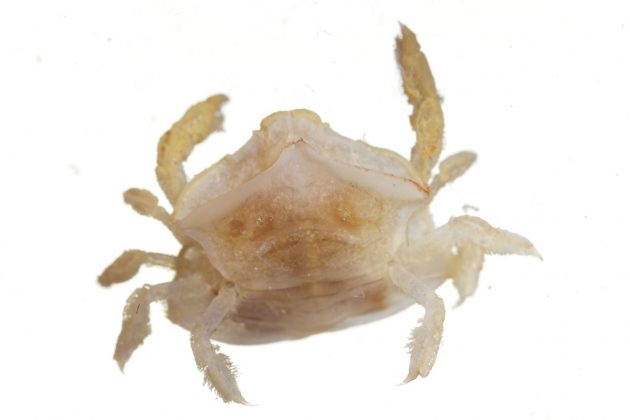 Top view of the newly discovered “S. janus” crab. The crab is similar in size to a pencil eraser. (Photo by Zachariah Kobrinsky and David Liittshwager)

Janus crabs likely use their tiny claws to pick off and eat the strings of food filtered out of the water by the mussel’s gills. Pea crab species are known to associate with mussels, scallops and other bivalves, but only one other date mussel-associated pea crab, the Malaysian species S. besutensis, has been described. “It is usually a parasitic relationship. The crabs poach food from the host, and the bivalves’ growth is stunted,” Meyer explains.

No one knows about the males and how or if they are able to get inside a mussel to mate with a female crab. They are likely much smaller than the females. In other pea crabs, females can store sperm for long periods of time, and they probably release the baby crabs into the water through the mussel’s exhalant siphon.

“Once we found this amazing female, we looked and looked for a male throughout our biocube sample, but never found one,” Meyer adds. “A crab like this is such a rare thing to come across; we just don’t know enough about it yet to make any blanket statements about its life history or behavior.”

This video shot on the French Polynesian Island of Moorea in the South Pacific, captures the collecting, classifying and collaboration behind the Biocube exhibit of the Smithsonian’s National Museum of Natural History . (Video Courtesy Ross Field Academy)

The DNA barcode from the new species was distributed to crab scientists worldwide. “By having that sequence available, you get a sense of its uniqueness. Instantly, people doing crab phylogenetics targeted this specimen. Because it was such an outlier, we’ve worked up more genome-wide sequences to see where S. janus fits within the broader decapod tree of life. Its DNA can reveal a lot about the evolution of this unique genus, and also about this unusual obligate symbiont group, the Pinnotherids.”

While this particular species is understandably hard to come by as an adult, Meyer adds, “now that we have its genetic license plate, we can detect its larvae in routine environmental sampling. Genomic observatories, like toll booths, regularly sample marine habitats and use DNA barcodes as an organism’s ‘license plate’ to monitor ecosystem health. Digitizing our planet’s diversity so it can be inventoried across all these different habitats is a major part of the research that I have been doing, and is consistent with the National History Museum’s Global Genome Initiative and Barcode of Life programs.”

Courtney Sale Ross sponsored the expedition to the Solomon Islands as part of the Ross Field Academy.