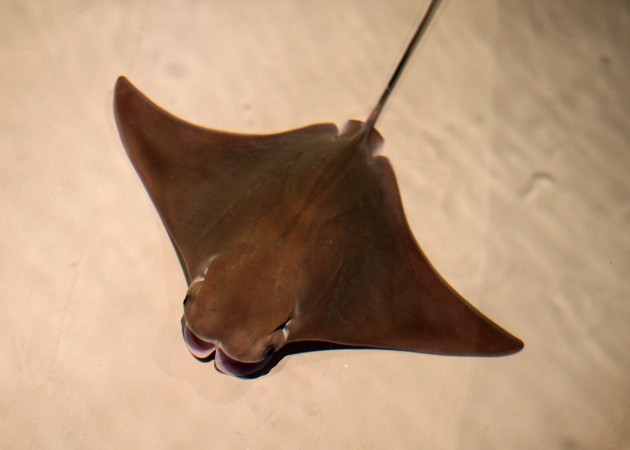 Ten years ago, cownose rays in the Atlantic got a bad rap when this species (Rhinoptera bonasus) was accused of excessively eating up scallops in North Carolina and oysters in the Chesapeake Bay. At the time both shellfish populations were crashing and rays became the scapegoat. A perceived spike in ray numbers was reportedly due to a decline in sharks, which eat rays along the Atlantic Coast.

An ensuing campaign to “Save the Bay, Eat a Ray” encouraged ray fishing tournaments, as well as creative efforts to entice the public to add cownose ray to their diets. 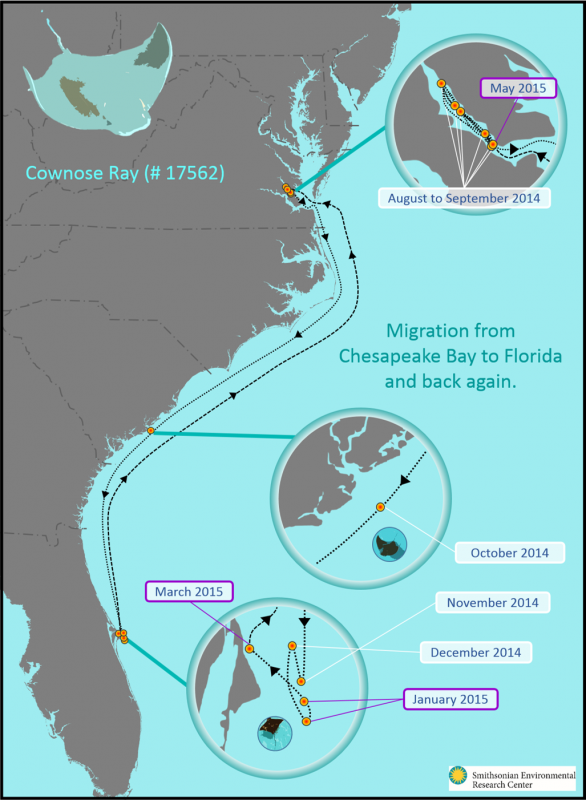 SERC researchers tagged Cownose Ray #17562 in Chesapeake Bay during the summer of 2014. They tracked its winter migration to Florida and return this summer to the same location in Chesapeake Bay. (SERC)

Now, new research has cleared these gentle fish of those charges, and scientists are re-evaluating the facts.

“One of the major findings of the study is that a low reproductive rate makes it mathematically impossible for the cownose ray population to have exploded as quickly as it supposedly did,” says Matt Ogburn, a ray expert and researcher at the Smithsonian Environmental Research Center.

Female rays give birth to just one pup per year, and it takes a ray seven years to mature. At that rate, the population can’t grow by very many rays each year, and it becomes mathematically impossible to have a sudden explosion in the cow nose ray population. Not only that, but such a slow rate of reproduction means cow nose rays are vulnerable to overfishing, because once their numbers are reduced, they don’t bounce back quickly. 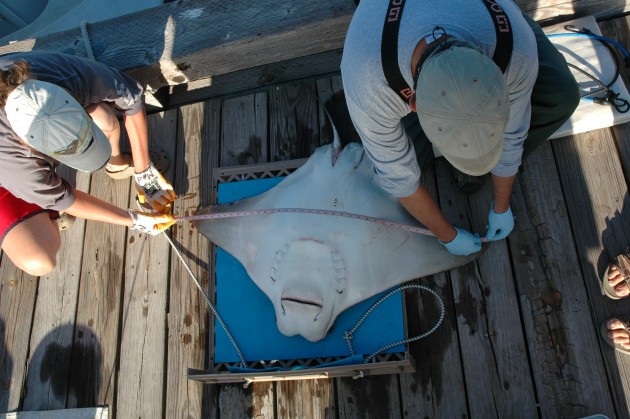 Measurements are taken of a cownose ray before it receives an implant radio transmitter at the Smithsonian Environmental Research Center on the Chesapeake Bay. (SERC photo)

It’s also not clear what impact, if any, cownose rays have on the oyster population, although they do eat oysters. Rays in fact eat mainly clams and small crustaceans, not oysters. According to Ogburn, scientists know very little about the ecology of cownose rays. In an effort to change that, he and his colleagues at SERC have been tracking the ray’s annual migration.

Together with researchers from the Virginia Institute of Marine Sciences, Ogburn’s team implanted signal emitting tags in 50 cownose rays caught in the Chesapeake Bay. Every two minutes, the tags make seven clicks encoding a number unique to each ray. When a ray is in range of a receiver, about half a mile, the receiver logs that it heard that ray’s number. Several hundred receivers are set up along the East Coast to track the rays as they migrate south to Florida for the winter, then back north in early summer.

“We want to know if we have separate subpopulations of rays in each of the major tributaries of the Bay,” Ogburn says. “Or, if just one large Chesapeake Bay population wanders the Bay during the summer. It may be that one big population wanders up and down the Atlantic coast, sometimes hanging out in North Carolina, and sometimes in Delaware Bay or in the Chesapeake.” 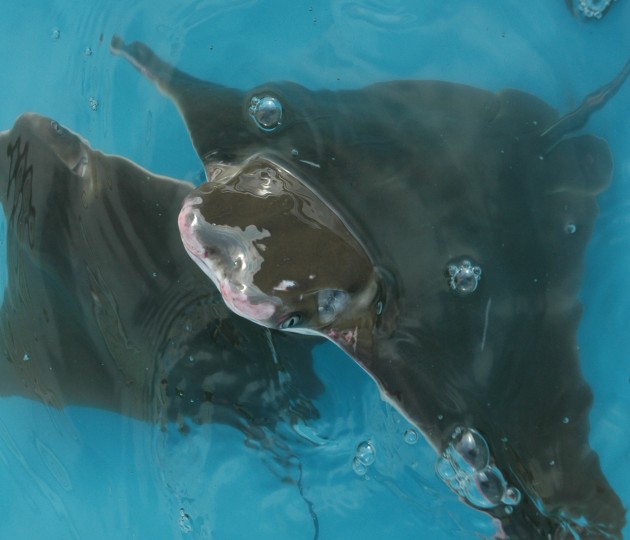 A cownose ray pops out of a kiddie pool where it was kept briefly while awaiting an implant radio transmitter. (SERC)

The outcome of Ogburn’s tracking study will be important for managing cownose ray numbers. For instance, heavy fishing in a given area could have a detrimental impact if it turns out there are distinct sub-populations. On the other hand, if there’s just one Bay-wide or coastal population, trying to manage a ray problem in one river or tributary may require a large-scale approach.

Until researchers like Ogburn can pin down more information on ray ecology, no one can recommend a particular management strategy. What they can say is that slow reproduction and growth rates mean that if the ray population is depleted, it will take a long time to recover.