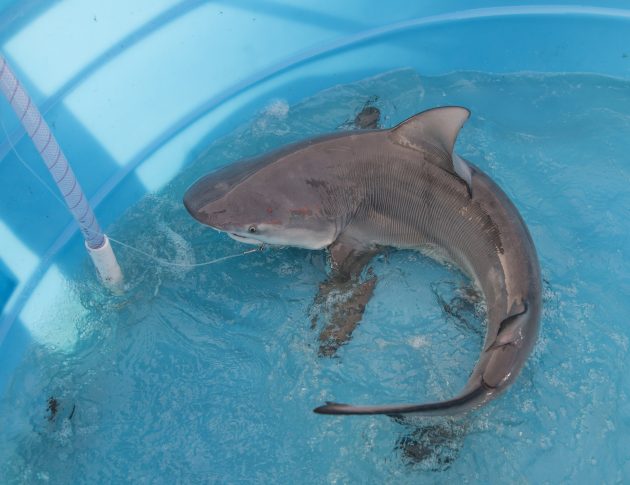 A shark rests in a holding tank on a Florida expedition. Before and after having their tags inserted, the sharks are kept in small pools for comfort and recovery. (Photo by Jay Fleming)

When many people think of the Chesapeake Bay, one of the first creatures that comes to mind is the iconic blue crab. But parts of the bay are also home to several species of shark.

Scientists at the Smithsonian Environmental Research Center (SERC) in Edgewater, Maryland, are hoping to change that with their Movement of Life Initiative.

Chuck Bangley, a postdoctoral fellow at SERC and Movement of Life team member, answered questions about SERC’s work with sharks.

Q: With the “Jaws” series and newly released movie “The Meg,” is it safe to go in the water? What shark species do you study, and are they dangerous?

Bangley: Our lab is part of a Smithsonian project called the Movement of Life Initiative, which seeks to understand the patterns and drivers of animal movement to better allow us to coexist with them. At SERC we work to understand the migration, habitat selection and predator-prey interactions of five species of sharks: bull, blacktip, dusky, spinner and smooth dogfish. We’ve also been tracking cownose rays in the Chesapeake Bay and beyond for several years.

Each of these species represents a different ecological role, with bull and dusky sharks functioning as large top-predators; blacktip and spinner sharks as highly migratory mid-sized fish predators, and smooth dogfish and cownose rays as smaller predators of bottom-dwelling crustaceans and other invertebrates. 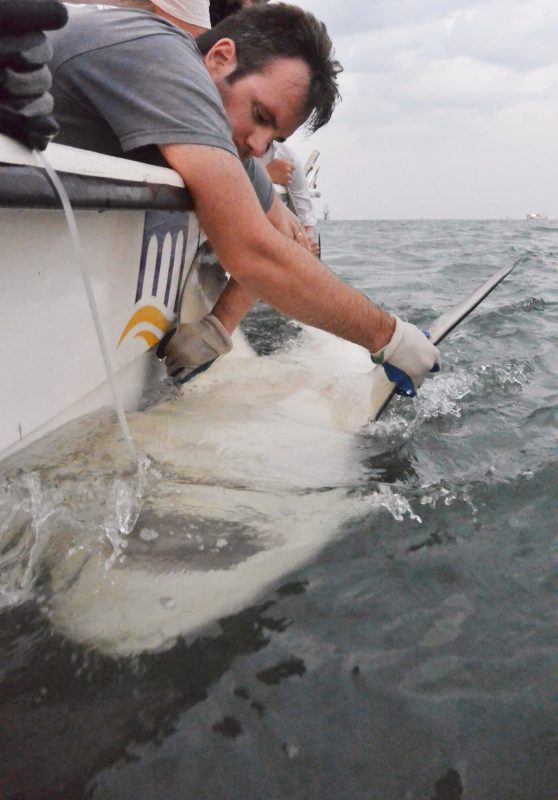 SERC postdoc Chuck Bangley pulls in a bull shark for tagging in Back Sound, North Carolina. (Photo by Cecilia Krahforst)

Of all these species, only the bull shark is considered among the most dangerous; bites on humans from them are rare. Some of these species, like the blacktip and spinner sharks, spend a lot of time in the surf zone where they can potentially interact with humans but generally just cruise by without being noticed. These are very effective predators, and if they were actively hunting us, bites would be a lot more common.

Q: What things are you trying to find out about these sharks?

Bangley: Even among some of the more well-known sharks, many aspects of their basic biology and behavior are still unknown or poorly understood. Our main goals are to identify the migratory pathways for our target species of sharks and rays, determine what environmental conditions are related to them migrating or staying resident, and try to use that information to predict the location and extent of important habitat areas for these animals.

For some of our species there’s already some information available on movement and habitat preferences, but for others, including relatively familiar species like the bull shark, there really isn’t much known at all.

Q: How are you tracking these sharks?

Bangley: We primarily use acoustic telemetry to track the sharks and rays. This works by surgically implanting an acoustic transmitter, which then transmits an ultrasonic signal that carries a unique ID number for that shark.

These signals are picked up by acoustic receivers deployed up and down the North American east coast. The date, time and ID number of the tag detection are recorded, and can then be downloaded. 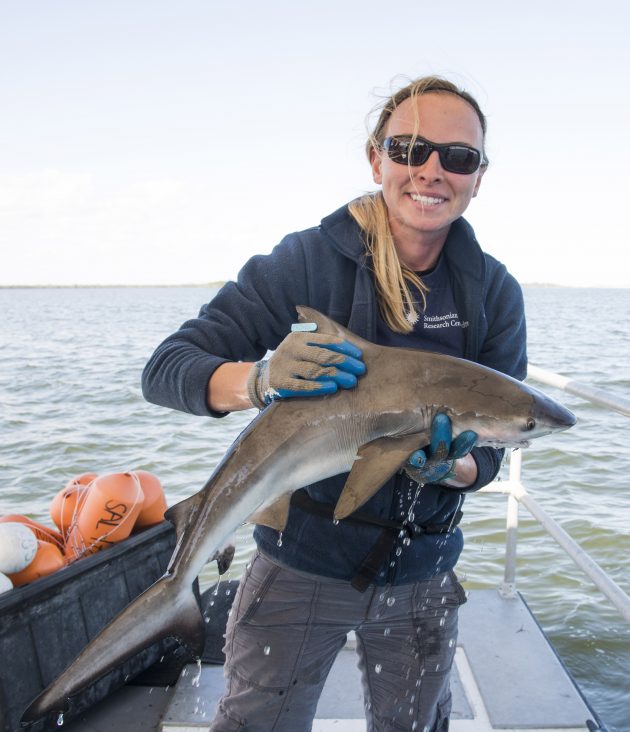 We’re part of a few coast-wide networks of researchers using acoustic telemetry, and when one of us picks up another researcher’s tag, we’re able to look that tag number up in a database and make sure they get the data. Through this method we’re able to “connect the dots” between the locations of receivers that picked up our tags and piece together the migratory route from there.

We’re also in the process of integrating Smart Position or Temperature (SPOT) tags into our research. These tags are attached to the dorsal fin of larger sharks and when the fin breaks the surface of the water a signal is sent to the Argos satellite network and we’re sent data on the position of the animal. This method requires large sharks that visit the surface or shallow water often, so we’re still working on making use of this tagging method.

Q: Why is having all of this new information important?

Bangley: Overfishing, fishery bycatch (the unintentional capture of species not targeted by the fishery) and habitat loss are all important issues for shark conservation. Knowing where important shark habitats are and when they’ll be there is tremendously helpful for putting in place conservation measures like closed areas, fishing seasons, and limits on coastal and offshore development.

Even species that migrate across entire oceans have certain areas where they give birth, grow up or regularly feed that might be disproportionately important to their survival. By identifying specific areas, we can protect the most important habitats, benefitting the sharks while helping them coexist with human uses of coastal and marine environments. 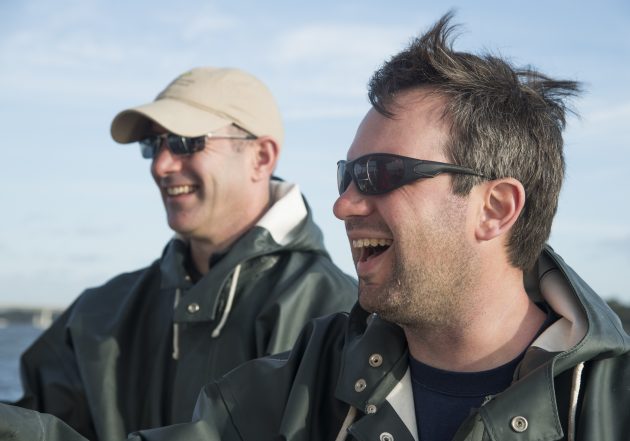 Q: Have there been any surprises in what you’re learning?

Bangley: Every shark or ray we tag has the potential to take off somewhere we don’t expect, and we’re learning a lot about how complex some of their movements can be.

Through our tagging efforts, we’ve identified different subgroups of the same species with different migratory behaviors, such as bull sharks and cownose rays that migrate seasonally on some parts of the coast but stay put year-round in others.

We’ve also seen some of our tagged sharks and rays spend more time than expected in human-altered habitats such as offshore wind farm sites, and have even seen some of our animals migrate through the totally human-made Intracoastal Waterway.

Q: How long will this project take, and what’s next?

Bangley: The initial tagging effort will wrap up within the next year or so, but the tags we’re putting out on most of the sharks have a six-year battery life so we’ll continue to gather data from them for some time. As some of the tagged sharks and rays grow and mature we may see changes in their movement patterns. I’m looking forward to seeing what else they can teach us.