Whale sharks (Rhincodon typus) are often thought to be solitary behemoths that live and feed in the open ocean. Scientists at the Smithsonian Institution and colleagues, however, have found that this is not necessarily the case, finding that whale sharks can be gregarious and amass in the hundreds to feed in coastal waters.

Aggregations, or schools, of whale sharks have been witnessed in the past, ranging from several individual sharks to a few dozen. However this new research, which involved both surface and aerial surveys, has revealed an enormous aggregation of whale sharks—the largest ever reported—with up to 420 individuals off the coast of the Yucatán Peninsula in Mexico. What brings them together is food. 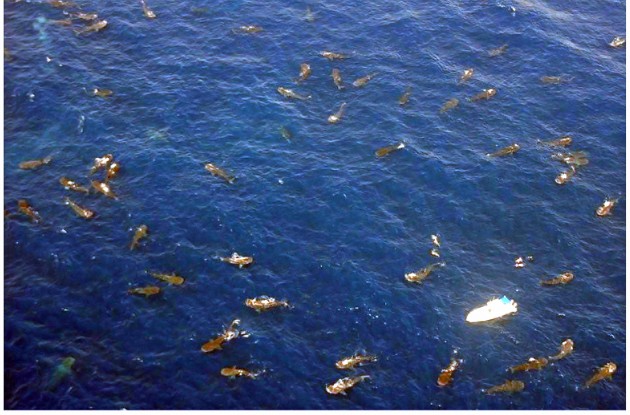 “Whale sharks are the largest species of fish in the world, yet they mostly feed on the smallest organisms in the ocean, such as zooplankton,” said Mike Maslanka, biologist at the Smithsonian Conservation Biology Institute and head of the Department of Nutrition Sciences. “Our research revealed that in this case, the hundreds of whale sharks had gathered to feed on dense patches of fish eggs.”

While whale sharks may seem conspicuous as the heaviest and longest of all fishes, growing more than 40 feet long, there is still much that is unknown about them. They have a very widespread distribution, occurring in all tropical and sub-tropical regions of the ocean around the world. Understanding this filter-feeder’s diet is especially important since food sources determine much of the whale shark’s movement and location.

During the dozens of surface trips that team members made to the aggregation, called the “Afuera” aggregation, they used fine nets to collect food samples inside and immediately outside the school of feeding whale sharks. Scientists then used DNA barcoding analysis to examine the collected fish eggs and determine the species. They found that the eggs were from little tunny (Euthynnus alletteratus), a member of the mackerel family.

“Having DNA barcoding is an incredibly valuable resource for this research,” said Lee Weigt, head of the Laboratories of Analytical Biology at the Smithsonian’s National Museum of Natural History. “It not only allowed us to know what exactly this huge aggregation of whale sharks were feeding on, not readily done from only physical observations of eggs, but it also revealed a previously unknown spawning ground for little tunny.”

The team of scientists also examined a nearby, less dense aggregation of whale sharks, known as the Cabo Catoche aggregation, off the northern tip of the Yucatán Peninsula. They found that the prey of this group mostly consisted of copepods (small crustaceans) and shrimp. Increased sightings at Afuera coincided with decreased sightings at Cabo Catoche, and both groups had the same sex ratio, implying that the same animals were involved in both aggregations. 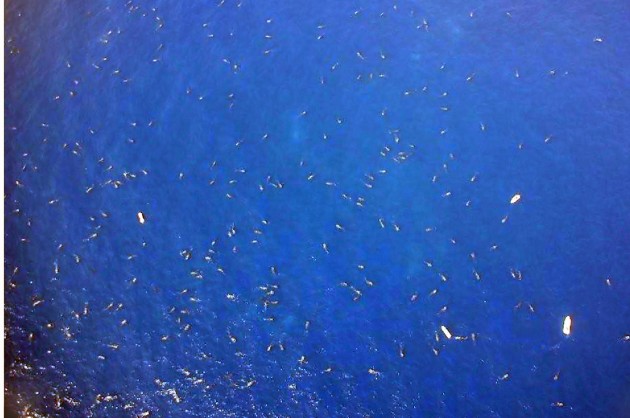 The whale shark is listed as “vulnerable” with the International Union for Conservation of Nature and Natural Resources. Populations appear to have been depleted by harpoon fisheries in Southeast Asia and perhaps incidental capture in other fisheries.

The scientists’ findings were published in the scientific journal PLoS ONE, April 2011. In addition to the Smithsonian Institution, team members were from the Comisión Nacional de Áreas Naturales Protegidas in Cancún, Mexico, the Center for Shark Research in Sarasota, Fl., project DOMINO and the Georgia Aquarium, Inc. in Atlanta, Ga.