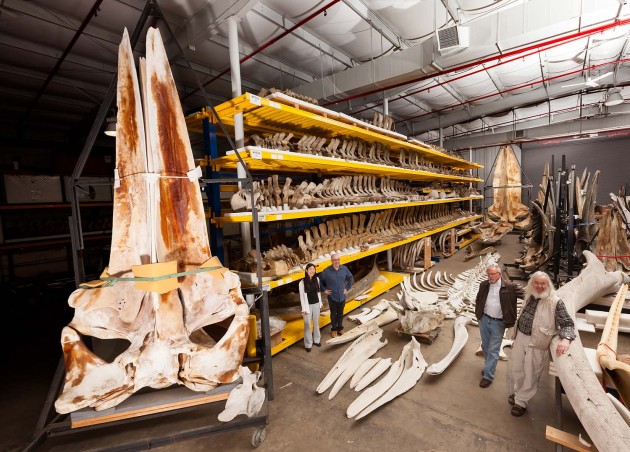 Laid out on the floor of the Marine Mammal Collection building at the Garber Facility in Suitland, Md., the recently acquired skeleton of a gray whale is a much welcome addition. The large skull at left is from a fin whale stranded at Cape Hatteras. Standing from left are Maya Yamato, Museum Specialist John Ososky, Charlie Potter and Marine Mammal Curator James Meade. (Photo by Don Hurlbert)

Rope, golf balls, sweat pants, bottles and aluminum cans are a few of the discarded items biologist Matt Klope says he has found inside the stomachs of the dead whales he has helped necropsy over the years in and around Puget Sound, Washington. A necropsy is a common procedure done to determine an animal’s cause of death and take blood, skin, blubber and organ samples.

“They all have plastic in their stomachs, every one of them,” Klope says of California gray whales in particular. “Gray whales are bottom feeders. They don’t feed in the mid-water column but take bites out of the ocean floor and then filter it. So anything that’s on the floor they eat, and that includes a lot of plastic.”

Despite this, gray whales have made a remarkable comeback in California, says Klope, a member of the Central Puget Sound Marine Mammal Stranding Network. “They were endangered years ago but today gray whales are plentiful. They are everywhere up and down the West Coast. We get many reports of dead ones.” So Klope was shocked, he says, when he learned the Smithsonian’s National Museum of Natural History in Washington, D.C., did not have a California gray whale skeleton in its research collection. 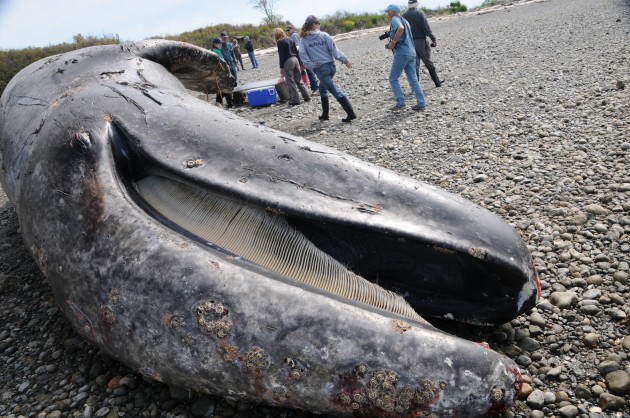 A team of volunteers prepares to salvage the skeleton of a gray whale on Whidbey Island in April 2012. (Photo by M.J. Adams)

“One of our goals for many, many years has been to acquire the complete skeleton of a California gray whale,” says Charles Potter, Collection Manager of the Natural History’s Marine Mammal collection. “The problem has always been, of course, getting a massive whale shipped here from the West Coast either unprepared, which would mean we’d have to freeze it, or as a clean skeleton.”

Klope, who is also manager of the Bird Strike Prevention Program for aircraft at the Whidbey Island Naval Air Station, has been shipping bird specimens to Carla Dove in the Natural History Museum’s Ornithology Department for many years. He was sensitive to the museum’s need for research specimens, no matter how large they may be. “I’ll take care of it,” he told Potter. 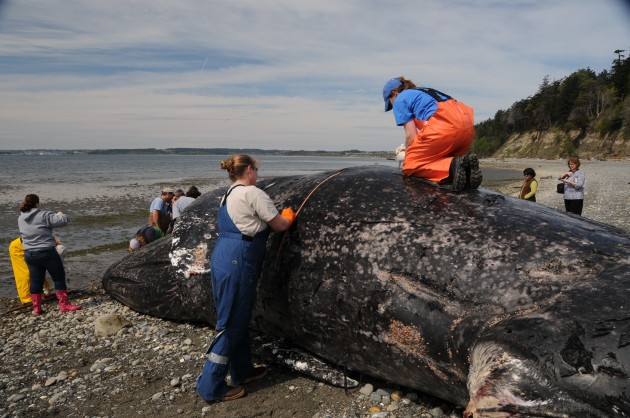 Volunteers make the first cut through the blubber of the whale. (Photo by M.J. Adams)

So when a 38-foot long 30-ton gray whale was spotted floating near Camano Island State Park, in Puget Sound, in April 2012, Klope and what he calls his “army of volunteers” were ready. First he arranged to have the whale towed ashore at Whidbey Island Naval Air Station. He also alerted Potter who flew out with Smithsonian Buck Post-Doctoral Fellow Maya Yamato to help dissect the whale and salvage its bones.

“It was a young adult male about 7 to 8 years old and 38 feet long,” Potter recalls. “We spent the better part of a week working up this whale and collecting its skeleton with an amazing group of volunteers from the Puget Sound Marine Mammal Stranding Network. We got a huge response from local volunteers. Every bit of that whale was taken off the beach by hand.” 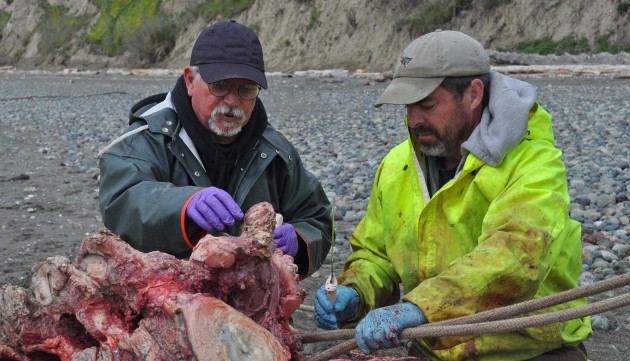 Charlie Potter, left, and Matt Klope examine the spinal column of a gray whale during the salvaging of its skeleton on Whidbey Island, Wash. (Photo by M.J. Adams)

Next the bones were lashed to plastic pallets and placed into open-top plastic drums then submerged back into the ocean at the Naval Air Station for a number of months. This allowed fish, crabs and other sea creatures to feast on the excess bits of meat and connective tissue still attached to the bones.

Later the bones were recovered, dried, and barnacles removed by hand.  Next, members of the Fleet Logistics Center Puget Sound Naval Air Station Whidbey Island volunteered on weekends to carefully wrap each bone in shipping paper and secure them in wooden shipping crates. 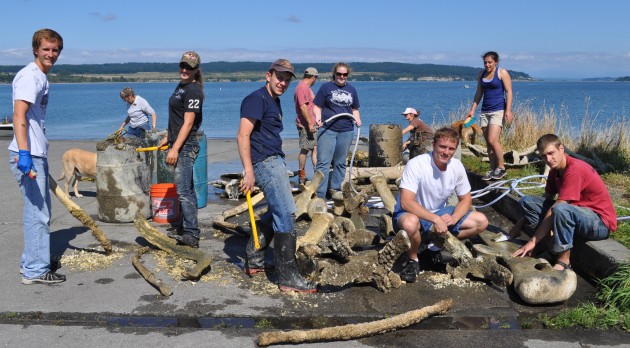 Volunteers clean barnacles from the gray whale’s bones after the bones had been submerged in the ocean for a number of months. (Photo by M.J. Adams)

Finally, Klope arranged for the free transport of the bones aboard a C-130 on a Military Training Logistics Flight from Whidbey Island to Andrews Air Force Base in Md., were staff from the Museum Support Center were able to pick them up and drive them to their new home in a museum collections building in Suitland, Md.

“I think Charley was a little afraid the bones were still going to be a little smelly and oozing when they got to him,” Klope says. “But they would never accept anything like that aboard a military flight, so the bones were well cleaned and shelf ready when he got them.”

What killed this particular gray whale is undetermined.

Examination of its skeleton back at the Smithsonian by Potter revealed the whale had a broken thoracic vertebra and two of its cervical vertebra were damaged. “It got a good whomp, probably from a ship strike or something,” Potter says. Bone tissue growth at the site of the breaks show the whale survived this injury however. 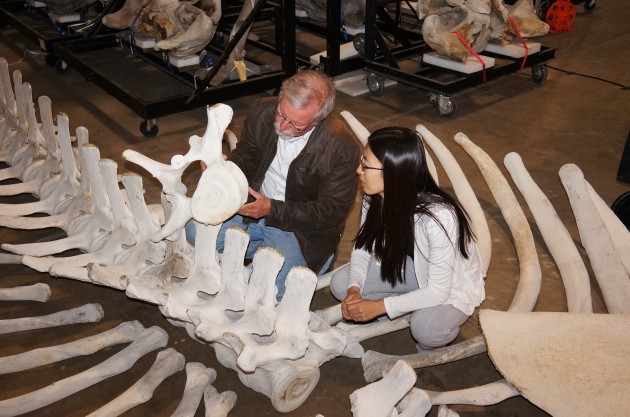 Klope believes the whale may have starved to death as it was thin. Its stomach contained shrimp and crab, sea grass and bark chips, bits of plastic, string, rope, fabric and other items.

“From the research side of things this is a really important acquisition and a major addition to our collection,” Potter says. “The Marine Mammal Stranding Network volunteers in Washington were amazing, as was the can-do attitude of the folks at the Naval Air Station. With their help we finally got this done after many years.”

In the meantime Klope is awaiting a call from his stranding network for sightings of other expired gray whales. His plans are to acquire a second skeleton for the Smithsonian. “What they’ve got is a young male,” he says. “They now need an adult female.” –by John Barrat