A fragment of whale rib found in a North Carolina strip mine is offering scientists a rare glimpse at the interactions between prehistoric sharks and whales some 3- to 4-million years ago during the Pliocene. 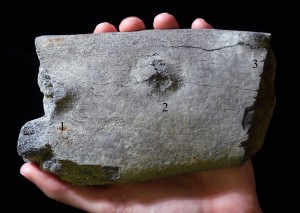 Three tooth marks on the rib indicate the whale was once severely bitten by a strong-jawed animal. Judging by the 6 centimeter (2.4 inch) spacing between tooth marks, scientists believe the attacker was a mega toothed shark Carcharocles megalodon, or perhaps another species of large shark which was alive at that time. The whale appears to have been an ancestor of a great blue or humpback.

“One certainly doesn’t expect to find evidence of animal behavior preserved in the fossil record, but this fossil shows just that, a failed predation,” explains Stephen Godfrey, paleontologist at the Calvert Marine Museum in Solomons, Md. and a Smithsonian research collaborator, who discovered the fossil. “The shark may have gone away with a mouthful, but it didn’t kill the whale” 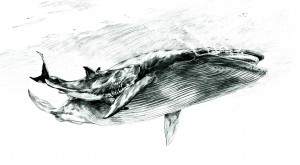 Image left: This illustration shows one plausible way, and the most likely, in which the three calluses preserved on the whale rib came about: a bite from one of the large Pliocene sharks with which these huge baleen whales had to contend. (Illustration by Timothy Scheirer © CMM; used with permission)

Scientists know the whale survived because “most of the fossil fragment is covered with a type of bone known as woven bone, which forms rapidly in response to localized infection,” explains Don Ortner, an anthropologist at the Smithsonian’s National Museum of Natural History and authority on the effect of disorders on skeletal tissue. “Biomechanically woven bone is not very strong. The body eventually remodels it into compact bone, but it takes time.” CT scans reveal evidence of inflammation in the bone marrow consistent with infection.

The presence of the woven bone indicates the healing was incomplete and the whale died, the scientists estimate, between two and 6 weeks after the attack. The whale’s death may have been unrelated to its infection and injury, Ortner says.  “We don’t know why it died.”

Based on the curvature of the shark’s jaw, as indicated by the arc of the impressions of its teeth, the scientists believe the shark was relatively small, between 4- and 8-meters (13-20 feet) long.

In the realm of paleontology, “only a handful of fossils show these kinds of interactions,” Godfrey explains. “There are lots of bite marks on fossils showing where the animal died and its carcass was scavenged. This fossil is one of a very few examples that shows a trauma clearly attributed to another animal, yet also shows the victim survived the event.”

“Bone Reactions on a Pliocene Cetacean Rib Indicate Short-Term Survival of Predation Event” was published in the International Journal of Osteoarchaeology and is co-authored by Robert Kallal and Stephen Godfrey of the Calvert Marine Museum in Solomons, Md., and Donald Ortner of the Smithsonian’s National Museum of Natural History.