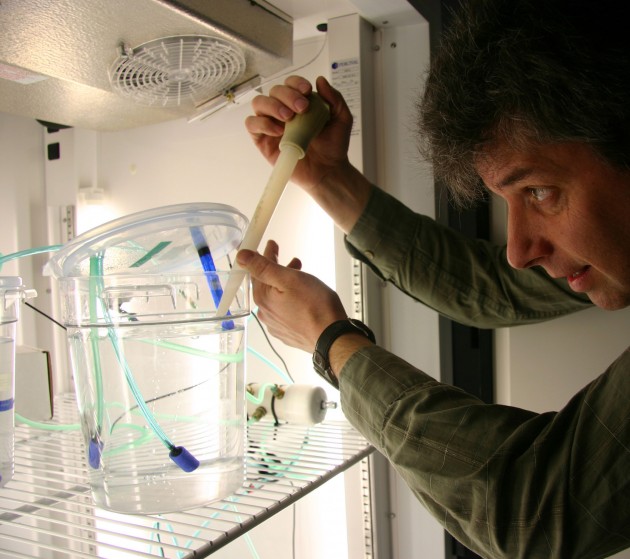 Photo: Whitman Miller collects oyster larvae from one of the experimental treatment cultures that he maintains in his laboratory at the Smithsonian Environmental Research Center in Edgewater, Md. (Photo by Kimbra Cutlip)

Already under siege from overfishing, disease and poor water quality, the oyster population in the Chesapeake Bay today stands at 2 percent of what it was in colonial times. Now, new data show that rising acidity in the Bay will have a negative impact on oyster shells. Laboratory experiments in which oyster larvae were raised in water containing high levels of acidity, levels that are predicted to occur during this century, show the oysters experienced a significant decrease in both shell growth and in the calcium content of their shells.

The experiments were led by Ecologist Whitman Miller of the Smithsonian Environmental Research Center on the Chesapeake Bay in Edgewater, Md.

Oysters serve as filters for the Bay, and their reefs provide habitat for juvenile crabs and fish. Yet  increased acidity caused by the ocean’s absorption of atmospheric carbon dioxide in coming years may have dire consequences, causing their shells to grow more slowly, grow not at all, or, in some cases, begin to dissolve.

“Estuarine and coastal ecosystems may be especially vulnerable to changes in water chemistry because their relative shallowness, reduced salinity and lower alkalinity makes them inherently less buffered to changes in pH than in the open ocean,” Miller says. 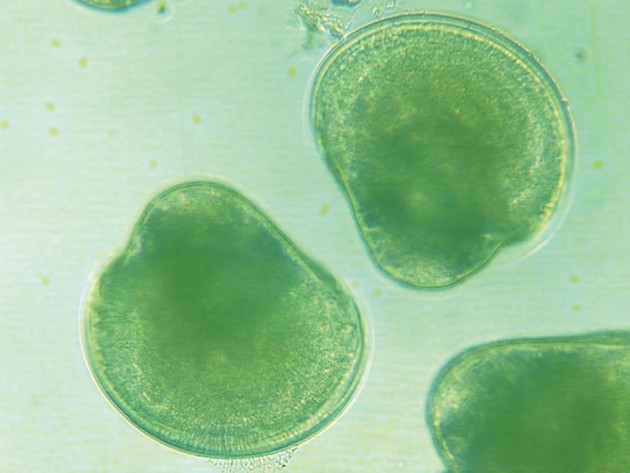 Photograph: Oyster larvae, shown here under a microscope only days after hatching, take on the shape of an adult oyster. Their shells are thin and translucent and they propel themselves through the water with cilia that protrude from the rims of their shells. (Photo by Amanda Reynolds)

For shellfish, the problem begins when CO2 dissolves in seawater and creates carbonic acid that is rapidly transformed into carbonate and bicarbonate ions in the water. Increased acidity caused by higher CO2 levels tips the balance toward bicarbonate formation and away from carbonate. Less carbonate in the water means the oysters have less material with which to build their shells.

In a laboratory filled with small three-liter aquaria, each inoculated with 15,000 microscopic oyster larvae, Miller feeds and cares for the oysters he studies as he monitors their response to varying levels of CO2 in their water. In the study, the larvae of Eastern oysters (Crassostrea virginica) and Asian Suminoe oysters (Crassostrea ariakensis) were cultured in estuarine water that was held at four separate CO2 concentrations, reflecting atmospheric conditions from the pre-industrial era, the present, and those predicted in the coming 50 and 100 years.

Miller and his team found that larvae living in water held at conditions predicted for the year 2100 experienced a 16 percent decrease in shell area and a 42 percent reduction in calcium when compared to larvae raised in water of a pre-industrial era quality. Surprisingly, Suminoe oysters from Asia showed no change to either growth or calcification.

In addition to the CO2 that bays and estuaries absorb from the atmosphere, nutrient runoff from land and carbon input from marshes and many other sources contribute to the problem.

In other areas of the oceans, “experts are already seeing a grim picture of what acidification can do to corals, mollusks, foraminifera and some plankton. In some cases, they’re seeing the dissolving of coral structures,” Miller says. “We know we will see a loss of biodiversity along with loss of critical habitats created by coral reefs, but what about in estuaries? Nobody’s looking.”