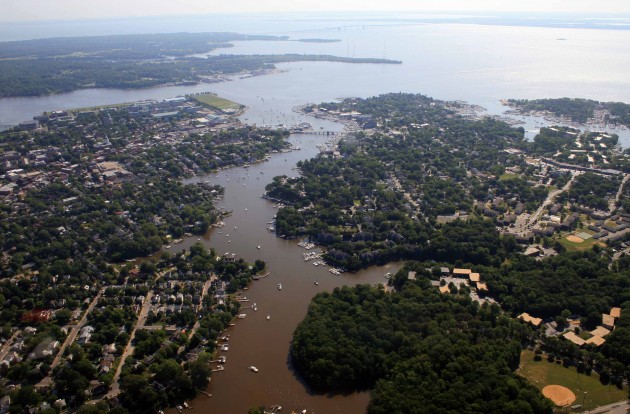 It is one of the largest and most productive estuaries in the world, yet dramatic changes are in store for the Chesapeake Bay in coming decades if climate change predictions hold true, say a team of scientists from the Smithsonian Environmental Research Center, the University of Maryland, Pennsylvania State University, and other research organizations in a recent paper published in the journal “Estuarine, Coastal and Shelf Science.”

Using forecasts of atmospheric carbon dioxide production for the coming century, the scientists predict the water of the Bay will see rising levels of dissolved carbon dioxide and higher water temperatures. As a result, climate change is expected to worsen problems of low dissolved oxygen concentrations in the Chesapeake’s water and cause sea levels to rise.

For fish and other organisms living in the Bay, the scientists predict:

With warming temperatures, “the species that make up the food web of the Chesapeake Bay will be impacted differently, likely disrupting the normal predator prey interactions between these animals,” says Denise Breitburg, a scientist at the Smithsonian Environmental Research Center in Edgewater, Md.  Hypoxia, or a lack of oxygen in the water, will be one prevailing characteristic of warmer Bay water, Breitburg predicts. “At warmer temperatures microbes will consume oxygen at a higher rate and less oxygen can dissolve in warm water. At the same time fish and perhaps other animals, will require more oxygen in warmer water.” With these factors in mind, “we would expect more severe episodes and negative effects of low oxygen in the Chesapeake,” Breitburg says.

The scientific paper “Potential climate-change impacts on the Chesapeake Bay,” is available at the Web address:  http://snurl.com/talub

On the Chesapeake Bay, Smithsonian plant physiologist Bert Drake has been studying one wetland’s response to climate change for more than two decades.