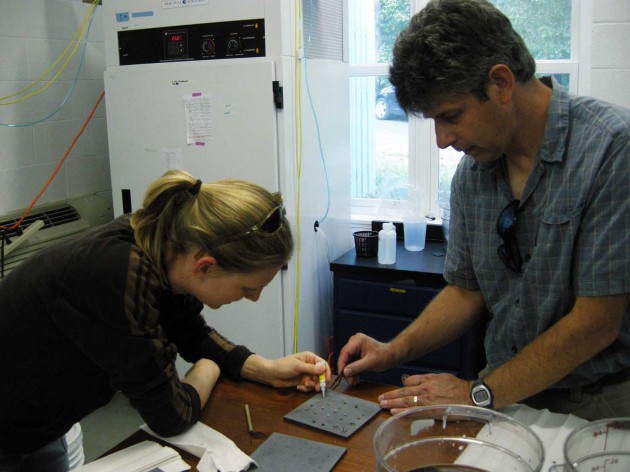 Amanda Reynolds and Whitman Miller use superglue to attach oysters to a plastic plate.

Using the spat of the Eastern oyster (Crassostrea virginica) glued to plastic plates and suspended in water, a team of scientists from the Smithsonian Environmental Research Center in Edgewater, Md., is taking a closer look at how rising acidification of ocean water may be impacting estuaries and near shore environments on the Chesapeake Bay. The scientists ultimately hope to understand how carbon dioxide in the water is affecting the population dynamics and ecology of oysters and other species.

In September 2010, SERC Ecologist Whitman Miller, Trace Element Lab scientist Fritz Riedel, research technician Amanda Reynolds and several volunteers used superglue to attach oyster spat to the plates. They then put the plates inside floating cages at three different study sites on the Chesapeake’s Rhode River:  a boat dock in Edgewater, a weir in an area known as Kirkpatrick Marsh, and a river basin just outside Kirkpatrick Marsh. Although the sites are relatively close together their water chemistry is different. 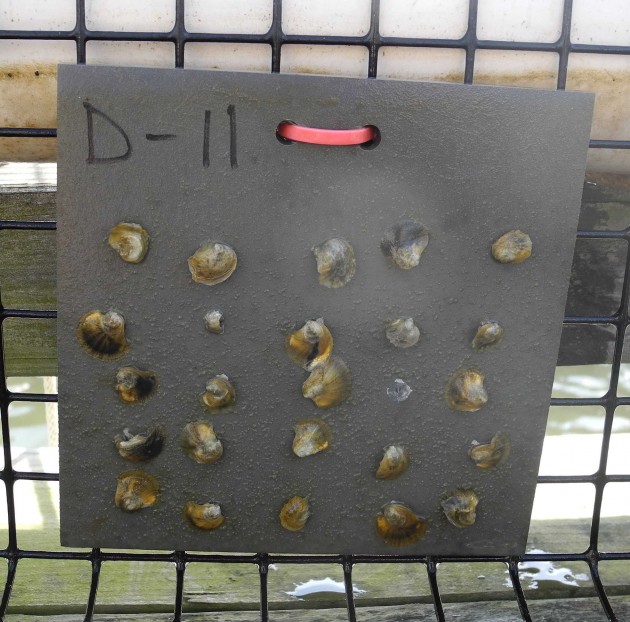 A plate of oysters that has been submerged at the dock in Edgewater for about one month.

Increased acidity caused by the ocean’s absorption of atmospheric CO2 in coming years may have dire consequences for oysters and other shellfish. The scientists are using the pH of the estuary waters as a proxy for how much CO2 is in the  water–a lower pH means more CO2 and a higher acidity.   Increased acidity means a lowering of the water’s pH level. When CO2 dissolves in seawater it creates carbonic acid that is rapidly transformed into carbonate and bicarbonate ions in the water. Increased acidity tips the balance toward bicarbonate formation and away from carbonate. Less carbonate in the water means the oysters have less material with which to build their shells, causing their shells to grow more slowly, grow not at all, or even begin to dissolve. 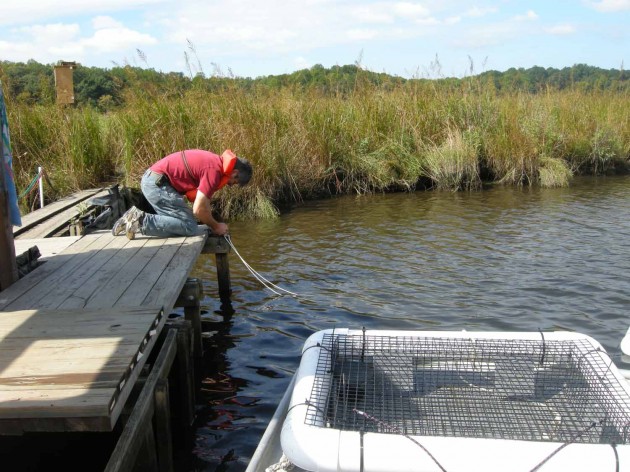 “Estuarine and coastal ecosystems may be especially vulnerable to changes in water chemistry because their relative shallowness, reduced salinity and lower alkalinity makes them inherently less buffered to changes in pH than the open ocean,” Reynolds says. “For organisms to survive in these waters, they must be able to withstand dramatic changes in carbonate chemistry and thus pH on a daily basis.”

The scientists are tracking the growth and survivorship of the spat, as well as the water chemistry in their study site to learn what pH levels and how much variation in pH the Eastern oyster can endure.

Along with the chemical data collected so far, the team is periodically taking snapshots of the oysters on the plates to analyze their growth. So far the results have been visually impressive, Reynolds says. “Even without formal growth analyses it is clear that the oysters on the dock have grown much larger than their oyster brethren at the weir, with the oysters at the basin falling somewhere in between.”