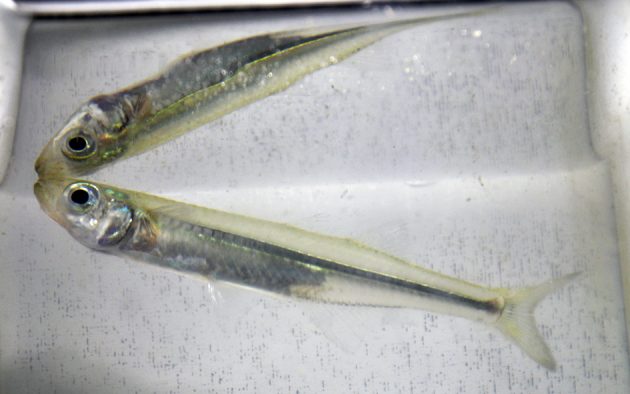 Higher acidity in coastal waters can make fish more sensitive to low oxygen, causing them to become debilitated and suffocate in water with oxygen levels that, although low, could otherwise sustain them, according to a new Smithsonian Environmental Research Center study published today in Marine Ecology Progress Series. This deadly combination—low oxygen and acidity—occurs when nitrogen-rich runoff gives algae and other aquatic organisms a growth boost that sucks oxygen from the water and pumps in carbon dioxide, raising acidity.

“When we look at combinations of stressors, sometimes we find effects that are much worse than when we look at them one at a time,” Denise Breitburg, Smithsonian senior scientist and co-author of the study says.  “We are often surprised at the consequences.”

The researchers studied two species of adult silversides fish, the Atlantic silverside and the inland silverside. Groups of three silversides were placed in tanks of water and exposed to one of four scenarios: lowered oxygen alone, lowered pH alone (raising acidity), lowered oxygen and pH simultaneously, and a control in which nothing changed. They measured at what point the fish first rose to the surface to find more oxygen, when the fish rose to the surface and stayed, and at what point all three silversides died. In a second experiment, they recorded how quickly the fish beat their gill flaps, a behavior that increases water flow and oxygen. 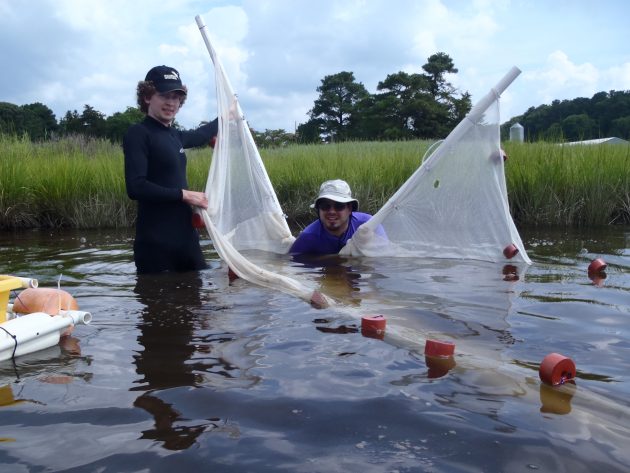 When oxygen and pH were lowered together, the researchers observed, both species began swimming to the surface at oxygen levels 25 to 60 percent higher than in the tank with lowered oxygen only. The fish also beat their gill flaps more slowly, a tactic that might protect them from acidification but makes them less able to handle sharp oxygen drops. Silversides also died at oxygen levels 10 to 54 percent higher in the high acidity/low-oxygen tank than in the low-oxygen only tank.

Increased susceptibility to suffocation was not the only danger posed by the hypoxia, acidification combination, the researchers observed. When fish surface, lose equilibrium and can no longer swim straight, they can’t escape or hide. “If a fish is out in the wild and loses its equilibrium, that fish is dead,” Seth Miller, postdoctoral fellow and lead author of the study, says. 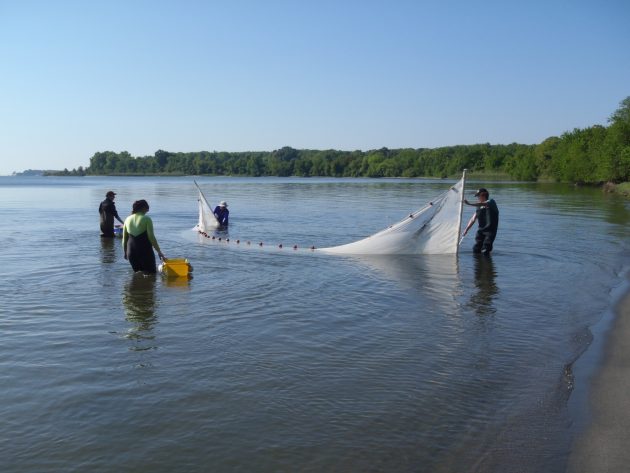 Nitrogen and other nutrients that end up in waterways have many sources, from agriculture and industry to lawn fertilizer and sewage overflow.

One surprise in the study was the discovery that acidity hurt adult fish. Past research had uncovered dangers for juvenile fish and larvae, but adults were thought to be more resilient to increases in acidity. “Acidification appears to be a stressor capable of directly and indirectly disrupting all life stages of organisms,” the scientists conclude, “even hardy adult estuarine fish…”

Worldwide, both low oxygen and acidity are expected to worsen as ocean temperatures rise. Until now, most research on how well fish cope has focused on either oxygen or acidification in isolation. This new study shows the consequences of the double threat: Fish exposed to low oxygen and high acidity can die at higher oxygen levels. This suggests low-oxygen thresholds considered “safe” by environmental regulators and others may not be safe at all.

“This study demonstrates the importance of testing multiple stressors when investigating the impact of climate change and other human effects on marine and estuarine organisms,” the researchers write. “If we had investigated only the effect of acidification, we could have concluded that it will have no effect on fish survival…”

“We are now moving on to looking at how acidification impacts species in combination with other stressors associated with climate change, such as higher temperatures, excess nutrients, changes in salinity and increased precipitation,” Miller says.

“Silversides are one of the most abundant fish in estuaries along the Atlantic Coast of the United States,” Miller adds. “They are tasty morsels to larger game fish, terrapins, blue herons…all sorts of species depend upon them. What happens to them can reverberate throughout the entire food web.”

Two major changes could help better protect fish and the creatures that depend on them, Breitburg says. First, it is critical to cut nutrient pollution and carbon emissions, since both can exacerbate low oxygen and acidification in coastal waters. Second, regulators need to treat acidification and low oxygen as linked problems, because they are so often linked in nature.