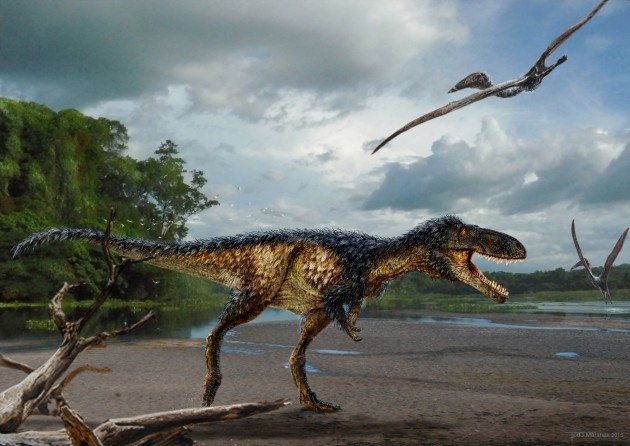 Life reconstruction of the new tyrannosaur “Timurlengia euotica” in its environment 90 millionyears ago. It is accompanied by two flying reptiles, “Azhdarcho longicollis”. (Original painting by Todd Marshall)

Pop quiz! Name the first five dinosaurs that come to mind. Chances are good that one you named was Tyrannosaurs rex, a popular favorite perhaps best known for its large size, fearsomeness and starring role in the “Jurassic Park” movies.

What you may not know about the tyrannosaurs is that they weren’t always the giant predators they are depicted as today. In fact, when tyrannosaurs first appeared during the Jurassic (170 million years ago), they were small, reaching about 10 feet in length, and lightly built. It wasn’t until the end of the Cretaceous—nearly 100 million years later—that tyrannosaurs achieved the massive size and weight of a T. rex.

Little was known about how this transition happened. Until now. 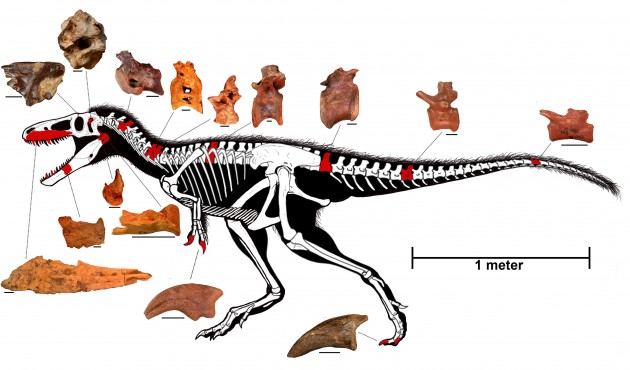 Reconstructed skeleton of “Timurlengia euotica” with discovered fossilized bones, highlighted in red, and other bones remaining to be discovered inferred from other related species of tyrannosaurs in white. Individual scale bars for the pictured fossilized bones each equal 2 cm. (Image copyright Proceedings of the National Academy of Sciences)

According to a study published today in the Proceedings of the National Academy of Sciences, the fossilized remains of a newly discovered horse-sized dinosaur reveal how T. rex and its close relatives evolved into the top predators of their time.

The new species, Timurlengia euotica, lived about 90 million years ago and fills-in a 20 million-year gap in the fossil record of tyrannosaurs during the early Cretaceous. A nimble pursuit hunter with slender, blade-like teeth suitable for slicing through meat, this new tyrannosaur was not an ancestor of T. rex. 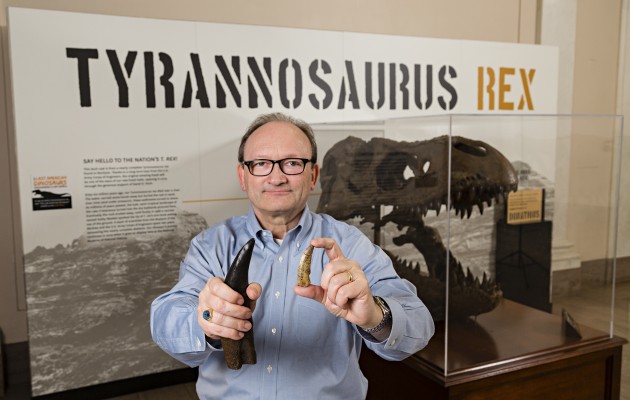 According to Hans Sues, chair of the Department of Paleobiology at the Smithsonian’s National Museum of Natural History and one of the paper’s co-authors, this new fossil helps answer the question of how tyrannosaurs evolved so rapidly at the end of the nearly 70 million-year period they lived on Earth.

“This fossil shows that tyrannosaurs developed their advanced head first,” Sues says. “Timurlengia’s skull, though much smaller than that of T. rex, shows a sophisticated brain that would have led to keen eyesight, smell and hearing.” 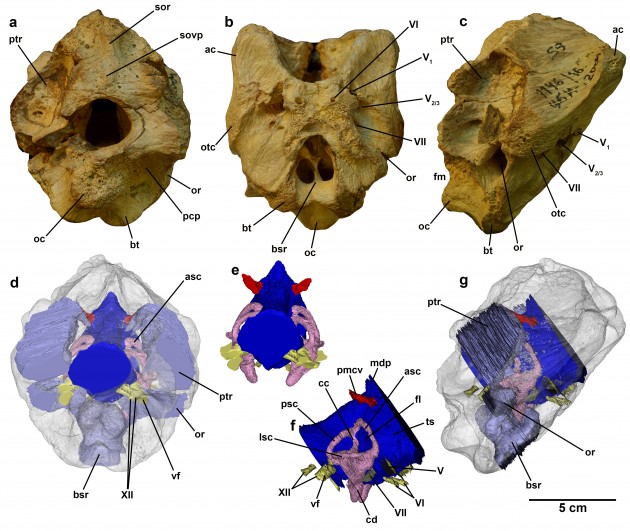 Top row: Partial braincase of “Timurlengia euotica” in tree views (L to R: from the back, from below, and from the right side). Bottom row: Composite images of the brain case from CT scanning. Reconstructed brain in dark blue, inner ear in pink, nerves in yellow, and blood vessel in red. (Image copyright Proceedings of the National Academy of Sciences)

At the same time tyrannosaurs were developing their acute senses and cognitive abilities, other large meat-eating dinosaurs were becoming extinct, opening up an opportunity for tyrannosaurs to become apex predators.

The fossils used in the study were collected by Sues and his colleague Alexander Averianov from the Russian Academy of Sciences over a 10-year period during expeditions to the Kyzylkum Desert in Uzbekistan. Many familiar groups of Cretaceous dinosaurs have their roots in Central Asia and some of these would go on to flourish in North America. 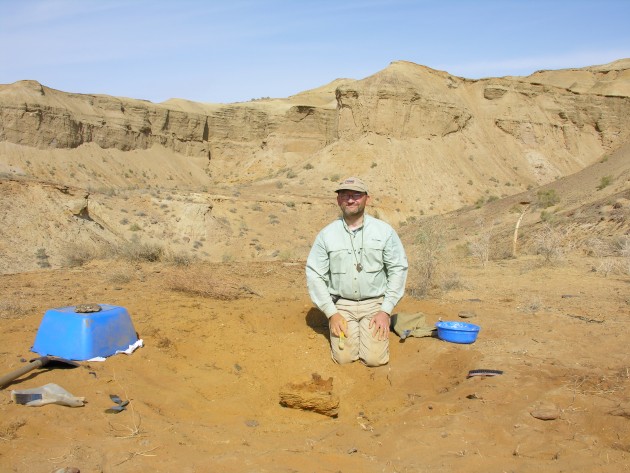 Hans Sues, a scientist at the Smithsonian’s National Museum of Natural History, excavating a dinosaur fossil at Dzharakuduk in the Kyzylkum Desert of Uzbekistan, September 2006. (Hans Sues photo)

T. euotica’s remains were later analyzed by Sues and a team of paleontologists led by Stephen Brusatte at the University of Edinburgh and determined to be a new species. Using CT scans of Timurlengia’s brain case, the team was later able to reconstruct its brain and learn more about its senses.

“Timurlengia answers the question of how later tyrannosaurs gain the advantages of size and acute senses,” Sues says. “This new fossil shows a complex inner ear and nerves that fit with what we know about T. rex.”

“New discoveries like this show that there is still so much to be discovered about the history of dinosaurs,” Sues continues. “It’s not every day that you find a new tyrannosaur.”