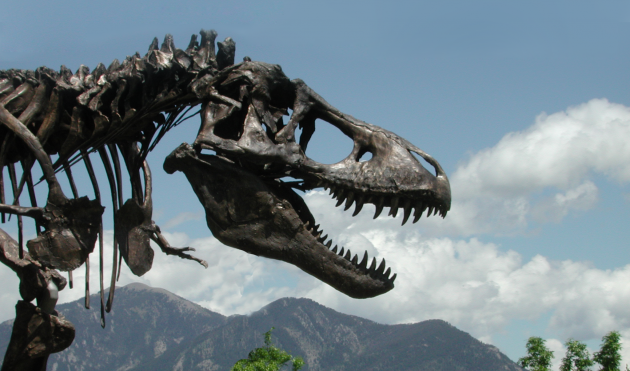 A close-up of the skull of the Tyrannosaurus rex skeleton known as the Wankel T.rex which was installed in front of the Museum of the Rockies at Montana State University in Bozeman, Montana in 2001.

The National Museum of Natural History announced this summer that it has reached a 50-year loan agreement with the U.S. Army Corps of Engineers to transfer a Tyrannosaurus rex skeleton to the Smithsonian for eventual display in the museum’s new dinosaur hall, scheduled to open in 2019. The skeleton is one of the most complete T. rex specimens ever discovered, with 80–85 percent of the skeleton recovered, including the skull. Known as the “Wankel T. rex,” the rare fossil was found in 1988 by Kathy Wankel, a rancher from Angela, Mont., on federal land near the Fort Peck Reservoir in eastern Montana. It was loaned by the U.S. Army Corps of Engineers to the Museum of the Rockies in Bozeman, Mont., from 1990 to 2011.

The Wankel T. rex was excavated in 1989–90 by a team led by paleontologist Jack Horner. The Museum of the Rockies announced plans to mount a second T. rex skeleton, also owned by the U.S. Army Corps of Engineers, in its Siebel Dinosaur Complex in 2014. 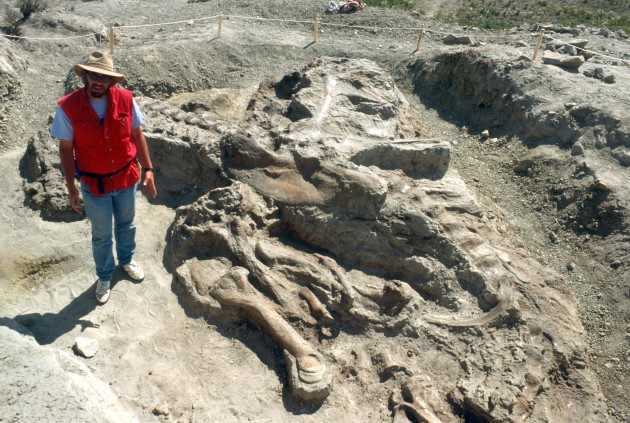 Jack Horner, Curator of Paleontology at Museum of the Rockies, provides scale for Tyrannosaurus rex fossils at excavation site near the Fort Peck Reservoir, Fort Peck, Mont., June 1990. Named for its discoverer, Kathy Wankel, the Wankel T.rex is estimated to have weighed six to seven tons.

T. rex was one of the largest carnivorous animals ever to live on land, reaching 40 feet in length and weighing more than five tons. T. rex roamed much of western North America 68–66 million years ago, alongside herbivorous dinosaurs such as the horned Triceratops and duck-billed Edmontosaurus. Only a few nearly complete skeletons of T. rex are on display anywhere in the world, and the Wankel T. rex is one of the most famous and best-studied among them. The completeness and preservation of this specimen will allow new research while it is on display as a centerpiece in the new dinosaur exhibition.

“We are thrilled to welcome this extraordinary T. rex fossil to the Smithsonian,” said Kirk Johnson, the Sant Director of the National Museum of Natural History. “We wish to extend our sincere appreciation to the U.S. Army Corps of Engineers, the Museum of the Rockies, the state of Montana and the Wankel family for all they have done to make this possible. With the arrival of the Wankel T. rex, our museum visitors will be able to marvel at one of the finest dinosaur specimens in the world.”

“For more than 200 years, the U.S. Army Corps of Engineers has served the American people as stewards of our abundant natural resources,” said Brig. Gen. Anthony Funkhouser. “We are excited to be a part of this partnership to bring such a remarkable T. rex specimen to our nation’s capital for millions of people to enjoy and for Smithsonian scientists to study.”

“We are honored that the Wankel T. rex will be representing Montana at the national museum,” said Waded Cruzado, president of Montana State University. “This is such an important paleontological find, and all of us are very proud to see it displayed for the nation and the world.”

In May 2012, the Smithsonian announced plans to create a new hall of prehistoric life in the National Museum of Natural History in what will be the largest and most complex renovation in the museum’s history. The new hall will feature specimens from the museum’s unrivaled collection of 46 million fossils and present the latest scientific research in paleobiology. The existing dinosaur hall will remain open until spring 2014, when it will close to the public to begin construction. Selected dinosaur fossils will remain on view in other public areas of the museum until the new hall opens in 2019.

Construction of the new hall is made possible through the largest single gift in the history of the museum—a $35 million donation from philanthropist David H. Koch, executive vice president of Koch Industries.