Finding a fossil is the first step, recognizing it for what it truly is, is the real challenge.

While closely studying three fossil skeletons from museum collections a team of scientists from the Smithsonian’s National Museum of Natural History, the Carnegie Museum of Natural History and the University of Utah, reached that “aha!” moment with the realization they had discovered a new bird-like dinosaur previously unknown to science. They named it Anzu wyliei, in part after a feathered demon from ancient Mesopotamian mythology. 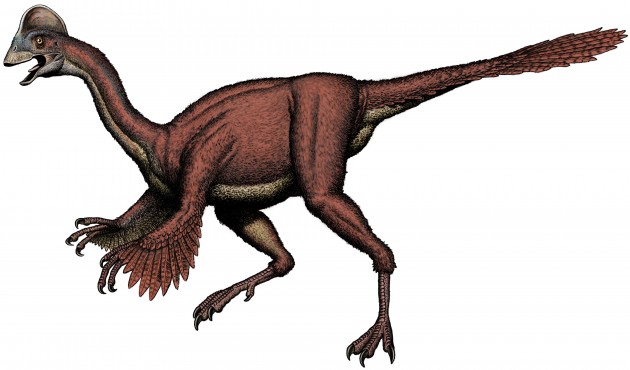 An illustration of Anzu wyliei shows its long, slender ostrich-like neck and hind legs; unlike an ostrich, A. wyliei also had forelimbs that were tipped with large, sharp claws. (Illustration courtesy Bob Walters)

The discovery represents the first North American example of a species belonging to Oviraptorosauria, a group of dinosaurs mostly known from fossils found in Central and East Asia. “For almost one hundred years, the presence of oviraptorosaurs in North America was known only from a few bits of skeleton. The details of their appearance and biology remained a mystery,” says Dr. Hans-Dieter Sues, curator of Vertebrate Paleontology at the National Museum of Natural History. “With the discovery of A. wyliei, we finally have the fossil evidence to show what this species looked like and how it is related to other dinosaurs.”

No BBQ is large enough for this discovery

Resembling a cross between a modern emu and a reptile, the new dinosaur A. wyliei is a striking find. Originally collected in the early 1990s, the bones of the newly described dinosaur were found in the Upper Cretaceous Hell Creek Formation in North and South Dakota, inspiring scientists to nickname it “The Chicken from Hell.” 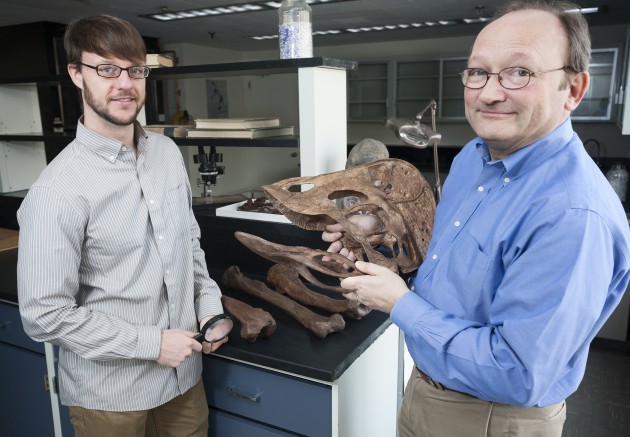 Described for the first time today in the scientific journal PLOS ONE, A. wyliei stood 5 feet tall at the hip and was roughly 11 feet long, resembling a large flightless bird with feathers on its arms and on its extraordinarily long tail. It had a toothless beak and a tall crest on top of its skull, similar to an Australian cassowary. Its neck and hind legs were long and slender, like that of an ostrich, but here the bird similarities end. Its forelimbs were tipped with large, sharp claws.

Alive during the Cretaceous Period from about 68 to 66 million years ago, A. wyliei would have roamed at the same time as the Tyrannosaurus rex and triceratops.  A. wyliei is likely to have suffered the same fate as its dinosaur contemporaries, dying out in the great extinction event when an asteroid hit the earth.

“While we are certain that this species had feathers like its Asian relatives, we are pretty sure that modern birds did not evolve from this group,” Sues points out. “Unfortunately there is no evidence of these creatures after the asteroid impact 66 million years ago, however other feathered dinosaurs such as the dromaeosaurids lived on. These include the well-known velociraptors which we believe are the ancestors of our birds.”

Bones can give an insight to a way of life

Before its unfortunate demise A. wyliei would most likely have been found wandering the humid floodplains of North America. “The three skeletons were found in mudstone rock that was deposited on ancient floodplains,” Sues says. “This differs greatly from their Asian oviraptorid cousins, which are found in rocks deposited under arid to semi-arid conditions.” 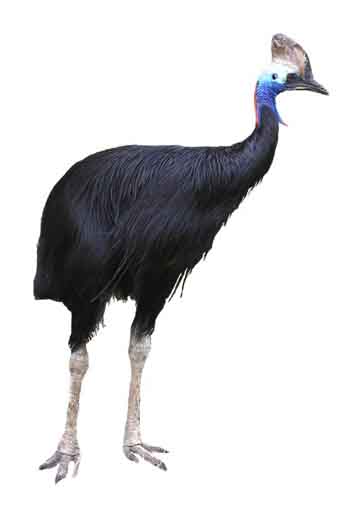 Cassowaries are a large flightless birds from tropical forests of New Guinea and northeastern Australia. (Photo by Michal Zacharzewski)

While much of the new dinosaur’s way of life remains a mystery, the structure of its skull has given scientists some clues as to its preferred food and mode of social interaction. They believe the jaw structure of A. wyliei suggests it was an omnivore, able to eat meat and plants. The function of the bony crest on top of its skull is less clear but has alluded to more flamboyant theories of its lifestyle.

“The crest on the skull is very large and made of paper-thin bone, so it was not able to take much stress,” Sues says. “All oviraptosaurs have this crest but it is certainly the largest in A. wyliei. The most likely function is for display, showing off to members of your own species. The Australian cassowary has a similar crest which is thought to be used to attract mates, so it is possible that A. wyliei could have used its crest in a similar fashion.”

Analyses of the A. wyliei fossils have not only given insight into the life of this new species but also the amazingly diverse family to which it belongs, the Caenagnathidae. This group included species that were as small as turkeys and as large as A. wyliei.

As part of their study the research team confirmed previous suggestions that Gigantoraptor, the largest known oviraptorosaur at 1.5 tons, is an Asian member of Caenagnathidae. “Although we expected to find these dinosaurs in both Asia and North America as the land masses were connected at one time, we now know North American oviraptorosaurs were more closely related to each other than they were to most of their Asian cousins,” Sues says.

Come see the dinosaurs that roamed with A. wyliei

The National Museum of Natural History will showcase dinosaurs and other fossils from the world in which A. wyliei lived as part of its upcoming exhibition, “The Last American Dinosaurs: Discovering a Lost World,” which opens Nov. 25. The exhibition will feature specimens from 68 to 66 million-year-old rock formations, such as Tyrannosaurus rex and triceratops.

“The Hell Creek Formation has been intensely studied by paleontologists for more than a hundred years, and we’re still finding phenomenal specimens,” said Kirk Johnson, Sant Director of the National Museum of Natural History. “We are excited and honored to continue sharing our collection of fossil discoveries with our visitors for years to come.”