On April 15 the National Museum of Natural History took delivery of a nearly complete Tyrannosaurus rex skeleton. Called the Nation’s T. rex, it will be the centerpiece of the museum’s new 31,000-square-foot dinosaur and fossil hall, which is slated to open in 2019. The current dinosaur and fossil hall will close to the public at the end of the day April 27 in preparation for the largest, most extensive exhibition renovation in the museum’s history.

To celebrate the legacy of dinosaurs in the Nation’s capital, a variety of programs will be offered for the remainder of the month of April. The museum also plans to launch three interim dinosaur-focused exhibitions this year that will give visitors a chance to immerse themselves in the ancient world of dinosaurs and cutting-edge paleontological research. The museum is planning additional exhibitions and programs for 2015–2019. 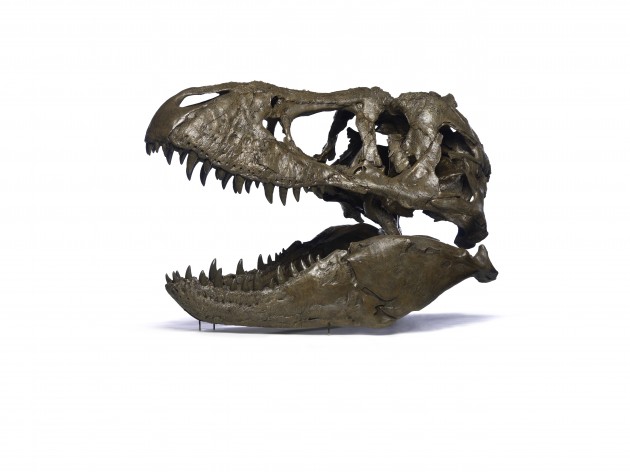 Tyrannosaurus rex Osborn (Cast) Known as the “Wankel T. rex,” the rare fossil was found in 1988 by Kathy Wankel, a rancher from Angela, Mont., on federal land near the Fort Peck Reservoir in eastern Montana.

“Tyrannosaurus rex is truly the king of dinosaurs,” said Kirk Johnson, the Sant Director of the National Museum of Natural History. “We could not be more excited to welcome the Nation’sT. rex to Washington so it can be enjoyed by our 8 million visitors a year and serve as a gateway to the vast world of scientific discovery.”

The new T. rex, on loan for 50 years from the U.S. Army Corps of Engineers, was discovered on federal land in 1988 by Montana rancher Kathy Wankel. A team of paleontologists from the Museum of the Rockies in Bozeman, Mont., led by paleontologist Jack Horner, excavated the fossil from 1989 to 1990. It was then transferred to the Museum of the Rockies by the Corps for preparation and housing. It is one of the largest and most complete T. rex specimens ever discovered, with 80–85 percent of the skeleton recovered. The Nation’s T. rex arrived April 16 via FedEx. 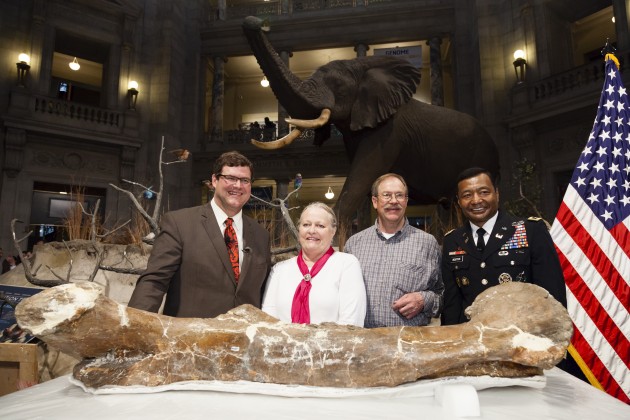 On April 15, 2014, the National Museum of Natural History welcomes the Nation’s T. rex to the Smithsonian Institution. The Tyrannosaurus rex specimen, on loan from the U.S. Army Corps of Engineers, is the Museum’s first nearly-complete T. rex skeleton, and will be the centerpiece of the Museum’s renovated fossil hall slated to open in 2019. (From left) Kirk Johnson Ph.D., Sant Director, National Museum of Natural History, Smithsonian Institution; Kathy and Tom Wankel, the individuals who discovered the T.rex in Montana in 1988; and Lt. Gen. Thomas P. Bostick, Chief of Engineers and Commanding General, United States Army Corps of Engineers. (Photo by James Di Loreto / Smithsonian Institution)

The New Dinosaur and Fossil Hall

The new hall will be named in recognition of David H. Koch, a philanthropist and executive vice president of Koch Industries Inc. His gift—$35 million of the exhibition’s total projected cost of $48 million—is the largest single gift in the history of the Natural History Museum. The exhibition will showcase impressive specimens from the museum’s unrivaled collection of 46 million fossils; structured as a journey through time, it will start from the formation of Earth and the beginnings of life through 10 geologic time periods and two major extinctions.

As the renovation progresses, the museum will update visitors about major milestones in the immense makeover through various channels, including social media and Q?rius, the museum’s educational learning lab, and temporary exhibits around the building.

Dinosaurs will continue to be on view at the museum through three new interim exhibitions and additional exhibitions and programs during the five-year renovation period. The 1,830-square-foot Rex Room, opening April 15, will offer visitors the unique opportunity to see staff members unpack, catalog, photograph and 3-D scan the 66-million-year-old bones of the Nation’s T. rex. Visitors will also have the rare chance to see a line-up of skulls from four different species of tyrannosaur specimens loaned by the Bureau of Land Management.

The “Augmented Reality Dinosaurs” exhibition opens in late May on the museum’s second floor. Appshaker, a London-based digital company, created a project that allows museum goers to interact “virtually” with dinosaurs such as T. rex, Triceratopsand Troodon, in a setting that represents their ancient natural habitat.

“The Last American Dinosaurs: Discovering a Lost World,” a 5,400-square-foot exhibition, opens Nov. 25 and tells the story of the final days of dinosaurs found in the Hell Creek Formation of North Dakota. Visitors can explore this world of 66 million years ago, before an enormous and sudden asteroid impact drastically altered the flora and fauna forever. Triceratops, T.rex and many other fossils large and small will help visitors appreciate how the planet’s ecosystems respond to drastic environmental changes. The exhibition will also feature a special area on fossilization and fossil finding as well as the museum’s popular FossiLab, a working laboratory staffed by experts and volunteers that gives visitors a personal glimpse into fossil preparation and the day-by-day process of paleontological discovery.

How a giant T. Rex packs for a road trip