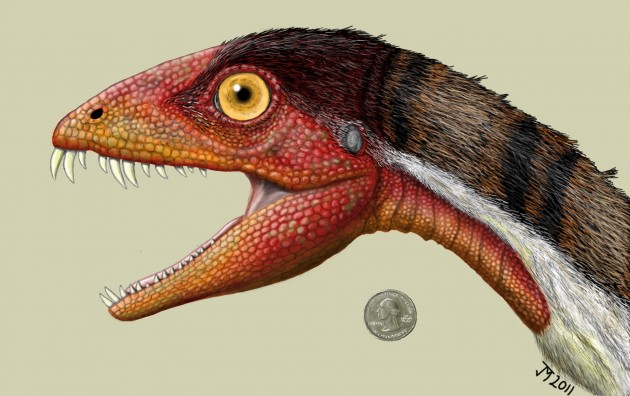 Image right: This rendering of Daemonosaurus chauliodus by Jeffrey Martz shows its size relative to an American quarter. Click to enlarge.

A team of scientists led by the Smithsonian Institution has discovered a fossilized dinosaur skull and neck vertebrae that not only reveal a new species, but also an evolutionary link between two groups of dinosaurs. The new species, Daemonosaurus chauliodus, was discovered at Ghost Ranch, N.M. The team’s findings are published in the Proceedings of the Royal Society B, Wednesday, April 13.

The oldest known dinosaurs walked or ran on their hind legs and included early predatory species such as Herrerasaurus. They existed in what are now Argentina and Brazil early in the Late Triassic Period, approximately 230 million years ago. The evolutionary position of these early predatory dinosaurs was contentious because there was a gap in the fossil record between them and later theropod dinosaurs. The team’s discovery of Daemonosaurus chauliodus helps fill in this gap. 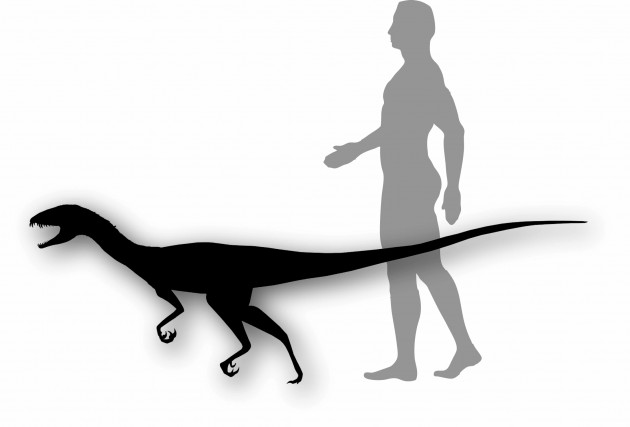 Daemonosaurus chauliodus is estimated to have been similar in size to a tall dog.

Because only the skull and neck of Daemonosaurus were found, the total length of the new species is unknown. The dinosaur’s skull, however, is narrow and relatively deep, measuring 5.5 inches long from the tip of its snout to the back of the skull and has proportionately large eye sockets. The upper jaw has large, forward-slanted front teeth. It is this feature that helped the scientists name the species. The name Daemonosaurus is based on the Greek words “daimon” meaning evil spirit (because it was found at Ghost Ranch), and “sauros” meaning lizard or reptile. The species name chauliodus is derived from the Greek word for “buck-toothed” and refers to the species’ big slanted front teeth.

The skull of Daemonosaurus chauliodus is narrow and relatively deep, measuring 5.5 inches long from the tip of its snout to the back of the skull and has proportionately large eye sockets. (Carnegie Museum of Natural History)

Daemonosaurus, a basal (primitive) theropod species, was dated to the latest part of the Triassic Period approximately 205 million years ago, just before the beginning of the Jurassic Period. This altered the previous belief that all basal dinosaurs had vanished millions of years earlier. The skull and neck vertebrae of Daemonosaurus also revealed several features similar to those in neotheropods—the succeeding group of dinosaurs on the evolutionary timeline.

“Various features of the skull and neck in Daemonosaurus indicate that it was intermediate between the earliest known predatory dinosaurs from South America and more advanced theropod dinosaurs,” said Hans Sues, curator of vertebrate paleontology at the Smithsonian’s National Museum of Natural History and lead author of the team’s findings.  “One such feature is the presence of cavities on some of the neck vertebrae related to the structure of the respiratory system.”

This new discovery shows that there is still much to be learned about the early evolution of dinosaurs. “The continued exploration of even well-studied regions like the American Southwest will still yield remarkable new fossil finds,” Sues said.