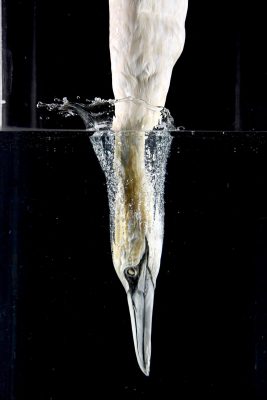 Researchers simulated a gannet plunging into water, capturing the process with a high-speed camera. (Image by Sunny Jung/Virginia Tech)

To surprise their prey, some species of seabirds dive into the water at speeds greater than 50 miles per hour. A human diver entering the water that fast would likely sustain serious injuries, but birds, such as gannets and boobies, pull off these dives safely in spite of their slender necks.

“We were interested in what happens when objects plunge into water, so we looked for examples in nature; the gannets are incredible,” said Sunny Jung, an associate professor of biomedical engineering and mechanics in the College of Engineering and an expert in fluid biomechanics; he has also studied dogs’ unusual drinking technique and how shrimp use microscopic bubbles to hunt.

In a new study published in the Proceedings of the National Academy of Sciences, Jung, Smithsonian ornithologists Lorian Straker and Carla Dove and their co-authors investigate the biomechanics of gannets’ dives. They found that the birds’ head shape, neck length and musculature, and diving speeds work in concert to ensure that the force of the water doesn’t buckle their slim necks.

Previous studies of the diving birds have focused on ecological aspects of this hunting behavior, called “plunge diving.” Jung’s is the first paper to explore the underlying physics and biomechanical engineering that allow the birds to plunge beneath the water without injury.

To analyze the bird’s body shape and neck musculature, the team used a salvaged gannet provided by the North Carolina Museum of Natural Sciences. They also created 3-D printed replicas of gannet skulls from the collection at the Smithsonian’s National Museum of Natural History, which helped them measure the forces on the skull as it enters the water. 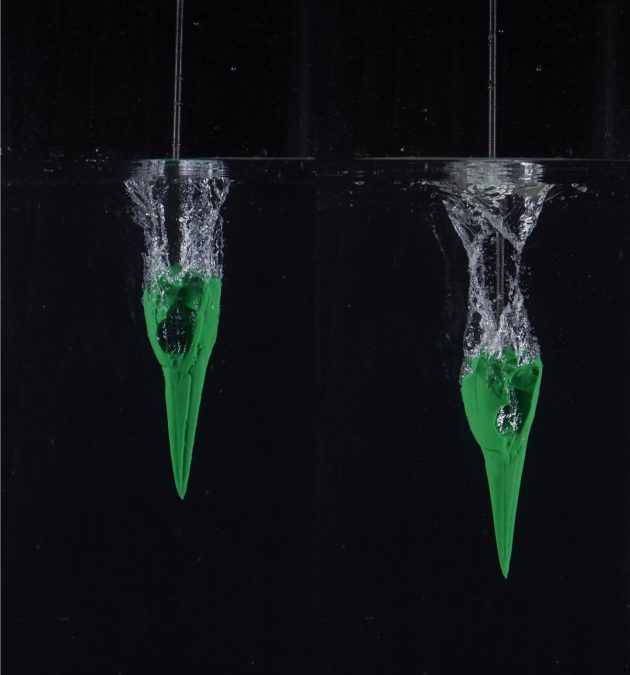 Replicas of gannet skulls from the collection at the Smithsonian Institution allowed researchers to measure the forces a bird’s skill experiences during a dive. (Photo by Sunny Jung/Virginia Tech)

The primary force acting on the gannet’s head as it plunges beneath the water is drag, which increases with speed. To analyze what other parameters affect the force the bird experiences, the researchers created a simplified model from a 3-D printed cone on a flexible rubber “neck,” and plunged this system into a basin of water, varying the cone angle, neck length, and impact speed. High-speed video showed whether the neck buckled.

Their analysis revealed that the transition from stability to buckling depends on the geometry of the head, the material properties of the neck, and the impact speed; at typical gannet diving speeds, the birds’ narrow, pointed beak and neck length kept the drag force in a safe range.

“What we found is that the gannet has a certain head shape, which reduces the drag compared to other birds in the same family,” Jung said.

The researchers also discovered that the birds further reduce the risk of buckling by contracting their neck muscles before impact, straightening the S-shaped neck.

The team is already extending their work to other species.

“One implication of this study is safety criteria for human divers,” Jung said.

Humans are at a disadvantage relative to gannets; in contrast to the bird’s pointed beak and slender neck, humans’ feet create a flat surface that increases the force of impact with the water. This force can be strong enough to break bones and cause organ and tissue damage.

Jung and Chang are also applying their research on diving birds, supported in part by the Institute for Critical Technology and Applied Science and the National Science Foundation, to their work with a Virginia Tech senior design team on a gannet-inspired underwater projectile for autonomous sensing.