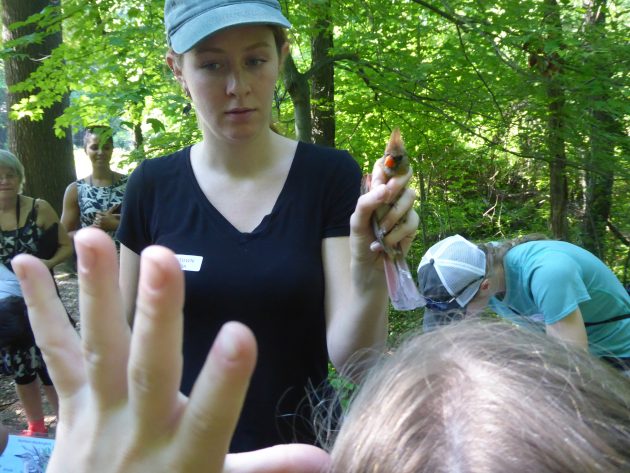 Firm though it was, Kaitlyn Wilson’s gentle grip on the rust-brown female cardinal didn’t stop the bird from twisting its head around to deliver a savage nip. With the slightest wince, Wilson carried on speaking to a rapt group of second-graders, all of whom gazed, transfixed, at the feisty bird in her hand.

“Anyone know what else these big beaks are good for, other than giving me a good bite?” Wilson asked.

Wilson, a bird- banding educator and researcher with the Smithsonian Migratory Bird Center’s Urban Nestwatch project, had come to Jamestown Elementary School in the Washington, D.C. suburb of Arlington, Va., on this hot and muggy May morning to give the kids a up-close look at some of the birds with whom they share their yards. The cardinal was one of four birds that blundered into two fine-mesh nets that Wilson had set up earlier with Jax Mack and Amanda Werrell, who are also Nestwatch educators and researchers. 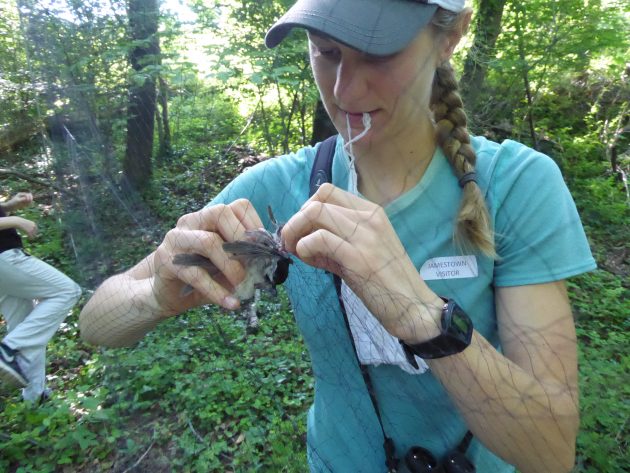 Kaitlyn Wilson frees a Carolina chickadee from a mist net set up to capture birds for identification, measurement and banding for a school demonstration. With data on birds that live in and migrate through seven urban sites throughout the United States, researchers can make observations and address questions about how human development impacts birds and other wildlife.

Thrilling though it was for the students to see birds up close, they were also contributing to a much larger project to study birds in heavily populated areas. The information researchers like Wilson, Werrell and Mack gather on birds at schools in seven cities across the United States is used to help assess the impact of human development on birds and other wildlife across a suburb-to-city gradient. By watching Urban Nestwatch staff handle, band and measure birds captured that morning, the students had a front-row seat in observing how field research and data collection are accomplished.

Urban Nestwatch originated six years ago from Neighborhood Nestwatch, a citizen science program launched in 2000 that takes place in backyards across the U.S. To date, more than a dozen scientific papers have been written from data collected from these programs. Study subjects have included close looks at the West Nile virus, human-generated noise impacts on birds, nesting success and public participation in environmental research.

“Birds which are color banded at Urban Nestwatch sites contribute to a large database that represents thousands of birds captured in backyards and schoolyards,” says Robert Reitsma, the program coordinator for Urban Nestwatch. “Observations of these birds made throughout the years help to determine just how well these birds are surviving and coping with rapid habitat change.” 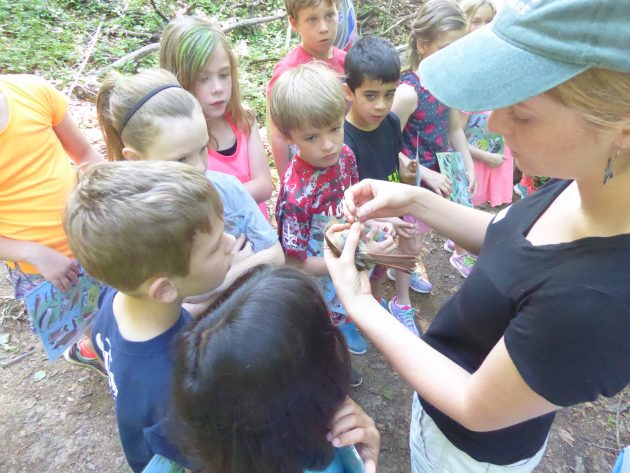 Amanda Werrell demonstrates how birds are handled, measured and banded for second-grade students at Jamestown Elementary School in Arlington, Va.

“These educational opportunities help build a sense of preserving the environment beyond one’s own limited sphere,” Reitsma adds. “By bringing live, wild birds captured on school grounds directly into view, Urban Nestwatch sends kids to a real place outside their own lives—some for the first time—and raises an awareness that there are other creatures on this planet that need protection.”

Though the Washington, D.C. region is the longest-running study area, the project now includes pilot programs in Springfield, Mass., Pittsburgh; Raleigh, N.C.; Atlanta; and Gainesville, Fla. The recent start of a pilot program in Denver represents the first step of a westward expansion that will hopefully someday include cities on the West Coast. 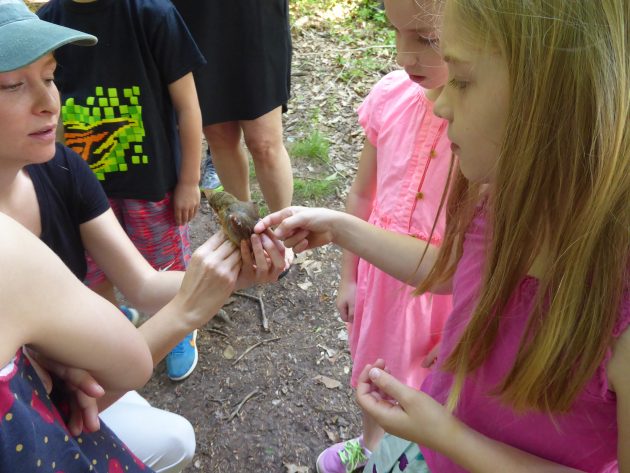 One highlight of the bird-banding demonstration is the opportunity for each student to have a moment of gentle hands-on contact with a live wild bird.

Jamestown also participates in the Smithsonian’s Bridging the Americas program, a partnership between schools on opposite ends of some migratory birds’ travel routes between the mid-Atlantic region and Nicaragua. With birds as the vehicle for lessons in science, history, language and social science throughout the year, participating teachers use a supplementary Smithsonian curriculum to give their students a more comprehensive view of the natural world.

After showing her study group how to band a bird and take measurements on wing and tail length, Wilson concludes the demonstration by showing the kids how to check for whether the bird may have a nest nearby. Bending over she blew a puff of air on the bird’s belly, revealing a large bare spot under the female cardinal’s chest feathers.

The kids gasped in wonder at the bird’s vibrating chest, listening to Wilson’s explanation of how the bald brood patch is a key part of egg incubation. 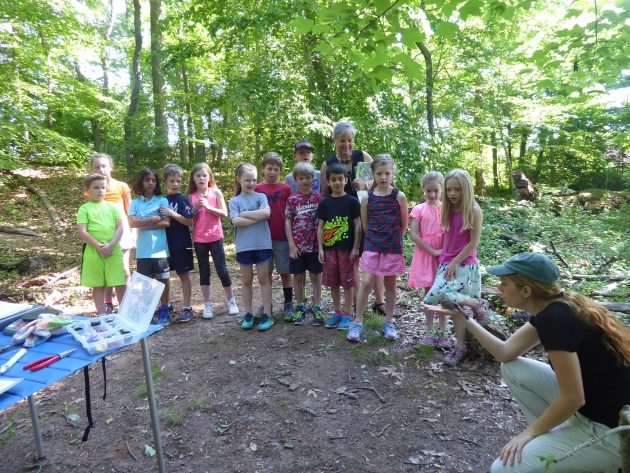 Students in Lainie Ortiz’ second grade class at Jamestown Elementary School in Arlington, Va. say goodbye to a female northern cardinal after Amanda Werrell completes her assessment and banding of the bird.

Becky Cullinan, who came along to watch her daughter Aoife participate in the banding demonstration with the rest of her second-grade class, says the excursion is the perfect capstone to lessons that have extended to the rest of her family.

“Activities like this really make it so that the kids are able to absorb how things are connected, even though they’re so far apart,” Cullinan says. “In our yard, we’ve always had feeders, but since my daughter has been learning about who lives here and who leaves, we’ve all come to recognize the different birds that live around our house, and when they come and go.”

As part of the springtime demonstrations, Wilson, Werrell and Mack also walked the students through a “migration vacation,” in which the kids journey to a dozen or so stations to learn about the challenges of long-distance migration. At each stop, they learned how birds take advantage of resources along the way to rest and refuel, and how birds face numerous obstacles and hazards like contaminated water, lack of food, power lines, storms and predators.

“Billions of birds die just from being caught by cats. How do you think you can help them?” Wilson asked again. 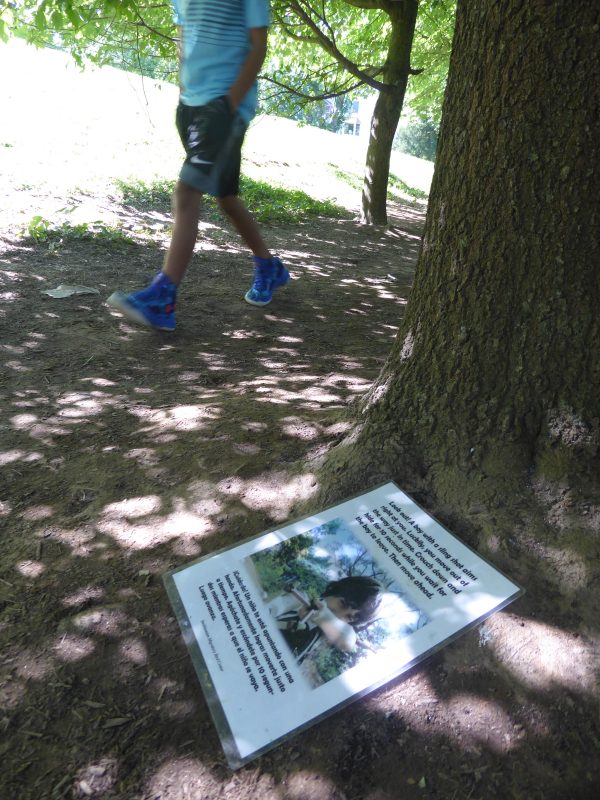 A student at Jamestown Elementary School in Arlington, Va., walks past a game card during an Urban Nest Watch event for his second-grade class. Imagining themselves as gray catbirds, the students made their own mock migration from Costa Rica through hazards including development, pollution, stormy weather and predators before arriving at their summer breeding grounds in Virginia. By learning about the hurdles migrating birds face in addition to the great distances they cover, the students learned a few strategies they can employ in their own homes for making that task easier for their native bird species.

Wilson laughed. “Well, no, we can still have cats, but if we keep them inside they can’t get birds,” she says. “Just remember, these are little tiny creatures that fly a really, really long way. Even the little things we do can help them. It’s rough out there.”

Lainie Ortiz, whose class Wilson and Mack worked with during the morning activities, added that the demonstration also offered many spontaneous “teachable moments” offering students a deeper insight into the often hidden side of science. One student, for example, asked whether the measurements Wilson was taking were in inches or millimeters.

“We’d just completed our unit on measurement, and the scientist responded that millimeters were actually more appropriate for measuring the many small parts of a bird, and also because scientific data always uses the metric system,” Ortiz says. “This project has been a great asset to the students at Jamestown and an indispensable lesson to our school community in environmental education and responsibility.”