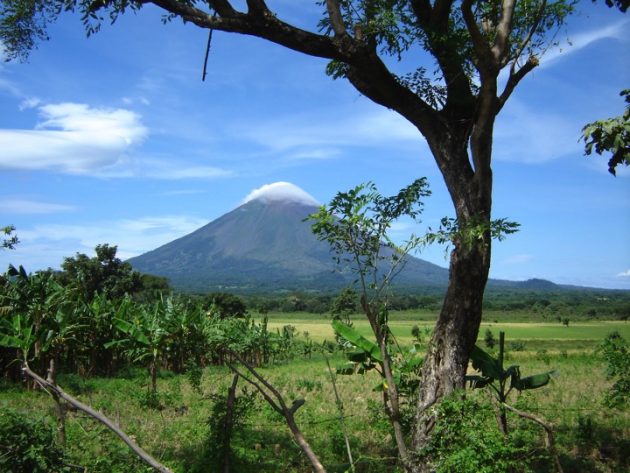 With an area of about 100 square miles, Ometepe is the largest island in the world that’s situated in a freshwater lake. The island’s hourglass shape results from two volcanoes. (Photos courtesy Mary Deinlein)

By now, most of the United States has started to feel the first cool caresses of winter. Everything is pumpkin spiced, and the last crickets are heralding the end of the year. Our feathered friends, however, haven’t waited for sweater weather to start their trek to warmer climes: by the end of October, most of North America’s migratory bird species have arrived in their southern wintering grounds.

Since 1993, the Migratory Bird Center at the Smithsonian’s National Zoo has worked to connect schoolchildren in places where these birds divide their time, and a new influx of technology is bringing these distant worlds closer together. Through its program Bridging the Americas (Unidos por las Aves), the Center is getting students to better understand migratory birds and their reliance on habitats in geographically disconnected parts of the world.

For the last 15 years Education Specialist Mary Deinlein has been working closely with schools in the D.C. metro area and Ometepe, a volcanic island in Nicaragua’s largest lake. By sharing their research, art and knowledge of birds, students on either end of the birds’ migratory routes learn just how linked they are, and how choices they make at home impact animals and people thousands of miles away. 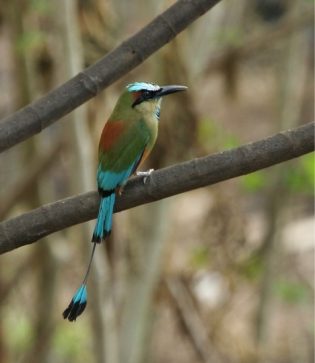 One resident of Ometepe is the guardabarranco—the national bird of Nicaragua. In English, it’s known as the turquoise-browed motmot.

When it is winter in North America, Ometepe’s forest canopy is flitting with North America’s summertime birds: from tiny ruby-throated hummingbirds, to vibrant yellow warblers and watchful broad-winged hawks. Conveying an understanding that our local birds maintain a life elsewhere despite disappearing from our yards and forests for months on end is a central goal of Bridging the Americas.

“Kids’ connection with nature deepens, and their overall view of the world broadens, when they consider the world through the lens of migratory birds,” Deinlein says. “You can’t think about migratory birds without thinking about where they are when they’re not with us. It’s a great way to think about being connected to other places.”

Of North America’s 650 breeding bird species, roughly 350 fly hundreds to thousands of miles between their seasonal residences. Many songbirds, raptors and shorebirds and even a couple of waterfowl species trade their temperate habitats for those featuring spiny ceiba trees and the twin volcanoes of Ometepe Island. 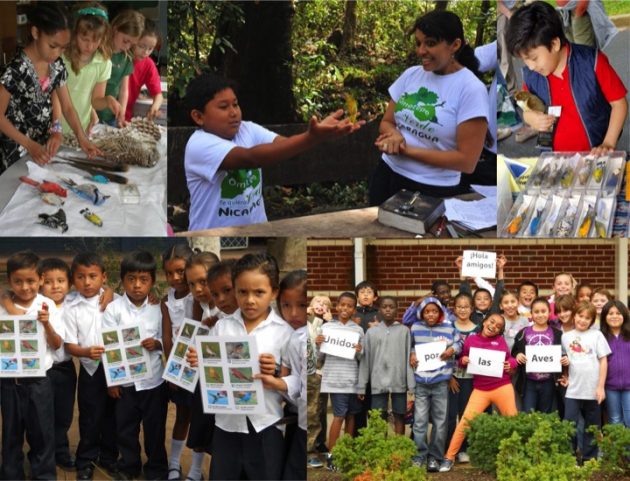 For students in Bridging the Americas classrooms both here and abroad, birds are the vehicle for close study of reading, writing, speaking, art, research, map-reading, and core concepts in biology, geography, earth science, ecology and civics.

Remote and disconnected from the mainland, Ometepe is an ideal refuge for many species. The island’s 35,000 people can access the mainland only by ferry. Thus shielded, the island’s rural soul has remained intact: its network of roads are mostly rutted dirt tracks, its residents build homes of wooden planks with grass roofs, and ox-carts traverse the roads alongside buses and very few cars. The lake teems with fish, and forests host howler monkeys, capuchins, parrots and dozens of other species of birds. 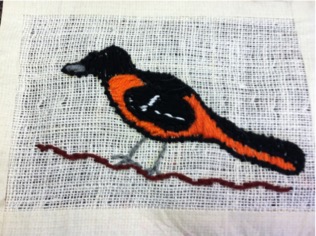 The artwork exchanged between U.S. and Nicaraguan classrooms participating in the Bridging the Americas program is often lively and colorful.

As one of 30 U.S.-based partner classes, teacher Indiana Obando’s classroom of second-graders at Bailey’s Elementary School in northern Virginia is busy preparing materials to share with their new friends in Ometepe. Obando, a native of Nicaragua, could barely contain herself when she learned about Bridging the Americas four years ago.

“Ometepe is where my aunt lives, and every summer I used to go there,” Obando says. “I really wanted my students to learn about this other culture, and put into practice what they are learning in class. Not only are they using Spanish outside the classroom, but there’s this extra connection, the birds, on both sides.”

Though the materials are targeted at students from second to fourth grade, some higher-level grades participate as well. Bailey’s Elementary and other U.S. schools in the program send their prepared materials near the end of the fall term, and receive reciprocal materials from their Nicaraguan partners just as birds are beginning their spring trek home. 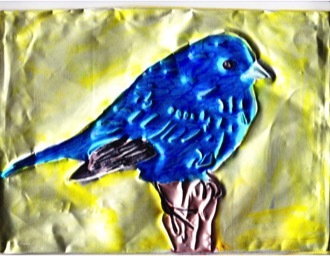 The artwork exchanged between U.S. and Nicaraguan classrooms participating in the Bridging the Americas program are often lively and colorful.

American students send reports on specific birds, art work with glitter and brightly colored paper, and decorations for their partner school’s classrooms. Nicaraguan students often send projects made with natural materials they have on hand: drawings of birds decorated with gathered feathers; and art with bark, volcanic sand and dried grass. Teachers like Obando use birds as the vehicle to relay other concepts in reading, writing, geography, science, cultural studies and more.

Last year, Obando’s students raised enough money to donate a refurbished computer to their partner classroom in Ometepe, which the Nicaraguan students were able to use to Skype with their American counterparts. With a grant from the Smithsonian’s Youth Access Grants Program, two other schools on Ometepe received 8 laptops, as well as wi-fi hardware and technology training workshops. 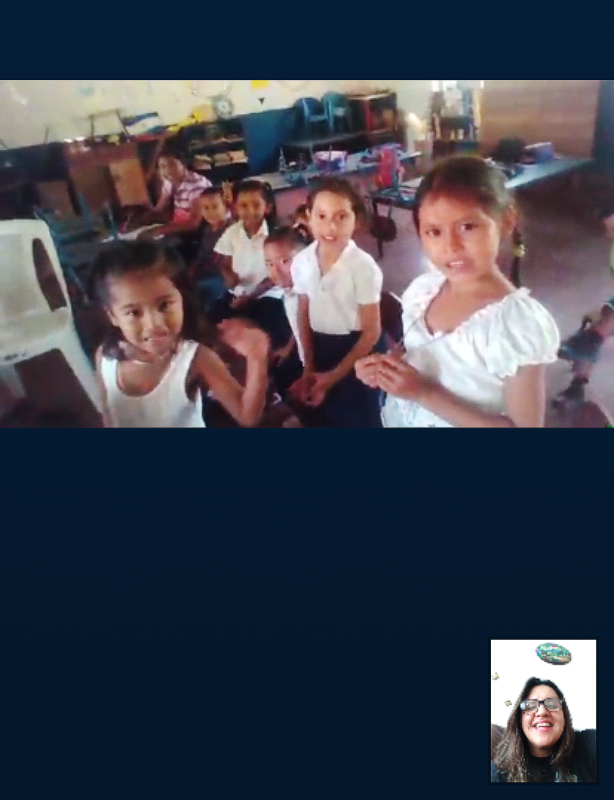 Students at a primary school on Ometepe Island in Nicaragua use Skype to say hello to their Bridging the Americas partner classroom at Baileys Elementary School in Virginia earlier this year. Though classrooms in Central America have corresponded with American partners since 1993, only recently has digital technology allowed them to communicate face-to-face. (Photo courtesy of Indiana Obando)

Though Obando said her students are ecstatic to receive projects, papers and presentations from Nicaragua, seeing their counterparts’ faces on Skype makes them almost close enough to touch, and infinitely more real. After asking prepared questions about what they’re learning and discussing birds, her second-graders pepper their Nicaraguan partners with questions. “What do you eat for lunch? What’s your favorite sport? We get snow days—do you get volcano days? Any pets? A horse, really?” 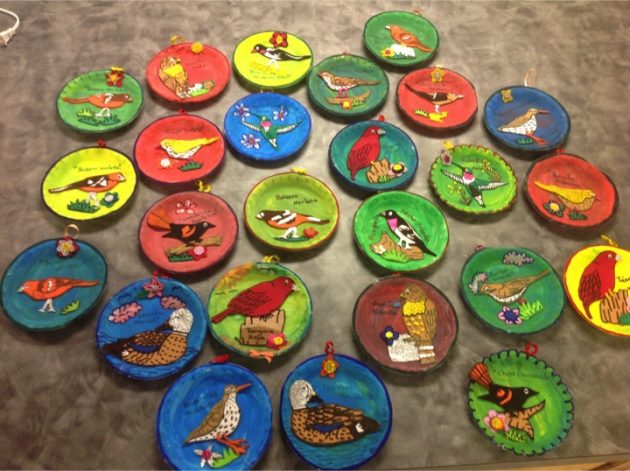 The artwork exchanged between U.S. and Nicaraguan classrooms participating in the Bridging the Americas program are often lively and colorful. Children on Ometepe also frequently use materials they gather from the natural environment around them to adorn and embellish their creations.

“They see that the students are the same anywhere you go, and it’s just the language and food that’s different,” Obando says. “I wish I’d had that growing up, having that kind of interaction. Even having a letter from a place far away, as a child, and then to imagine what it would be like to travel, or to be a bird and do that? It creates such an awareness.”

Christine Payack, who has traveled on several occasions with Deinlein to Ometepe, incorporated the migratory bird materials into her classroom studies for 6 years as a program participant. Now co-director of the Arlington County (Va.) school system’s Outdoor Lab, she stresses that even very young children can easily grasp complicated concepts like conservation and downstream side effects. 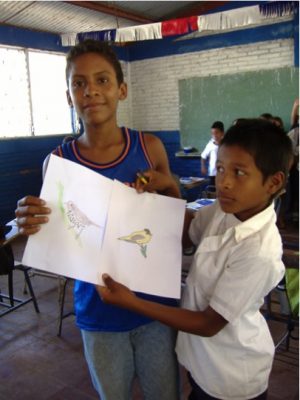 “Kids that age feel like they can take action,” Payack says. “You talk about helping birds, and my kids would ask, ‘How can anyone hurt a bird?’ So you can talk about hazards like flying into windows, and it becomes real to them. I believe that sense of conservation, being able to take action and be aware, stays with them all their life.”

And in Nicaragua, Payack says some students there started reconsidering the widespread playtime custom of using birds for slingshot target practice. As an ecotourism destination, the information exchange drives home for Nicaraguan students that harming their natural resources can damage an important economic catalyst for their area.

“We’re trying to make people more aware of these birds and emphasize that they’re reliant on habitats throughout the Americas,” Deinlein says. “It’s a lofty goal. A prerequisite for conservation is for people to know each other, to be able to understand each other and work together to protect these habitats.”