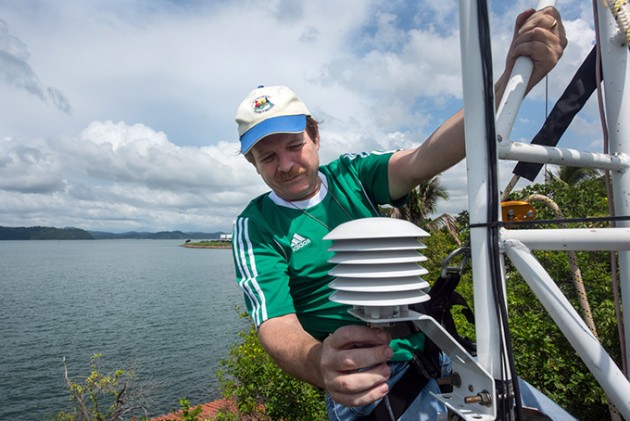 This year’s El Niño event is one of the strongest on record and is still ramping up. Large parts of the tropics are turning into a superheated lab, presenting rare research opportunities for Smithsonian scientists to understand climate change.

Central Panama, where the Smithsonian Tropical Research Institute (STRI) is based, is experiencing its driest year ever. Data suggest that the coming dry season is likely to start earlier than usual and be harsher than normal. Water restrictions and shortages are predicted.

Water reservoirs that supply the Panama Canal and the capital city are well below average. The biggest coral bleaching event in almost 20 years is unfolding along Panama’s Pacific coast.

For scientists, the worst-case scenario may be a unique chance to understand how the extremes presented by climate change modelers may play out in the tropics. 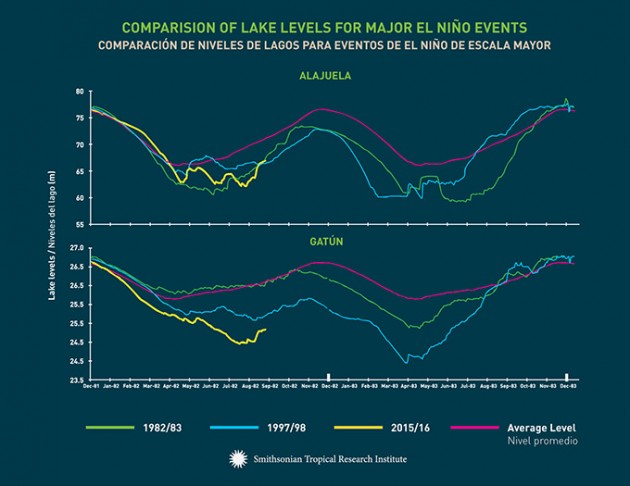 “We’re probably never going to get an opportunity like this again,” said Andy Jones, a STRI research associate and molecular ecologist at Oregon State University, who is part of a team that launched a Panama-wide experiment last year to study the effects of drought on plant survival and growth. “You can’t plan for these things,” Jones said in the most recent edition of STRI’s science magazine, Trópicos.

STRI’s long-term research sites are designed to capture the finest details of the El Niño event. The Panama Canal Watershed project is a 700-hectare area where scientists find out how different land uses—ranging from clear-cut cattle ranching to protected forests—impact ecosystem services such as water provision and carbon sequestration.

“A severe drought could be the single most important factor to shape the forest and its ability to capture carbon,” said STRI staff scientist and project director Jefferson Hall. Tens of thousands of individual trees, vines and seedlings are being closely tracked through the event. Hydrologists will also be closely measuring how much water is released by forested landscapes during the dry season as they gather more evidence that forests regulate flow and enhance stream flow during dry periods.

This El Niño is the third major El Niño event since forest ecologists set up a 50-hectare forest- dynamics plot on Barro Colorado Island, where researchers have conducted a census of more than 200,000 woody plants every five years since 1980. The 1982–1983 El Niño caused tree mortality to increase by 50 percent in one of the first studies to demonstrate the lethal effects of drought in mature tropical forests.

This year, STRI scientists put experiments in place to track how 16 tree species—broadly representative of the many hundreds of tropical tree species—respond to water stress. The work should greatly refine overly generalized climate models for carbon capture by tropical forests on a warming planet.

Forest ecologists will also build on STRI’s long-term studies of flowering and fruiting, which experience major extremes during El Niño-La Niña cycles and may lead to high mortality of mammals in tropical forests.

The last major El Niño event in 1997–1998 clobbered coral in some coastal areas of Panama. The coral largely recovered but is again bleaching at a rapid pace. This event will be closely tracked using genetic tools that were not available during the last event and may show that intermittent blasts of extreme heat are jumpstarting corals’ evolutionary machinery and making them more resilient to change.

The results could “drastically change predictions of the fate of coral-reef ecosystems globally over the next 100 years of climate change,” said the investigators, who include former STRI staff scientist Peter Glynn and colleagues from the University of Miami, UCLA and the University of the Virgin Islands.