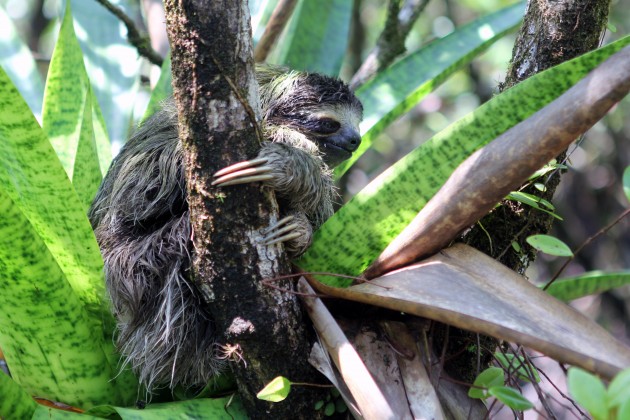 While the pygmy sloth is still considered critically endangered, Smithsonian research shows that there could be many more than once thought. (Photo by Bryson Voirin)

Size isn’t the only thing that’s small about the pygmy sloth―its population is too. But scientists at the Smithsonian say things may be looking up for this diminutive endangered species: Its population may be five times greater than the previous estimate of fewer than 500.

Found only on the tiny island of Escudo de Veraguas in the southern Caribbean, the population of pygmy three-toed sloths (Bradypus pygmaeus) doesn’t have much room to grow. They were thought to only inhabit the mangroves that run along the very edge of the island, which would restrict their population even more. But Bryson Voirin, a former fellow at the Smithsonian Tropical Research Institute in Panama, found that this is not the case.

Voirin placed radio collars on 10 sloths in the island’s mangroves and tracked their unhurried movements at three- to six-month intervals for three years. Only three sloths remained entirely within the mangroves. Five moved past the mangroves to other tree species, and four moved more than 200 meters inland—quite far for a sloth. Coupled with population density estimates and extrapolated across the island’s 430 hectares, Voirin reached a high-end estimate of almost 3,200 individuals. 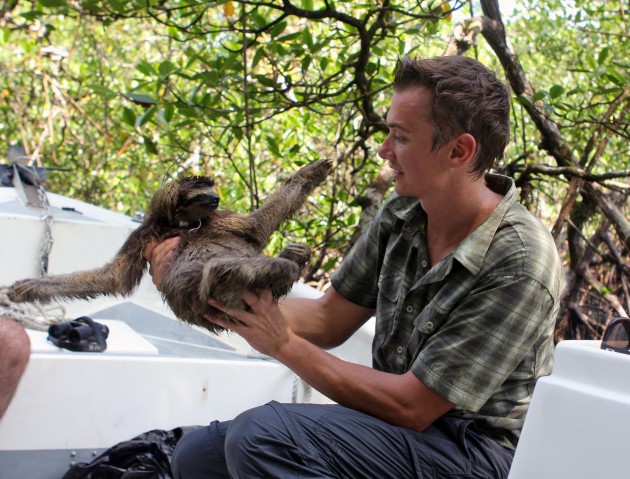 Bryson Voirin, former fellow at the Smithsonian Tropical Research Institute in Panama, placed radio collars on 10 sloths on the island of Escudo de Veraguas and tracked their unhurried movements. (Photo by Matthew Manupella)

“The actual population size is most likely somewhere between 500 to 1,500 individuals,” said Voirin, now a researcher at Germany’s Max Planck Institute of Ornithology. “In any case, this is an extremely small number for an entire species.”

The pygmy sloth’s sole home of Escudo de Veraguas separated from the mainland nearly 8,900 years ago. Over time the island’s sloth population became a distinct species through “insular dwarfism”―the natural process where large animals become smaller over many generations when their population’s range is limited to a small area, primarily islands. This critically endangered species is threatened by several factors, including habitat degradation due to timber harvesting, increased development, and collecting.

Voirin warned against too much optimism for the pygmy sloth’s critically endangered status. Escudo de Veraguas is only nominally protected and developers have the island in their crosshairs—one proposal calls for turning the place into a semi-autonomous tax haven boasting a marina, airstrip, casino and hotel.

Compared to the related brown-throated three-toed sloth (Bradypus variegatus), the pygmy species is on average 40 percent smaller in body mass, weighing 5.5 to 7.7 pounds, and 15 percent smaller in the adult’s body length―19 to 21 inches.

The pygmy sloth is listed as “critically endangered” on the International Union for Conservation of Nature’s Red List of Threatened Species due to its small and isolated range.

Future pygmy sloth research will involve deeper analysis of the species’ genetics and the diverse microbial community that lives on its fur. Voirin also hopes to better understand the sloth’s diet and population trends.

“Further scientific research on the pygmy three-toed sloth is much needed, and we hope we will continue to yield new insights into its life history,” he said. “Such research will not only help us to better understand the species, but will enable us to ensure that it persists into the future.”

Voirin published his research recently in the Journal of Mammalogy.