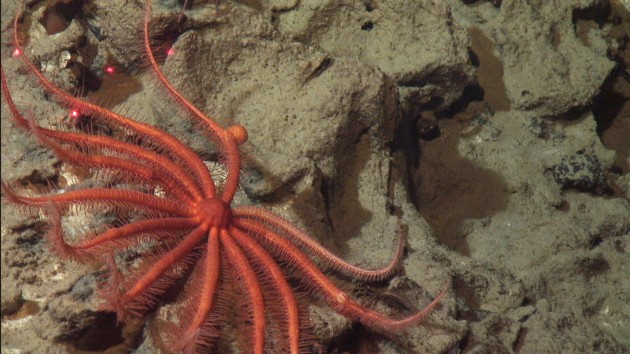 A brisingid starfish living on submerged munitions. Close examination of round galls found on a number of the starfish, as seen here, were determined to be caused by parasites and not by the residue of chemical weapons. (Photo courtesy Christopher Mah)

Surplus mustard gas canisters and unexploded bombs dumped in the Pacific Ocean near Hawaii after WWII, have become, scientists say, a potential reef that is home to numerous marine species, including brisingid starfish, sea anemones, mollusks, crustaceans and fish.

The debris field of discarded gas containers and other munitions, at a depth of between 1,476 to 2,200 feet (450 to 670 meters), “has inadvertently created an artificial reef for deep sea animals to settle upon,” says Christopher Mah, an expert in brisingid and other deep-sea starfish at the Smithsonian’s National Museum of Natural History, in Washington, D.C.

During recent studies to locate, map and assess the condition of the dumped chemical weapons and measure the impact they may be having on marine life, a research team using remote controlled submarines and underwater cameras observed a high number of organisms living on and around the munitions. Among them was a new species of brisingid, Brisingenes margoae, recently described and named by Mah in the journal Deep Sea Research.

This video shows a brisingid starfish being removed from a WWII munition by the robotic arm of an unmanned submarine and placed in a container for study. (Video: Hawaii Undersea Military Munitions Assessment)

Brisingids are a diverse family of deep-sea starfish that live the world over. Most have between six and 20 arms. They perch in the ocean current and spread their spiny arms—which are covered in tiny Velcro-like claws called pedicellariae—to snag shrimp, krill and other tiny organisms floating or swimming in the water. These “catches” are transferred to the starfish’s mouth by its tube feet.

“Because of their dependence on water flow to bring them food it behooves Brisingids to find places above the ocean floor where there is a good current. The military debris make ideal perches,” Mah explains.

Time-lapse video of brisingids and sea anemones, taken during the study, showed that their feeding behavior changed as the currents ebbed and flowed throughout the observation period, Mah says. “When observed most other times, these animals appear to be practically motionless but its now clear that they shift and change their arm and tentacle feeding posture to suit their environment as the water flow changes.”

This underwater time-lapse video shows how brisingid starfish shift and change their tentacle posture while feeding. Video frames were taken at 1-minute intervals. (Video by students from Iolani School in Honolulu, Hawaii)

Underwater video also revealed large numbers of brisingid starfish covering structures nicknamed “cable monsters,” wooden spools wrapped with cable that were dumped in the ocean along with the munitions. At the ocean bottom the wooden spools have dissolved, leaving behind a mass of rusty loose loops of cable that the starfish love.

“These structures form a large open metallic complex that seem to change the water flow around and through its openings,” Mah observes. “We believe this may provide optimal hydrodynamic flow for brisingid suspension feeding.”

Some 72 “cable monsters” have been observed so far during the study, each covered by large aggregations of brisingid starfish. 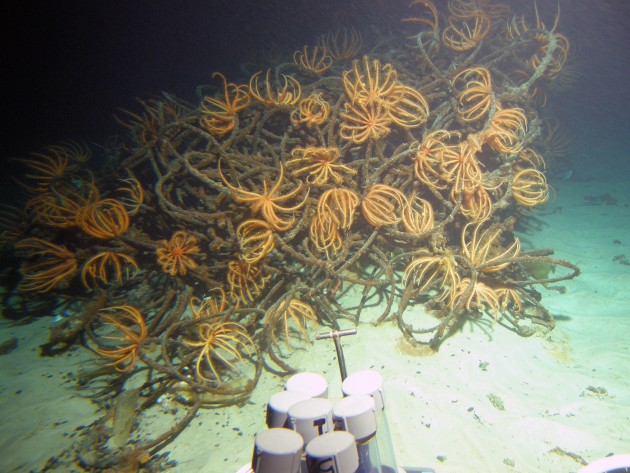 Brisingid starfish congregate on what researchers have come to call a “cable monster,” a wooden spool of metal cable dumped into the sea with other munitions. After the wood vanishes a mass of rusty cable remains. (Photo courtesy Christopher Mah)

Remarkably, the chemical weapons at the ocean bottom do not appear to be having any adverse effect on the starfish or other ocean creatures living on or near the canisters. Spherical galls observed on the arms of some of the seastars and examined in a laboratory by Mah turned out to be parasitic crustaceans and not caused by chemical weapons residue. A paper on the results of the munitions study was also recently published in the journal Deep Sea Research.

One new morphological character Mah discovered while describing specimens of the newly named B. margoae, are specialized spines used to anchor a starfish as it feeds. Mah noticed the tips of some of the spines on the specimens were a brown color, similar to the rusty munitions the animals were attached to when collected. This discoloration suggests these spines were lodged onto the metal bombs and are used to anchor the animals to their perch. The animal’s tube feet, used for locomotion, showed no discoloration.

(Visit “The Echinoblog,” by Christopher Mah)