A social media celebrity was born last week when the bright lights and camera of NOAA’s remotely operated vehicle Deep Discoverer zoomed in on a ghostly white octopod alone on a sediment-covered rock some 2½ miles deep in the ocean near the Hawaiian Archipelago. Its lack of pigment cells—called chromatophores—led internet viewers to suggest naming it Casper, after the friendly cartoon ghost. Internet blogs and news pages turned the octopus into an overnight cephalopod sensation.

“What’s really remarkable is that this is a fairly charismatic organism that we didn’t even know it existed until less than a week ago,” says Michael Vecchione, Zoologist at NOAA Fisheries’ National Systematics Laboratory and Curator of Cephalopods at the Smithsonian’s National Museum of Natural History. “It’s a really good example of how little we know about life in the deep sea. And of course, the deep sea is most of the living space on our planet. So it’s a good illustration of how little we know about life on our own planet.”

While the octopod is almost certainly an undescribed species, Vecchione says, truth be told, “new species in the deep sea are a dime a dozen.” What’s most notable is that “it is the deepest record for this type of animal—an incirrate octopod.” Incirrate octopods, unlike deep-sea “dumbo” octopods, have no fins on the sides of their bodies and no finger-like structures near the suckers on their arms. Incirrates are common in shallow water. 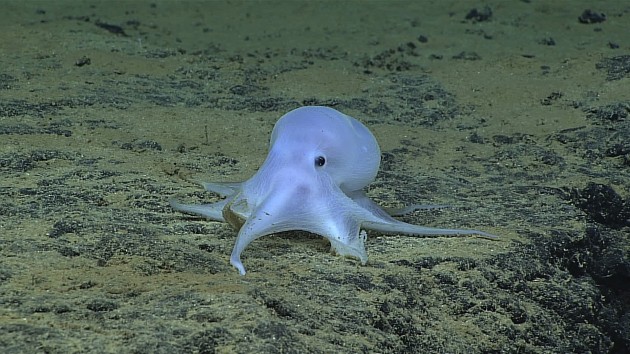 This ghostlike octopod is almost certainly an undescribed species and may not belong to any described genus. Image courtesy of NOAA Office of Ocean Exploration and Research, Hohonu Moana 2016.

Vecchione: No. Lack of pigment is one of the patterns that you see in deep sea animals. There are several groups of deep dwelling animals that are less pigmented than their shallow dwelling relatives. While there is no sunlight at that depth there is light that is produced by bioluminescence, which is why deep dwelling animals still have functional eyes.

Vecchione: Fins are hydro-dynamically more efficient than jet propulsion for swimming [a standard locomotion for shallow-water octopods]. Because the deep sea is a low-food environment, having low-energy locomotion makes sense.

Q: Any idea how large this new octopod is?

Vecchione: Deep Discoverer has a laser measurement system that uses two parallel lasers 10 centimeters apart and it was turned on during part of the video. Based on that I think the total length of the animal was a little over 10 centimeters maybe 12. Its mantle length [the part of the body above the head, a standard cephalopod measurement] was maybe 5 centimeters. 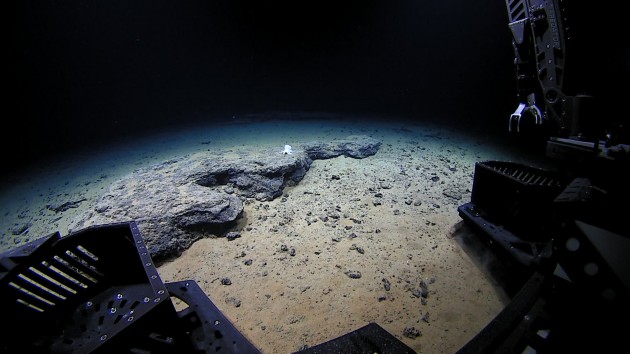 Q: Care to guess how old it is?

Vecchione: There’s no way of knowing. We used to assume that all cephalopods basically live very short lives but it turns out that this is not necessarily true for deep sea stuff.

Q: What do they eat?

Vecchione: What you saw in that video is everything we know about that species. I could speculate it probably was looking for some food or might be looking for a mate, standard biological stuff….

Q: At 2½ miles deep how does this animal survive the crushing water pressure?

Vecchione: From our experience the water pressure is high but it is normal for an animal that lives there. Usually people think in terms of water pressure crushing something, but this animal has no gas spaces inside it to be compressed, so the pressure inside the animal is the same as the pressure outside the animal. It does have three hearts that pump blood around in its body by creating pressure in the circulatory system that is independent of the pressure difference between the inside and the outside of its body. It has one systemic heart in the center of its body and one auxiliary heart associated with each of its two gills.

Q: Can scientist describe a new species like this from just a video?

Vecchione: Even though there have been species described based on photographic evidence, it is not the best way to go. You pretty much need at least one specimen in hand and preferably several so you can assess variability. And a modern description usually includes a DNA sequence generated from the animal’s tissue. I am not planning on formally describing and naming this octopod until I get my hands on a specimen.

Q: How do you know it’s not an albino?

Vecchione: The eyes are pigmented, so it is unlikely to be an albino.

Q: Deep Discover was launched from the NOAA ship Okeanos Explorer. What is the aim of these deep sea explorations?

Vecchione: Despite the role that the ocean plays in supporting our wellbeing, 95 percent of the world’s ocean remains unexplored. Increasing baseline knowledge of ocean habitats is critical to the conservation and preservation of these ecosystems. Exploratory missions, such as those conducted on the Okeanos Explorer, are necessary to expand our knowledge of the unknown and to provide baseline data for resource managers.

A few of the objectives for this current expedition in Hawaii include: Mapping; acquire data to support monument and sanctuary science and management needs; discover and characterize vulnerable marine habitats, particularly high-density deep-sea coral and sponge communities, and to collect data and geologic samples to characterize seamounts within the Prime Crust Zone.