Scientists from the Fisheries Service of the National Oceanic and Atmospheric Administration recently captured a giant squid while conducting research off the Louisiana coast in the Gulf of Mexico. The specimen is the second known giant squid obtained from the Gulf of Mexico, the first was collected in 1954 off the Mississippi Delta where it was found floating dead at the surface. 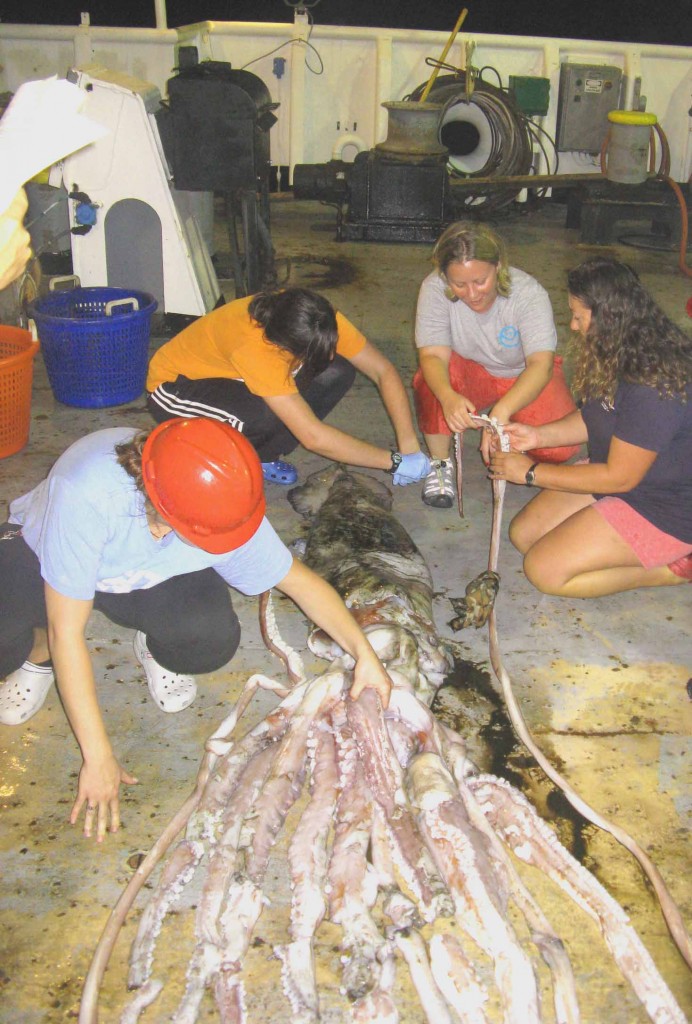 Photo: Scientists aboard the NOAA research vessel Gordon Gunter, examine a giant squid they caught in the Gulf of Mexico off the coast of Louisiana.

This animal was collected during a 60-day scientific study in which NOAA scientists were studying the availability and diversity of sperm whale prey. The squid was caught in a trawl net pulled behind a research vessel at a depth of more than 1,500 feet.

This giant squid was preserved and sent to the Smithsonian’s National Museum of Natural History in Washington, D.C. for further study. It measures just over 19½ feet long and weighs 103 pounds. Photographs of the specimen were sent from the research vessel to squid experts at the NOAA’s National Systematics Laboratory at the National Museum of Natural History. Experts at the Smithsonian, the University of Miami and Texas A&M University all confirmed the specimen was in fact a giant squid.

“This is an incredibly rare find in the Gulf of Mexico,” said Michael Vecchione, director for NOAA’s Fisheries Service’s National Systemics Laboratory and a giant squid expert. “Giant squid have been found more commonly in areas of the world where there are deep-water fisheries, such as Spain and New Zealand, but this is the first time one has actually been captured during scientific research in the Gulf of Mexico.”

According to Vecchione, scientists have known giant squid are in the Gulf because remnants of them have been found in the stomachs of predators (such as sperm whales) from Gulf waters, as well as from nearby waters of the Caribbean and Florida Keys. This find illustrates how little we know about what is swimming around in the deep waters of the Gulf of Mexico.

Giant squid are difficult to capture, but they are usually found in continental-slope areas, where the relatively shallow water near the continent drops off into the deep sea. They seem to be concentrated in places where undersea canyons cut into the slope, where they feed on fishes and other squids.

At the National Museum of Natural History, the giant squid will be archived and studied by Vecchione and other researchers. Vecchione noted that the specimen is an important addition to the worldwide study of giant squids and their biology.

Gulf of Mexico survey will benchmark diversity of ocean floor