Found worldwide in tropical and subtropical seas and oceans, Dolabrifera dolabrifera is a species of sea hare, a marine gastropod mollusk in the family Aplysiidae. Researchers working at the Smithsonian Tropical Research Institute in Panama discovered that the digestive gland of D. dolabrifera contains a compound active against Leishmania donovani, the parasite primarily responsible for visceral leishmaniasis, a devastating tropical disease spread by sandflies. If left untreated, this form of leishmaniasis can have a fatality rate as high as 100 percent within two years. 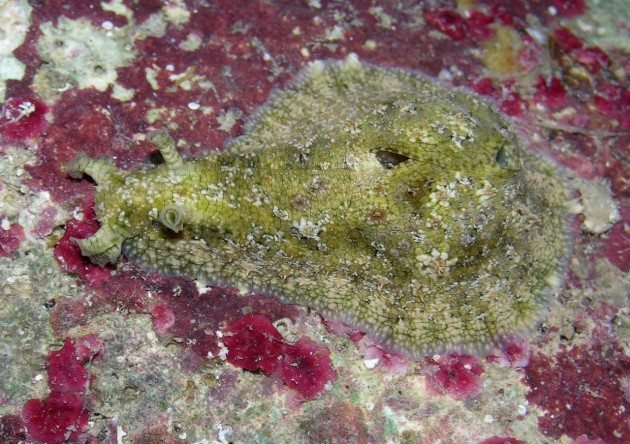 This species of sea hare is known scientifically as Dolabrifera dolabrifera. (Photo by Nestor Ardila)

The sea hares were collected from Pacific ocean tide pools on Panama’s Coiba Island by STRI botanist, Alicia Ibañez, and Alicia Hermosillo from the Universidad de Guadalajara. Many soft-bodied organisms such as sponges, tunicates, octocorals and sea hares, living in tropical marine ecosystems use chemical compounds to defend themselves against predators.

“This is one of more than 45 compounds with potential pharmaceutical activity that we’ve reported from Coiba National Park and World Heritage Site so far,” said Todd Capson, who played an instrumental role in the protection of the park, is one of the founders of the Panama International Cooperative Biodiversity Group, and a participant in the Neotropical Environment Graduate Option, a collaborative effort between Smithsonian Tropical Research Institute and McGill University. “NEO and the ICBG promote multidisciplinary efforts like this one that brought together ecologists, experts in tropical disease drug discovery, natural product chemists, and students from McGill University as a team.”

Their publication is the first reported isolation of a compound from Dolabrifera dolabrifera with potential as a treatment for any disease.

The chemical, an epidioxysterol, has been isolated from other marine organisms. The authors suggest that chemists should base new approaches to synthesizing compound for the treatment of Leishmaniasis on the activity of this group of chemical compounds.