To hunt, bats listen for signals in prey mating calls 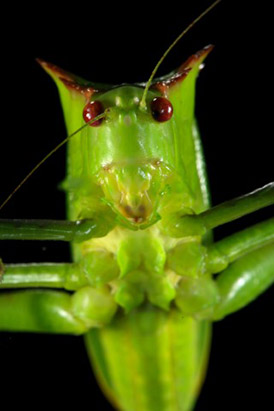 Male katydids, such as this Steirodon careovirgulatum, attract females with mating calls, which unfortunately also cue predator bats to their whereabouts. (Image by Christian Ziegler)

When it’s time for a meal of katydids, bats use their ears. When hunting and eating male katydids, different bat species locate their prey by listening for specific signals in male katydids’ mating calls, according to a recent Cornell, Dartmouth and Smithsonian Tropical Research Institute study. Furthermore, the researchers found that each bat species differed in its preference for katydid species, and those preferences were based on unique aspects of the katydid calls.

Published May 20 in Proceedings of the Royal Society B, the study is important because bats consume insects even more voraciously than birds – a service beneficial to plants – which has ecological implications for tropical forests and agriculture.

“When we broke down the katydid calls into different aspects, we found that each bat species seemed to be paying attention to different call features, which led to the preference for different katydid species,” said Jay Falk, a graduate student in the field of neurobiology and behavior, who is a first author of the paper along with Hannah M. ter Hofstede of Dartmouth College.

Their study looked at four bat species and 12 katydid species found on Barro Colorado Island, which is located in the man-made Gatun Lake in the middle of the Panama Canal. Barro Colorado, operated by Smithsonian’s Tropical Research Institute, is one of the world’s oldest field research islands.

This video shows a stripe-headed round-eared bat (Tonatia saurophila) locating the mating call of a male katydid being played from a camouflaged speaker on a table.

The researchers looked at the principle of niche partitioning, which states that two species in the same niche, or ecological distribution of resources, cannot co-exist. Partitioning refers to a species’ area of an ecological niche and can be determined based on behavioral, morphological or, in this case, sensory-based differences.

The researchers caught four species of gleaning bats – varieties that pluck prey from foliage or the ground – placed them in a large outdoor enclosure and played recordings of 12 katydid species on a speaker covered in leaves. If the call appealed to a bat, it dive-bombed the table, in search of prey.

“These bats that are very similar ecologically but they differ in their preferences, and those differences are sensory based,” Falk said. In this way, “niche partitioning can allow more bats to co-exist, to eat more katydids,” as preference differences might decrease competition between the many bat species on the island, Falk said. The study “helps us understand diversity and why and how we can have so many species on the planet,” he added.

The study also has pushed the boundaries of how scientists define the ecological role of species, which may be similar physically but different either behaviorally or in some sensory capacity, for example.

Future work will examine how katydids attract females with their calls and still avoid predators, and how such sensory-based predation affects katydid evolution.

Both Falk and ter Hofstede worked in the lab of the paper’s senior author, Rachel Page, a researcher at the Smithsonian Tropical Research Institute (STRI).

The study was supported by the STRI, the Natural Sciences and Engineering Research Council of Canada and the National Science Foundation.