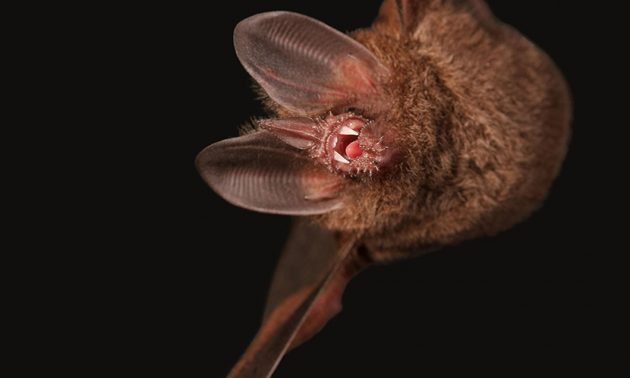 Like many predators, the fringe-lipped bat primarily uses its hearing to find its prey, but with human-generated noise on the rise, scientists are examining how bats and other animals might adapt to find their next meal. According to a new study, when noise masks the mating calls of the bat’s prey, túngara frogs, the bat shifts to another sensory mode—echolocation.

Echolocation is a way of sensing objects and movement by scanning the environment with high frequency sounds and evaluating the reflections. Studying the ability or inability of animals to shift sensory modes could be important in understanding how to protect threatened or endangered species.

The work appears this week in the journal Science.

This video shows a fringe-lipped bat attacking a robotic frog with and without pieces of fish added as a reward. (Video by Barrett Klein and Andy Quitmeyer)

“If there’s just one person talking and it’s quiet, all we have to do is listen with our ears,” says Ryan. “But if there are more and more people talking, we have to be looking at them to figure out what each person is saying. So we have to recruit this other sensory channel we have, our eyes, to help us figure out what we’re hearing.”

In this case, the bats are shifting from detecting one kind of sound—the low frequency mating calls produced by the frogs—to the high frequency sounds emitted by the bat to navigate and hunt with echolocation. Unfortunately for the frogs, when they produce mating calls, they’re really sending two signals: the sound intended to attract females and the movement of their vocal sacs, which inflate quickly like a balloon. 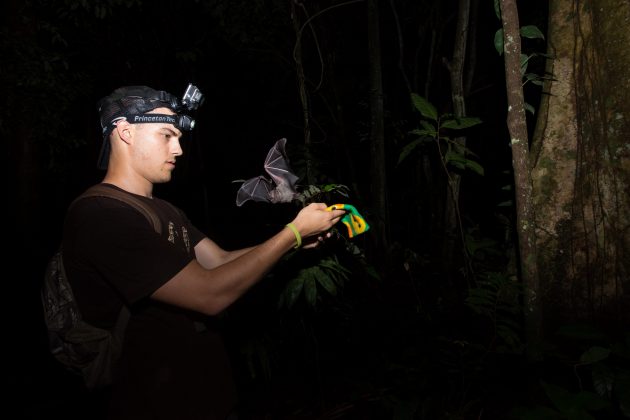 The researchers speculate that predators that can shift their sensory mode will do better in noisy environments, and this in turn might alter the long-term success of specific predator and prey species.

“Our study ties together behavior, sensory ecology and conservation,” says Dylan Gomes, the lead author who conducted the research during an internship at the Smithsonian Tropical Research Institute (STRI) in Panama. “As sources of anthropogenic noise continue to expand, animals will ultimately have to face noise in one way or another.”

Research into the effects of human-generated noise on animal behavior has primarily focused on birds and whales, says Gomes, who is now a Fulbright scholar at the Max Planck Institute for Ornithology. The impact of noise on bats, however, is a relatively new field of study. 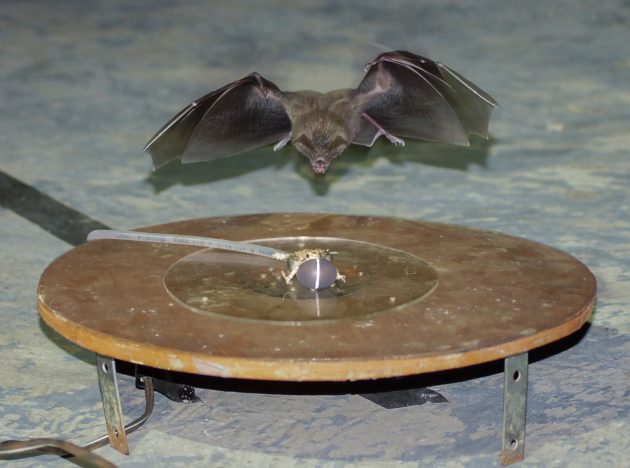 The team used two robotic frogs that precisely mimic the calls and vocal sac expansion of the túngara frog. The robofrogs were placed inside a flight cage with the fringe-lipped bat. One robofrog played the frog’s distinct mating call, with the other playing the call and expanding its robotic vocal sac. When the researchers played a masking noise over the call, the hunting bat’s echolocation activity increased and it more often attacked the frog emitting both signals than the frog emitting just mating calls. Without the masking sound, the bat attacked both frogs equally. 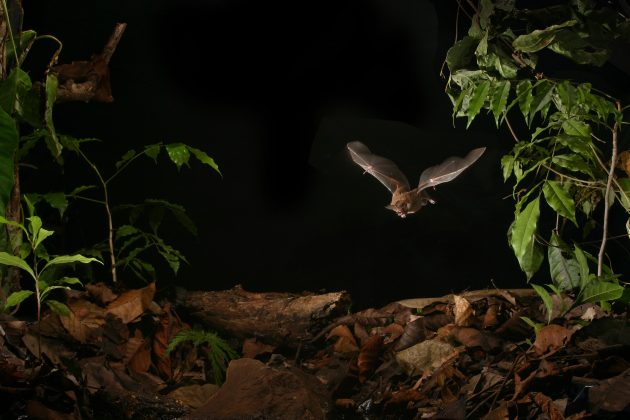 The fringe-lipped bat foraging above the forest floor. (Photo by Alex Lang)

“We show how animals can adapt to increased noise levels by making use of their other senses, which has important implications for other species that try to find prey, avoid predators or attract mates in human-impacted environments,” says Wouter Halfwerk, a professor at VU University Amsterdam and a former postdoctoral researcher in Ryan’s lab.

Halfwerk helped design the experiment and was Gomes’ co-adviser. Smithsonian Tupper fellow Inga Geipel, who specializes in echolocation and studies how bats navigate and hunt in the rain, contributed her technical expertise to the research. The study was carried out under the guidance of STRI staff scientist Rachel Page, and Ryan, a long-time STRI research associate. Page worked previously as a graduate student in Ryan’s lab.

Funding for this research was provided by the National Science Foundation and the Smithsonian Tropical Research Institute.

To hunt, bats listen for signals in prey mating calls