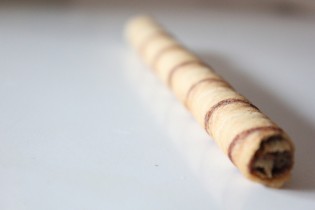 Forget what you thought you knew about geology. Some minerals can roll up like flaky Belgian piroulines.

For the last several decades, mining operations in Tanzania’s Merelani region have focused primarily on producing tanzanites, the brilliant purple-blue gem that made the area famous. Other “bycatch” minerals, brought to the surface but valueless compared to tanzanites, were mostly ignored.

Michael Wise, a geologist at the Smithsonian’s National Museum of Natural History, found a tiny and very odd mineral hiding in the cracks of some of these discarded minerals that caught his attention.

Unlike many crystals, this unknown mineral doesn’t form smooth faces or sharp angles. Rather, it looks like a very fine wire composed of ever-smaller concentric layers. 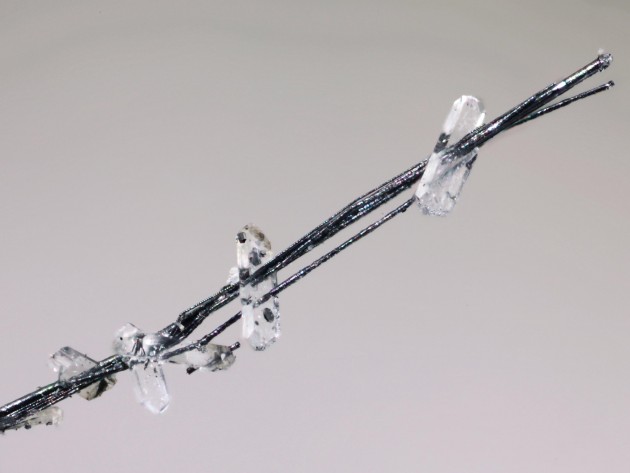 Though the molybdenum sulfide whiskers appear as if they’re growing through stilbite crystals, the clear crystals probably formed after the whiskers did. (Photo: John A Jaszczak)

Best seen under a microscope, the largest known specimen measures no more than a centimeter long, about the length of a standard paper staple. To the naked eye it looks like a sooty crust. Wise is currently trying to determine the exact composition of the mystery mineral, and how it came to be rolled up like a newspaper used to swat a fly.

The mystery mineral first came to Wise’s attention in 2012, when a young mineral collector brought in a relatively common mineral, prehnite, with an uncommon color. Normally a sea-foam green or chartreuse hue, her specimen was robin’s-egg blue, and from the renowned Merelani deposit.

Looking more closely, the geologist and the student began noticing some very odd debris nestled into the crevices between the individual prehnite crystals. Magnified, the crust revealed several tube-like whisker formations grouped together with other minerals. 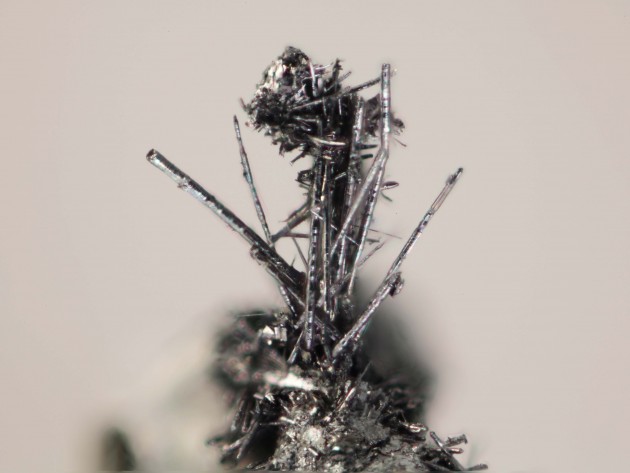 “I saw them and said, what are these things?” Wise recalls. They didn’t look like anything previously reported from the region.

X-ray diffraction—a technique that reveals information about a mineral’s atomic structure—suggested the mineral might be molybdenite. But when preliminary chemical analysis  did not confirm that, Wise had to revise his original notion.

Additionally, electron microscopy showed a very strange crystal structure: layers like a sheaf of rolled-up papers, some of which came to a point like a needle.

“This is really bizarre stuff,” Wise says. “It started out as wanting to know why this prehnite is blue, but it deviated and took on a life of its own. We got so sidetracked and interested in the wires—it’s potentially a new mineral species.”

In addition to trying to nail down the mystery mineral’s exact chemical signature, Wise said another conundrum is to figure out how, exactly, it forms into a tube.

“We had a great deal of fun debating how these formed,” Wise says. “How do you take a mineral and roll it? Or does it form that way naturally?” 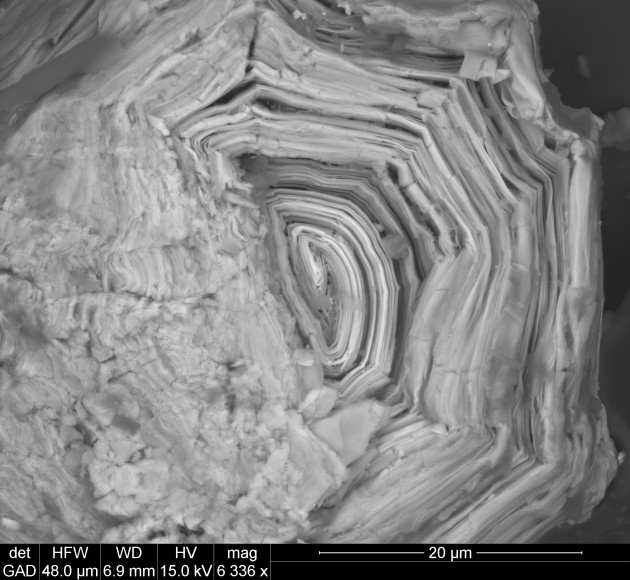 This electron microscope picture of the broken end of a molybdenum whisker shows the curious arrangement of the mineral’s concentric layers. (Photo by Michael Wise, NMNH)

Tube-shaped crystals are not common in nature, but neither are they totally unheard of. Molybdenite rarely occurs as whiskers in nature, but similarly shaped whiskers have been grown in laboratories, hence Wise’s original guess at the mineral’s identity.

John Jaszczak, a professor of physics at Michigan Tech and one of Wise’s collaborators on a recent paper on the Merelani minerals, analyzed the unknown mineral. He thinks it’s possible the tubes were not rolled by some weird geologic process.

Instead, he suggests the  whiskers grew as concentric tubes, with an asymmetrical molecular structure that causes a curve-inducing tension. The mineral cylindrite is grown this way in the lab; so are carbon nanotubes. 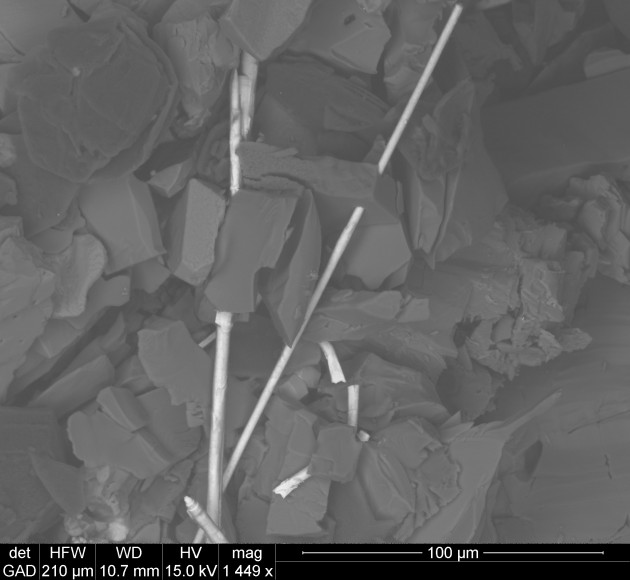 “The starting point for growth is the strain in the alternating stacking of the different metal-sulfide layers, and that strain causes curvature,” Jaszczak said. “They’re inherently strained because of the crystal’s structure.”

Up to 100 new mineral species are discovered and described each year. Wise is still refining the chemistry to come up with an exact formula for the new mineral. It was a stroke of luck that this mystery mineral was found at all.

“This crust where the whiskers normally are found often gets cleaned off to make the mineral specimens, like the prehnite, look prettier and more aesthetic,” Wise said. “Fortunately, we’ve found a lot more in the same area. But it was here all along.”