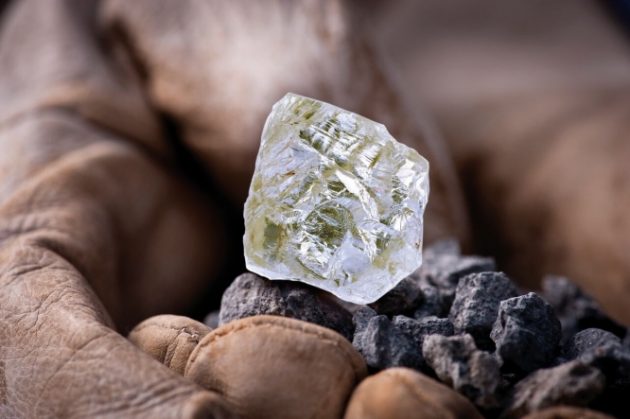 The Foxfire diamond is the largest known uncut, gem-quality diamond mined in North America and is on display at the National Museum of Natural History in Washington, D.C. through Feb. 16. Weighing more than 187 carats, it is displayed with the renowned Hope diamond in the museum’s Harry Winston Gallery. (Photo courtesy Amadena Investments LLC)

Several weeks before it went on display in mid-November at the Smithsonian’s National Museum of Natural History, minerals curator Jeff Post stood in the museum’s secure gem vault with this very large and very strange diamond in his palm. He motioned for the lights to be switched off just as he flipped on a long-wave ultraviolet lamp.

“Diamonds can have some interesting properties if you expose them to UV,” Post said.

This particular diamond doesn’t look like a normal gem. For one, it is rough, still in the same uncut state in which it was unearthed in August 2015 at Diavik Diamond Mine in the Barren Lands of Canada’s Northwest Territories, approximately 130 miles from the Arctic Circle. For another, it is enormous: at 187 carats, it’s the largest gem-quality diamond ever discovered in North America. If you didn’t know any better, you might easily mistake it for a chunk of ordinary glass. 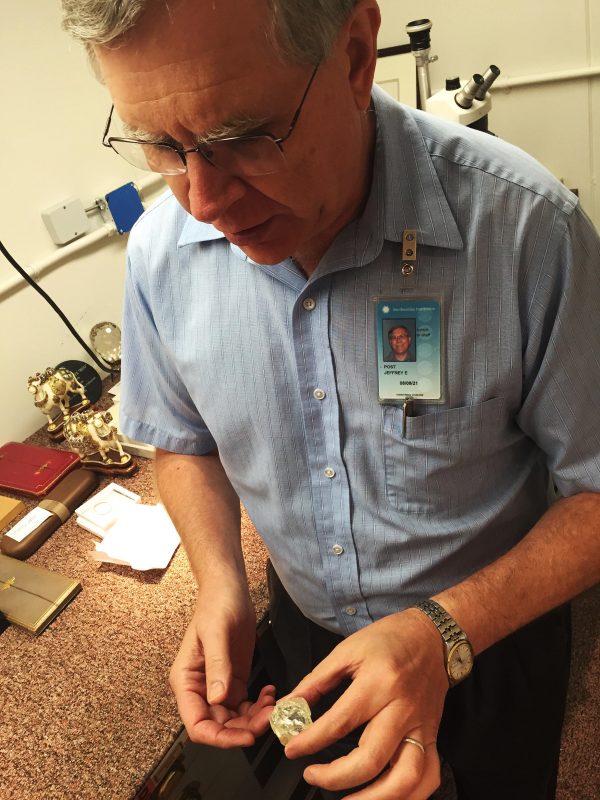 Jeff Post, chair of the minerals department at the National Museum of Natural History, turns the Foxfire diamond over to demonstrate its yellowish hue, which suggests nitrogen impurities within its crystal structure. (Photo by Michelle Z. Donahue)

But mere glass it is not. Named after the aboriginal description of the resplendent northern lights that light up the Arctic sky like a brush of undulating fox tails, the Foxfire diamond more than deserves its moniker. In the dark, under Post’s black light, the hunk of diamond crystal glows an intense neon blue, shining as brightly as a light bulb.

Many diamonds exhibit this sort of behavior, but what makes this one curious is what it does after the UV is switched off. For several long seconds, it emits a peachy-orange light, its crystal structure’s electrons discharging energy collected from the UV irradiation. After that color fades, the diamond continues to emit a ghostly white light, or phosphorescence, for several minutes. Usually a diamond’s afterglow fades within seconds, but the Foxfire shines on.

“That’s wild,” says Mike Wise, a museum geologist in attendance at the demonstration. Seeing the Foxfire in person for the first time, “The pictures don’t do it justice,” he observes.

The viewing in the vault that November day took place shortly after the diamond had arrived at the museum, on temporary loan from a private collector. Despite being quite clear, the stone’s slightly yellowish cast hinted to Post that it contained some nitrogen. Curious to better understand what elements in the Foxfire’s structure might be contributing to its incredible reaction to ultraviolet light, Post set about collecting data before the diamond went on public view. 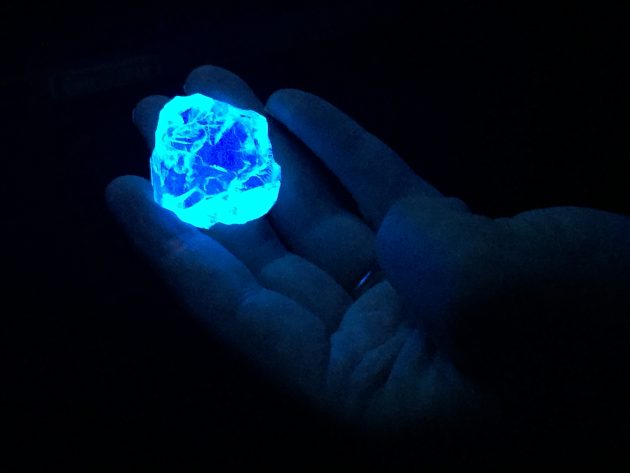 The 187.7-carat Foxfire diamond, the largest gem-quality diamond ever to be discovered in North America, displays unusually bright fluorescence when exposed to ultraviolet light. It continues to emit light, or phosphoresce, once the light is switched off, also for an unusually long period of time. (Michelle Z. Donahue photo)

Post, together with longtime collaborator “Diamond Jim” Butler, a former chemist at the U.S. Naval Research Laboratory who has assisted Post with in-depth analyses of the Hope and Wittelsbach-Graff diamonds, used a spectrometer to measure wavelength emissions from the Foxfire’s phosphorescence.

Interpreting the positions and intensities of the peaks on the resulting graph can give insights into the electronic structure of the diamond, such as how much nitrogen might be incorporated into its crystal lattice, or if energy gaps exist. In addition to influencing the color of a diamond under natural and UV light, variances in the molecular makeup of diamond’s crystals also contributes to its strength and brittleness.

Understanding how diamonds are able to emit light requires a bit of basic physics. Each molecule of carbon, nitrogen and hydrogen (as well as every other element) is made up of a nucleus surrounded by electrons swirling at different energy levels. These electrons can jump to different energy levels when excited. Ultraviolet light, which consists of high-energy waves, does the trick, causing the electrons to pop into different energy states. Remove the UV light, and electrons gradually return to their original state, releasing that stored energy as light while they settle back down. 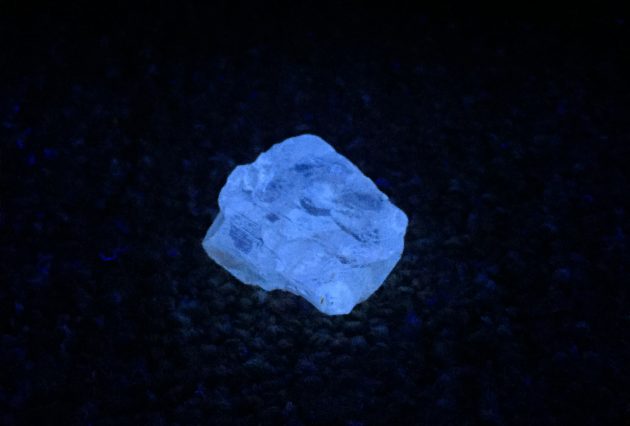 Analyzing that light gives information about what causes the phosphorescence. In the Foxfire’s case, Post says, the rare and long-lived afterglow is almost certainly caused by nitrogen impurities, though what the exact structural differences are is still unclear.

“Knowing more about diamonds like the Foxfire enhances our knowledge of the material and the overall database for materials like it,” says Butler, who studied the physical properties of diamonds and developed a wide array of applications for diamond films, coatings and crystals at the Naval Research Laboratory. “I might need to know what kind of defects I want or don’t want in a material so I can engineer it to that specification. So while it increases our basic knowledge, it is also critical to how we explore materials and technology.”

Based on dating of other minerals from the deposit where the Foxfire was found, the diamond is thought to be about 2 billion years old. Post likens it to an ancient messenger from the interior of the earth, not unlike meteorites that come to our planet from long ago and far away.

Even in the world of rare stones, Foxfire is a freak. It was buried in a place where big gem-quality diamonds aren’t supposed to exist. A Rio Tinto Group ore processor was configured to discard it. And what saved the diamond’s 187.7 carats from being pulverized was a fluke: Its unusual, elongated shape allowed it to slip sideways through a filtering screen.

“Maybe it’s something about how it formed that’s different,” Post muses. “Every diamond has its own story. They all came from deep in the earth and survived this journey to the surface. Each one is carrying its own little packet of information in different ways. If you look at many diamonds you begin to see some patterns repeated over and over.

“The Foxfire is truly exceptional, one of the great treasures of the Earth,” Post continues. “When you see something different, you hope that gives you a clue to something that is going on that you didn’t know before,”

Post and Butler intend to resume their study of the Foxfire diamond when it comes off display at the Natural History Museum on Feb. 16. Until then, “we are delighted that our visitors will have this once-in-a-lifetime opportunity to view North America’s largest gem-quality diamond in its natural form,” Post says.